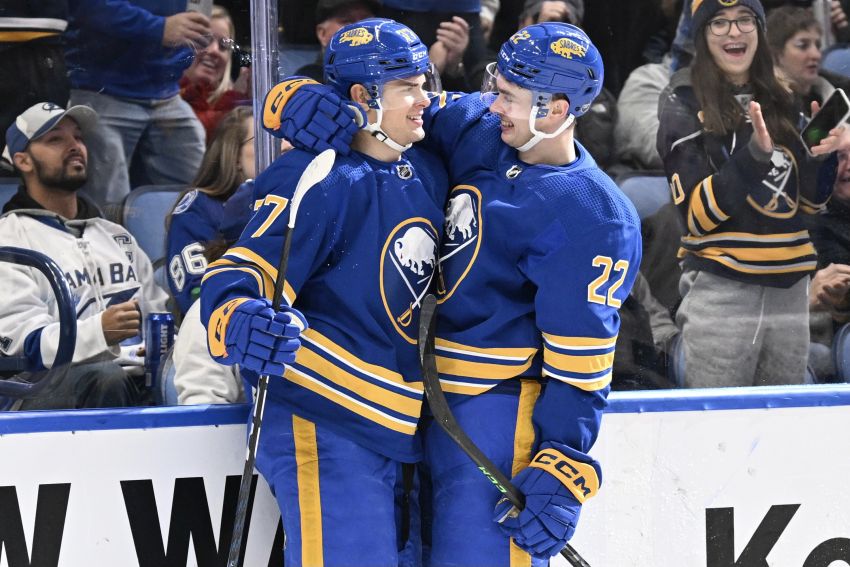 BUFFALO – Winger JJ Peterka scored perhaps the most scintillating of the Sabres’ 114 goals this season because he possessed the confidence to thread the puck through Los Angeles Kings defenseman Drew Doughty.

Think about it, a rookie just 31 games into his NHL career believed he could beat a 15-year veteran and the 2015-16 Norris Trophy winner.

“He’s not afraid to try those things and he’s confident in his abilities to execute them,” Sabres winger Tage Thompson said of Peterka following Wednesday’s practice at KeyBank Center.

Peterka’s adroit pass to rookie winger Jack Quinn on a nifty give-and-go in Tuesday’s 6-0 victory was just one part of a goal that Sabres coach Don Granato said “you can hit replay on a few times.”

After center Dylan Cozens won a battle at center ice and dished the puck up, Peterka fed Quinn from the right circle, finding some space between Doughty’s skate and knee.

Quinn grabbed the puck at the edge of the slot and quickly backhanded it back to Peterka, who had a yawning net because Quinn pulled goalie Pheonix Copley to him.

“We kind of know where each other are almost all the time,” said Quinn, whose Sabres begin a three-game road trip tonight against the Colorado Avalanche. “That play doesn’t happen if he doesn’t get it through Doughty’s feet, which not many guys are even going to try to make that pass over. So it kind of starts with him.”

Peterka said Quinn “was actually expecting the pass to come to him.”

The genesis of plays like that can be traced back to last season, when Peterka and Quinn spent nearly all year together, learning each other’s instincts as rookie linemates with the Rochester Americans.

Both prospects lived up to the enormous hype that accompanied them to the AHL as high draft picks.

“Since Day One last year in training camp we played together, I believe, in our first game, first exhibition game here,” Peterka said. “From there on, it was kind of like the whole time finding each other.”

The youngsters’ friendship off the ice also buoyed their development.

“It just makes it easier with someone to go through it with and in such a similar situation,” Quinn said. “We’re roommates on the road, really close friends. Just it’s that familiarity aspect of you have someone that’s going through the same thing as you.”

The Sabres resisted any urge to rush them to the NHL. Other than awarding them each a two-game look, they stayed in the minors all season.

“I was excited for the challenge,” Quinn said. “And I think playing at that level and learning to play against tough competition and kind of being the guy has helped me in a lot of ways and learned a lot of good lessons that hopefully I am taking into this year and for years to come.”

Peterka, who had two seasons of pro experience in his native Germany, said the AHL offered him more practice time and longer sessions.

He and Quinn also had an opportunity to learn from Amerks assistant coach and ex-Sabres captain Michael Peca, one of the best two-way forwards of his generation.

“Michael Peca, I would say, was like really helping us down there finding our game and getting us more to be a pro,” Peterka said.

Still, their brief taste of the NHL last season proved beneficial, helping them gain a better understanding of the big leagues.

“It kind of like showed you how close you are to your dream to play in the NHL,” Peterka said. “I think that was really important.”

By late last season, it became evident Peterka and Quinn would graduate to Buffalo after one full year in Rochester. This season, they’ve showcased growth almost each week.

In late October, the Sabres essentially scratched Quinn twice so he could catch his breath and study the game. On Saturday, he had a six-game point streak snapped.

Peterka and Quinn have recently been skating with Cozens, forming two-thirds of what has quickly become a formidable second scoring line.

Quinn has scored five goals and 12 points in the last 12 contests. Peterka has recorded four goals and seven points in his last 11 outings.

“Those three together, at any moment they’re dangerous because they see and read plays defensively so well and they read plays in tandem almost,” Granato said. “… They obviously have the skill and the chemistry is developing. That goal (Tuesday) is a nice a goal as we’ve seen all year.”

“We feel that if we can get those two in that role, they can hold power plays accountable by virtue of potential short-handed goals,” Granato said. “And that’s something I don’t think it’ll be at a compromise of killing because they’re both very intelligent players.”