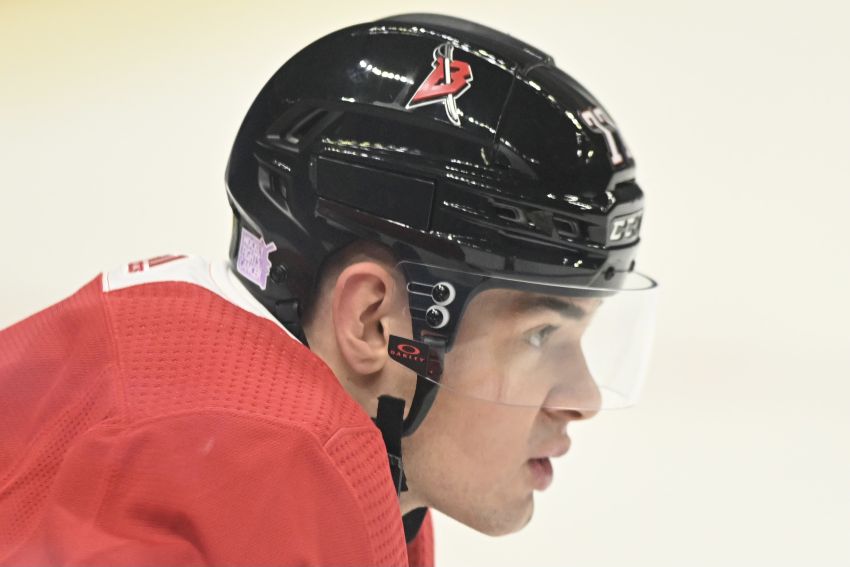 BUFFALO – JJ Peterka spotted imminent danger coming the Sabres’ way, so as the puck slid around the boards as they enjoyed a power play, he began hightailing it back toward his zone.

“I got on my horse,” the rookie winger said following Saturday’s practice.

Peterka’s instincts and speed allowed him to close in on Logan O’Connor at center ice, and he thwarted the Colorado Avalanche winger’s scoring attempt with the Sabres trailing by one goal late in Thursday’s 6-4 loss.

Still, the German’s defensive gem against the Avalanche – his ability to read, react and kill a play – illustrates his growth more than his offensive output.

“That’s an area that he’s getting better at, just recognizing play without the puck, recognizing potential danger the other way toward our net,” Sabres coach Don Granato said. “It’s still a work in progress, but very good sign the other night to see him recognize that and jump to get his job done.

“So we know his scoring is developing and it will develop, and that’s the other end of the game that I think will develop more rapidly now as he gains a little more experience and gets the hindsight of playing in the NHL.”

Peterka, who turns 21 on Jan. 14, arrived in North America last season a highly skilled, raw youngster. Not surprisingly, he produced offense, compiling 35 goals and 80 points in 80 total games with the Rochester Americans, including the postseason.

In his NHL debut Dec. 29, Granato said Peterka, a second-round pick in 2020, 34th overall, encountered a play similar to the one he stymied in Thursday’s game.

“He didn’t recognize it,” he said.

As last season progressed, however, Peterka evolved, earning more responsibility as he developed better habits. Early in the winter, for example, the Amerks awarded him penalty-killing duty.

Granato said the 6-foot, 189-pound Peterka “continues to grow both offensively and defensively every day.”

“There’s a lot of room for it, and I don’t say that with a negative tone,” he said. “It’s just we feel he can be pretty dominant in moments offensively and we think the same defensively with his power. His power and strength on pucks, his ability to get to spaces quick, his strength on his stick is really all impressive. And that bodes well defensively because lots of times when you break up a play defensively, if you get on offense right away, it’s a scoring chance the other way.”

Peterka showcased offense from the get-go this season, scoring his first NHL goal opening night and registering one point in each of the first four games. As of Saturday, his five goals and 13 points both ranked fourth among rookies.

His recent scoring surge has been buoyed in part by his linemates, Quinn and center Dylan Cozens.

Having played 144 NHL games, Cozens, who turns 22 on Feb. 9, is the most experienced and oldest member of perhaps the league’s youngest line. Peterka and Quinn, 21, have played a combined 47 big league contests.

Cozens’ ability to communicate what he learned in his first two seasons and set an example has been critical as the trio has established itself as the Sabres’ No. 2 line.

“They’re dialed in when Cozens talks to them,” Granato said of the neophytes. “Cozens helps us as coaches convey messages that we were conveying to Dylan a year ago, year and a half ago. That speeds their progress, too.”

The trio has been on a tear. Cozens has scored five goals and 10 points in the last seven games. Quinn, meanwhile, has recorded three goals and seven points during that stretch.

“I feel when you touch the puck, you know exactly where he is,” Peterka said of Quinn. “I mean, it’s only getting better and that’s the crazy thing, I would say, that we’re so young playing together and have (such) good chemistry already.”

Bryson said there’s “a good chance” he will play against the Sharks. He said he tweaked his groin “a little bit” on Nov. 23.

In other injury news, Granato said winger Vinnie Hinostroza, who has been nursing an undisclosed injury, left Saturday’s practice early and is day to day.