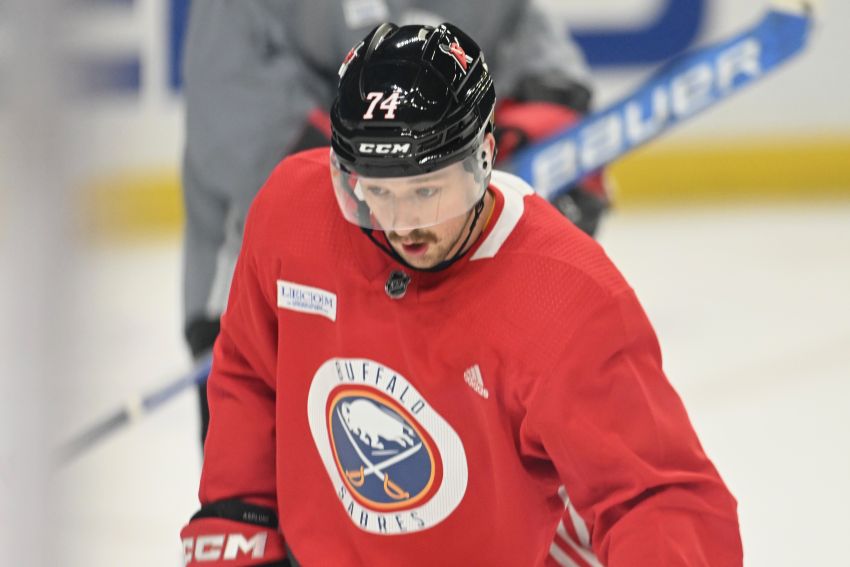 BUFFALO – Late last month, Rasmus Asplund began what he called a “reset.” The Sabres winger felt the details slipping in his game, and he struggled so badly he sat out five straight games as a healthy scratch.

“I just needed to reset everything, start on a new page and get back to my game,” Asplund said prior to Tuesday’s 6-0 win over the Los Angeles Kings at KeyBank Center.

That game, the Swede said, starts with defense. But he said he started to “chase” offense and points a bit. He got away from his bread and butter, and his ice time dropped more than five minutes some games before he fell out of the lineup.

“If I do the defensive stuff right, that’s when my offense comes,” said Asplund, who recorded two third-period assists Tuesday, giving him eight points in 20 games this season. “… I’m not the type of player that’s going to create a lot of offense by not doing my defensive stuff. So I just tried to reset and start focusing on that game. I think I had a really good step in the right direction in Pittsburgh on Saturday.”

In that 3-1 loss to the Penguins, Asplund’s first game since Nov. 28, he enjoyed perhaps his best outing in weeks, skating 10 minutes, 52 seconds, mostly beside center Tyson Jost and Victor Olofsson.

“He was real good … (and) his details were good,” Sabres coach Don Granato said.

Asplund’s ability to examine his game has become one of his strengths. He has often spoken frankly over the past few seasons about how he assesses his game and targets areas he can improve.

“This is making him better and he’s already streamlined his game to his skill set at this level within the context what we need as a team and he dialed in pretty good the other night,” Granato said.

He added: “There’s nothing that Aspy has gone through that should be alarming as far as adversity.”

The 5-foot-11, 185-pound Asplund, 25, said the struggles he endured on his way to the NHL helped prepare him for what he has gone through in the big leagues.

“I’ve said it many times about our group, it’s easy for me to back our guys as a coach because they look in the mirror, they take responsibility for their positions, good or bad,” he said. “And specifically when it’s not going well, they stand up and look within themselves for answers and don’t blame anybody else. And Aspy epitomizes that.”

“I talk to him closely and he gives me some feedback, too, on what he wants from me and what he needs to see from me,” he said. “That helps a lot when you feel that you have that support and you cannot relax a little bit, but you know you can just do what you have to do to get back to your game and you know that the coaches have your back. That’s the kind of coach Donny is.”

Defenseman Ilya Lyubushkin, out the last seven games recovering from a lower-body injury, has started skating on his own, according to the Sabres. They hope he can join practice soon.

Two lower-body injuries have limited Lyubushkin, 28, to 17 games this season.