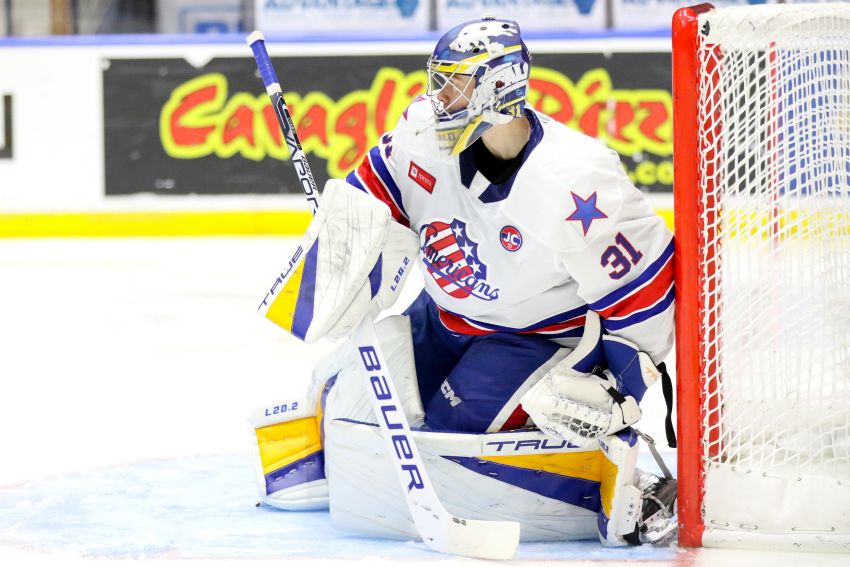 BUFFALO – When the Sabres convene for their pregame skate this morning, Eric Comrie will likely be one of three goalies on the ice as they prepare for the Philadelphia Flyers.

On Friday, Comrie made the third and likely final start of his conditioning assignment with the Rochester Americans, stopping 24 shots in a 3-2 home loss to the Lehigh Valley Phantoms.

He did not dress for Saturday’s 4-3 road win over the Syracuse Crunch.

The Sabres can keep Comrie, 27, in the AHL for up to 14 days – his stint began Dec. 31 – as he works his way back from a lower-body injury he suffered on Nov. 16. Still, if he responded well to the game action, they likely won’t keep him in the minors this week.

Update: Comrie is back with the Sabres.

Comrie compiled a 1-2-0 record with a 3.03 goals-against average and an .898 save percentage with the Amerks.

If the Sabres want to activate him, they must create a roster spot. In his absence, rookie Ukko-Pekka Luukkonen, 23, has emerged as the No. 1 goalie, winning his last six starts. Meanwhile, veteran Craig Anderson, 41, has remained one of the NHL’s best backups.

Comrie served as the Sabres’ starting netminder earlier this season, registering a 4-7-0 mark with a 3.62 goals-against average and an .887 save percentage in 11 games.

Saturday’s 6-5 overtime win against the Minnesota Wild at KeyBank Center kicked off a dizzying stretch of 13 games over the next 22 days for the Sabres. They were scheduled to practice Sunday, but they canceled it late Saturday night.

With games tonight, Tuesday and Thursday and a scheduled day off Wednesday, they won’t practice again until Friday.

The Sabres play games on Monday, Tuesday, Thursday and Saturday for the next three weeks.

“This is a tricky one,” Sabres coach Don Granato said of his team’s packed January. “We will absolutely practice less and be more concerned with where we can get rest in a very tight schedule for the next three weeks.”

On Saturday morning, for example, captain Kyle Okposo and winger Zemgus Girgensons, both of whom are nursing injuries, sat out the pregame skate for maintenance.

Granato said earlier this season, he told his team “we have a certain standard for practice, but … it’s all about games at this point and how are we going to put ourselves in the best position to be successful?”

The Sabres have practiced just three times since their Christmas break began on Dec. 23.

“We’ve had to prove to the fans that we’re a competitive team,” he said. “The fans … when they are loud, we just want to win more. We love our crowd. We love our fans.”

Williamsville native and ex-Sabres winger Justin Bailey on Saturday cleared waivers and was assigned by the Edmonton Oilers to the Bakersfield Condors, their AHL affiliate.

Bailey, 27, had to pass through waivers after signing a one-year, two-way contract. He has spent all season with Bakersfield on an AHL deal.

The Sabres on Saturday officially reassigned forward prospects Jiri Kulich and Isak Rosen from their respective national teams to Rochester following the World Junior Championship. Neither played in Saturday’s game.