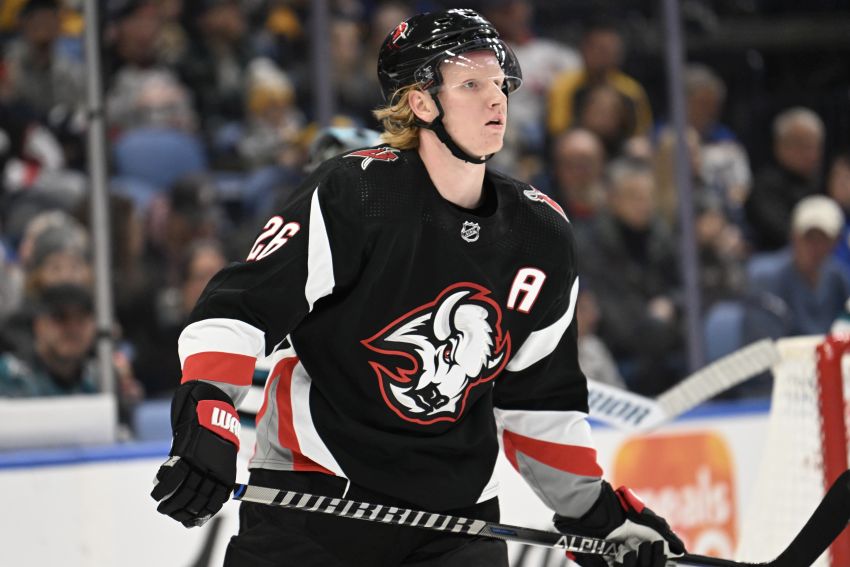 BUFFALO – By the end of one of the most brilliant performances by a Sabres defenseman in their 53-year history, Rasmus Dahlin was exhausted.

Dahlin, having surpassed a minute on the ice, desperately wanted to get to the bench for a breather late in Saturday’s frantic overtime against the Minnesota Wild.

“I was going to, but I have to play defense,” Dahlin said following his dynamic two-goal, five-point performance in the Sabres’ thrilling 6-5 win. “I had to take responsibility.”

At that moment, Sabres coach Don Granato said, Dahlin, 22, likely experienced “a shot of adrenaline.” So he stayed on the ice and defended.

“And then I had the puck, so I had to do something,” said Dahlin, who played a game-high 29 minutes, 22 seconds. “Good thing we had (Peyton Krebs) and (Victor Olofsson) on the ice.”

A weary Dahlin slowly moved the puck up the ice and left a drop pass for Krebs inside the Minnesota blue line. Krebs skated into the left circle and adroitly fed Olofsson at the top of the right circle. Olofsson unleashed a wicked one-timer, beating goalie Marc-Andre Fleury with 18.3 seconds left.

The goal, Olofsson’s second of the night following a seven-game drought, secured the Sabres’ eighth win in nine tries. Incredibly, in their last three victories, they’ve rallied from third-period deficits to triumph in overtime.

Dahlin, whose second goal tied the game with 2:24 left in regulation, finished his memorable outing by spending the final 1 minutes, 27 seconds on the ice.

“He was a force,” Granato said. “… That was a special night by him. To watch that unfold was impressive.”

Dahlin’s five points tied the franchise record for defensemen last accomplished by Hall of Famer Phil Housley, his first NHL coach, on Dec. 12, 1989 against the Quebec Nordiques. The Swede’s first assist on Saturday was his 200th point.

“He just keeps doing things he didn’t do yesterday,” said Sabres winger Casey Mittelstadt, who assisted on both of Dahlin’s goals. “In my opinion, pretty soon he’s going to run out of things. He’s so fun to watch, though, so fun to be out there.”

Dahlin dazzled on the tying goal, fending off a Wild player inside the blue line and creating room to give Mittelstadt the puck. Dahlin then stationed himself in the right circle near the board and one-timed Mittelstadt’s pass in.

“I just wanted to get the puck to the net,” Dahlin said. “I saw a couple guys around it and yeah, sometimes it trickles in, sometimes it don’t.”

In the second period, Dahlin put the Sabres up 3-2 by grabbing Mittelstadt’s pass above the left circle and maneuvering through the slot to give himself space before scoring.

The Sabres have become one of the NHL’s dominant offense teams. Believe it or not, they’re 5-0 in their black “Goathead” alternate jersey and have scored six goals in each contest. Overall, they’ve scored a league-high 148 goals in 37 games this season.

The Sabres, as their second consecutive sellout of 19,070 fans illustrates, are starting to become a hot ticket again following a season of record-low attendance. Saturday’s raucous crowd was perhaps the most engaged and loudest in years.

The crowd started making noise before the game, when the Sabres honored Bills safety Damar Hamlin, who suffered cardiac arrest and had to be resuscitated on the field on Monday in Cincinnati, with a moment of celebration.

“It’s incredible when you have a crowd like that tonight,” Granato said. “It is more than crowd – you could feel passion in the building, I think all of us could. Even again before the puck dropped, you could feel the passion. The nights like this are opportunities to make memories for hockey fans, for hockey people.”

After Sabres center Tage Thompson’s power-play goal tied the game at 2 in the second, his 31st overall this season, the crowd chanted “MVP, MVP.”

Players, Granato said, “loved it” and smiled on the bench.

“That’s engagement between the fans and our players, and they feel that and there’s nothing that makes them more proud to know that their work and what they’ve worked for and care about working for is seen and felt,” he said. “So that was a pretty neat moment.”

Olofsson opened the scoring in the first period before Brandon Duhaime and Kirill Kaprizov put the Wild up. After Dahlin, Thompson and center Dylan Cozens scored in a span of 3 minutes, 25 seconds in the second period, Ryan Hartman, Marcus Foligno and Joel Eriksson Ek scored to put the Wild up in the third.

Sabres goalie Ukko-Pekka Luukkonen made 39 saves, including a breakaway stop on Jonas Brodin late in overtime, in his sixth consecutive win.

2 thoughts on “Brilliant outing by Rasmus Dahlin leads Sabres past Wild in OT: ‘He was a force’”