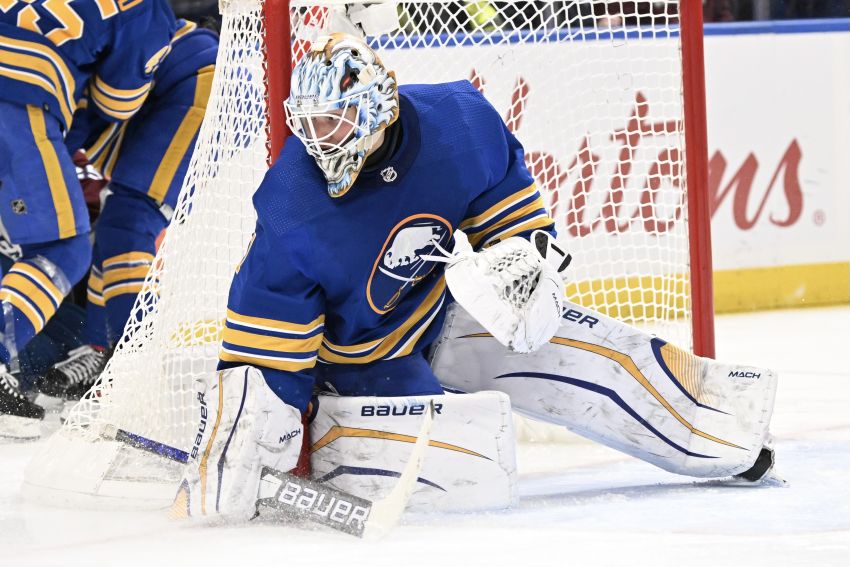 BUFFALO – Ukko-Pekka Luukkonen’s emergence as the Sabres’ No. 1 goalie has created a good problem the team will likely have to address in the coming days.

Luukkonen, having won five straight starts and seven of his last eight entering tonight’s home game against the Minnesota Wild, has possibly entrenched himself in the NHL. The Finn, 23, has developed into the Sabres’ backbone and one of their biggest difference-makers over the past month.

His splendid goaltending had helped them move to within six points of the Eastern Conference’s last wild card spot entering Friday’s games.

Can the Sabres really send Luukkonen back to the Rochester, where he started the season with the Americans, when goalie Eric Comrie’s conditioning stint ends?

Meanwhile, goalie Craig Anderson, 41, has embraced his new secondary role this season, quickly establishing himself as a premier backup while providing valuable veteran leadership. The league’s oldest player is still a vital asset.

Anderson has compiled terrific, team-best numbers – a 2.61 goals-against average and a .923 save percentage – in 14 outings.

Then there’s Comrie, who played 11 of the Sabres’ first 17 games before suffering a lower-body injury on Nov. 16. Comrie, 27, made his third and perhaps final start with the Amerks on Friday.

While the Sabres can keep him in the AHL until late next week, if he feels healthy, he could be summoned in a day or two.

Keeping healthy three goalies on the roster rarely works out well. One netminder doesn’t even get to dress for games. Practice time is limited.

Comrie, a No. 1 NHL netminder for the first time earlier this season, almost certainly wouldn’t clear waivers. Before signing a two-year, $3.6 million contract in free agency to join the Sabres, he was plucked off the wire four times.

To activate Comrie off injured reserve, the Sabres would have to make a roster move, perhaps waive an extra defenseman or forward.

The Sabres likely don’t want to whittle away their depth and trade one of their goalies. It’s possible when Anderson decided to return for his 20th NHL season that the Sabres told him he wouldn’t be dealt.

“Things change really fast in pro sports,” Granato said following Friday’s practice. “Today, if we had to make that (goaltending) decision and you could only keep two or only keep one, it’s a tougher decision, obviously. We’re not at that point today.”

Right now, starting with tonight’s game at KeyBank Center, the net might belong to the 6-foot-5, 217-pound Luukkonen. As long as he keeps playing well, Buffalo could keep utilizing him.

“You have to re-earn everything,” Granato said. “You don’t earn something and it’s banked. You have to go out and earn it again. Every single day it’s 0-0 when you start the game. When guys play well, they have to just keep playing better and better. Upie has done that now consistently, which is really good. We look at things and we’re very happy with Upie’s progress. But we’re not content and I don’t think he’s content, either. …

“We continue to watch that and evaluate that but we don’t want to get too far ahead of ourselves, too.”

Since Dec. 15, Luukkonen, has registered a 5-0-0 mark with a 2.75 goals-against average and a .925 save percentage. At times during the Sabres’ torrid run, the rookie has made critical saves late in tight games.

“I always talk about as a goalie the best thing you can do is get the feeling that you’re helping the team to win,” Luukkonen said. “I think, lately, I’ve been doing that. I hope and I feel like the team feels the same way. So that kind of helps you to get the feeling that you belong here, and you actually are a part of the team. You’re kind of helping the team to win. That feeling is getting stronger kind of game by game.”

Granato said Luukkonen’s recent success illustrates he has targeted “the right areas to improve because his results keep getting better and better.”

Overall, Luukkonen has compiled an 8-3-1 mark with a 3.39 goals-against average and an .894 save percentage. In his first outings following his recall in mid-November, he sometimes looked a little wonky.

But he has evolved over the past seven weeks, adapting to the NHL style and learning how to read the world’s best shooters. Remember, prior to his current stint, he had played just 12 NHL games.

“When you get called up, that’s kind of what takes the longest, just like kind of figure out how you have to play here because, obviously, it’s different,” Luukkonen said. “The game is different, the shooters are different.”

Naturally, Luukkonen said he has gained more confidence and trust in himself.

“You trust that you’re making the right read and you’re reading the play better,” he said. “You’re not completely locked into shooters. You kind of play more free and (there’s) more flow to your game when you’re confident, that you’re feeling good about your game.

“Players like to say gripping your stick too hard, but I feel like the same goes to the goalies, too. I feel like that’s been one of the biggest things, just kind of playing more confident and be a bigger presence in the net.”