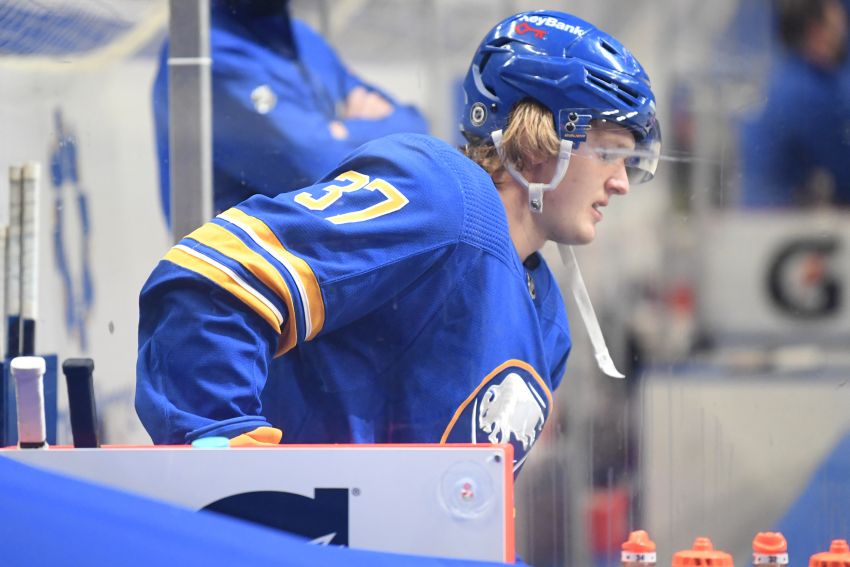 BUFFALO – After a six-week absence, center Casey Mittelstadt joined his teammates Wednesday morning, donning a gold non-contact jersey and skating with the Sabres as they prepared for their game against the Boston Bruins.

Now, when will Mittelstadt, who suffered an upper-body injury opening night, be able to play again? Wednesday’s game was the 18th straight he has missed.

The Sabres also play Friday, Saturday and Monday. Practice time is limited. They’re scheduled to have today off.

“We’re gonna read it day by day to see how he feels but he does need to go through at least a couple practices, I would say, with some good contact before we feel comfortable even assessing where he’s at,” Granato said following the morning skate inside KeyBank Center. “But certainly a positive sign that he’s on the ice with us.”

After scoring nine goals and 17 points over the final 22 games last season, he enjoyed a terrific training camp and appeared ready to seize his career-changing opportunities.

Then Mittelstadt was injured in the Sabres’ 5-1 win over the Montreal Canadiens on Oct. 14.

“He was one of those guys who didn’t want to leave here at the end of last year and trained extremely hard, he gets hurt (nine) minutes into Game 1,” Granato said. “So very excited to have him back. I think everybody collectively in that locker room when I mentioned he was going to join us in practice today, guys were energized and I know he is.”

The Sabres’ recent struggles – they were 2-8-1 in their last 11 games entering Wednesday – have made sitting out and watching games more difficult.

When Mittelstadt was injured, the Sabres said he would be sidelined at least two weeks.

The Sabres made one lineup change up front against the Bruins, inserting Arttu Ruotsalainen for winger Drake Caggiula. Ruotsalainen skated at left wing beside center Zemgus Girgensons and John Hayden.

The Sabres also scratched defensemen Will Butcher and Christian Wolanin (both healthy). Wolanin skated in the pregame warm-up.