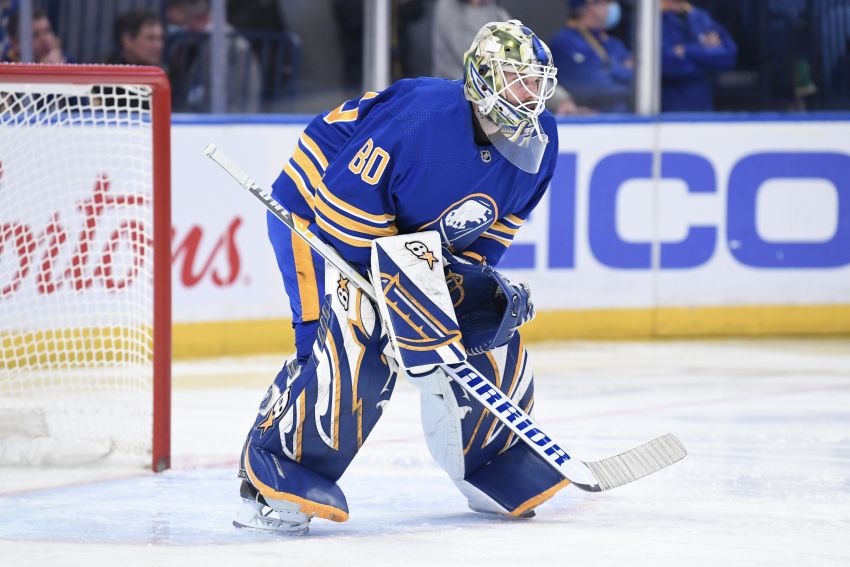 BUFFALO – In his last two starts, Sabres goalie Dustin Tokarski has compiled an 8.66 goals-against average and a .743 save percentage in just under 61 minutes.

Sabres coach Don Granato, of course, yanked him from both games.

In the first outing, Thursday’s 5-0 loss to the Calgary Flames, Tokarski received little help, often getting abandoned by his teammates. But in Monday’s 7-4 loss to the Columbus Blue Jackets, Tokarski wasn’t his normal self, allowing a few weak goals.

So tonight against the Boston Bruins, Granato will give Tokarski, who has mostly subbed splendidly for injured No. 1 goalie Craig Anderson, a breather. Aaron Dell will start for the second time in three games.

“Unfortunately for Ticker, he’s been pulled in his last two starts and his confidence didn’t look great, he didn’t look like himself the other night,” Granato said on a Zoom call this morning. “We obviously want him to be himself. We want him to be fearless, as we’ve said. And Dell has been in a bit of a groove. He started a week and a half ago … and he’s progressed, he’s been better.

“So he’s the hotter guy right now and we based the decision on that. We hope that it gives Ticker a chance to sit back and breathe and get back to form, which we know he will. It’s just a matter of how quick.”

Dell has compiled a 0-3-0 record and a 3.72 goals-against average and an .874 save percentage in four games this season. He stopped 14 of the 15 shots he faced in relief of Tokarski on Monday.