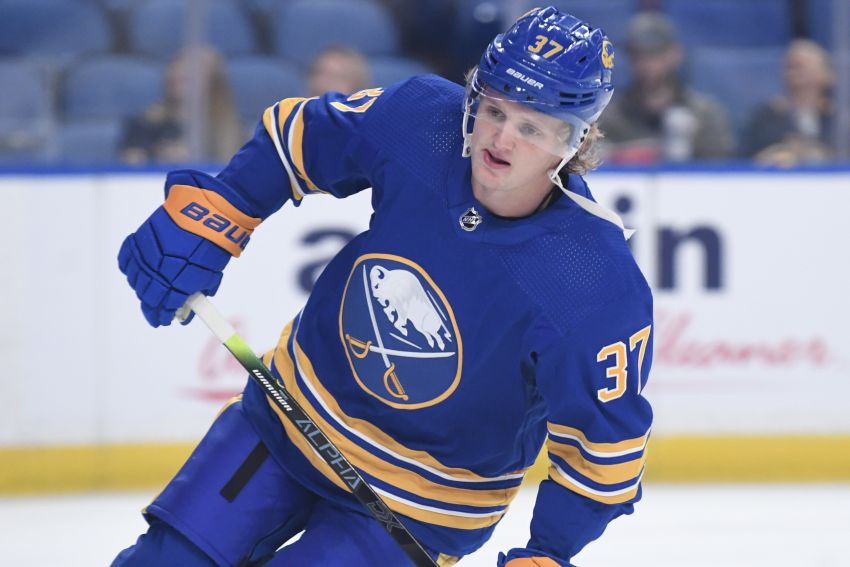 Mittelstadt suffered an upper-body injury when Brendan Gallagher hectored him after he intercepted a pass halfway through Thursday’s game. After going to the dressing room, Mittelstadt briefly returned to the bench before leaving the contest.

Granato said Jokiharju suffered a lower-body injury in the first period but played through it and finished the game.

“It’s not short-term,” Granato said Friday of the injuries. “And our doctors will be evaluating that. There’s still thought it could be right around that range. There’s thought that it could go a little bit longer than that. So it’s too early to tell on both those injuries.”

With Mittelstadt out, center Dylan Cozens moved up and practiced between Jeff Skinner and Vinnie Hinostroza on Friday inside KeyBank Center.

Of course, Granato, whose Sabres host the Arizona Coyotes this afternoon, is excited to give Ruotsalainen and Butcher opportunities. Still, he knows the Sabres lost key players.

“Mittsy, his play has been incredible,” he said. “So, yes, they’re big losses. Joki has been paired with Dahls and Mittsy was in essence our No. 1 center. So I’m bummed for those two guys because they came into the season prepared and in shape and they had a good training camp.”

In other injury news, Granato said defenseman Mattias Samuelsson, out since blocking a shot in a rookie camp game, has skated three times on his own.

“First two, he couldn’t put a lot pressure there,” he said. “He had a much better day. It’s looking good, positive. And what that means, I don’t know when he’ll join practice. I would guess he’s getting close to joining practice. Within a week, and then it could be real fast from there.”

Poturalski, 27, is beginning is seventh pro season. The forward e re-signed with the Carolina Hurricanes during the summer after leading the AHL in scoring last season with the San Diego Gulls.

The Rochester Americans on Friday signed forward Mark Jankowski, a veteran of 253 NHL games, to a one-year AHL contract.

The 6-foot-4, 212-pound Jankowski, 27, has scored 40 goals and 75 points in 253 career NHL outings over the past five years with Calgary Flames and Pittsburgh Penguins.

Jankowski spent all of last season with the Penguins, compiling four goals and 11 points in 45 contests.

The Flames drafted Jankowski in the first round in 2012, 21st overall.

play prior to Mittelstadt going to the dressing room #LetsGoBuffalo #GoHabsGo pic.twitter.com/Y01CYhhm1D