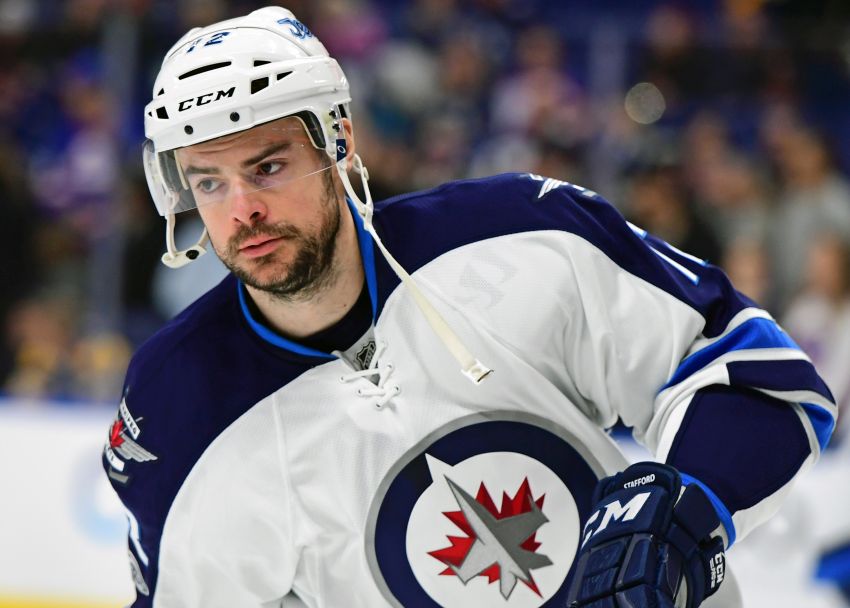 At first, Stafford thought the thump from Ottawa’s Michael Blunden had only hurt his shoulder.

“I also didn’t realize it at the time – I felt like I was OK – but I had some concussion symptoms early on then, because I hit my head and my shoulder into the boards,” Stafford told the Times Herald.

Things quickly worsened for Stafford, who’s in his third season in Winnipeg after nine years with the Sabres.

“First game of the season, I got smacked in the mouth with a stick, I lost three of my bottom teeth, and that’s No. 2,” he said. “And then a week later, I got elbowed in the back of the head, so that’s No. 3.”

Stafford, 31, said he endured some “minor” concussions earlier in his career.

“But this one was the first time where I was really feeling a lot of the symptoms – the mood swings, the fatigue, the disconnect,” he said. “It’s pretty scary, scary stuff. You got to make sure you take care the brain.”

Stafford left the lineup Oct. 25 and returned Nov. 20, missing 15 games. At one point, he said he went home to his wife, Hali, and son, Mason, in Minnesota to “brood.” That trip helped his recovery.

“Take enough time to make sure the brain’s OK, because you only have one,” he said. “It’s definitely scary stuff.”

He added: “The most important thing to me is you don’t want to mess around with a concussion.”

Stafford said he feels normal again. He scored a power-play goal in Saturday’s 4-3 loss to the Sabres. Slowly, he said, his timing is coming back. But not surprisingly, his play has suffered. The 2004 first-round pick has mustered only three goals and seven points in 27 games.

“I was kind of behind the eight ball from the beginning there,” said Stafford, who scored 21 times last season, his fourth 20-goal campaign.

Stafford has been skating short minutes on the fourth line. In five of the last seven games, he has played less than 10 minutes.

“It’s been kind of tough once you’re back and figuring out, it’s been frustrating,” he said.

While Stafford was traded Feb. 11, 2015, he played with only nine Sabres in Saturday’s lineup. He has one new connection to the team, however. New assistant coach Tom Ward coached Stafford at Shattuck St. Mary’s, a high school in Minnesota famous for producing NHL talent.

Stafford’s father, Gord, a former pro player, took over for Ward at Shattuck.

Other than switching goalies, the Sabres made one lineup change, inserting defenseman Justin Falk, who sat out Thursday’s 4-3 overtime loss in Chicago, for Josh Gorges, a late scratch because of a lingering hip pointer.

“With a 1 o’clock game, coming to the rink it wasn’t 100 percent, it wasn’t where it needed to be and actually killed him to not be going out there,” Bylsma said.

The Sabres sent prospect Alexander Nylander, 18, back to the AHL Rochester Americans on Saturday following the World Junior Championship.