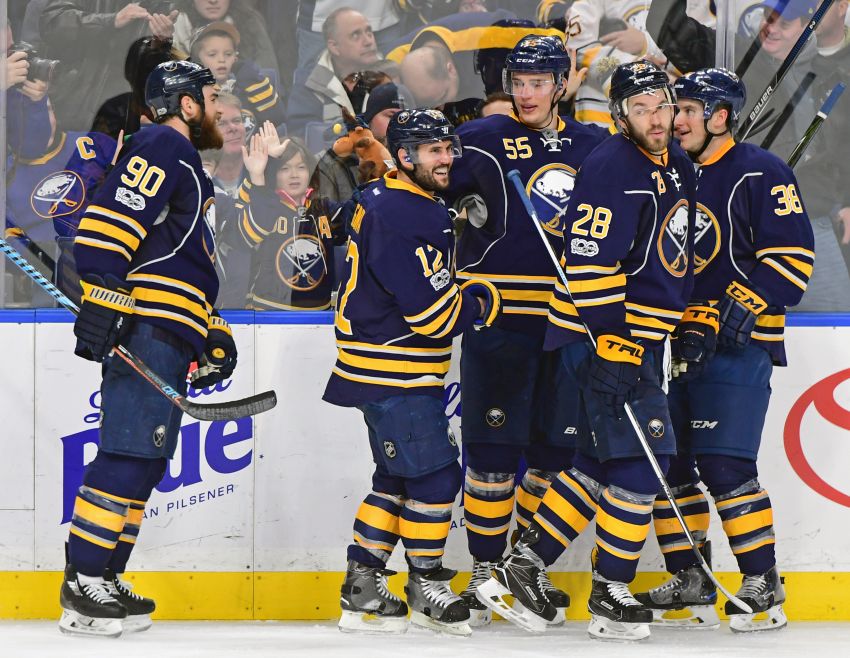 BUFFALO – If the last-place Sabres go on a three-month tear, roar up the standings and do the unthinkable – that’s secure a playoff spot – remember their offensive outburst late in Saturday afternoon’s thrilling 4-3 come-from-behind win.

Down 3-1 against the Winnipeg Jets and trudging toward their eighth loss in 10 games, the Sabres suddenly exploded for three goals in just 4:42, sending the capacity crowd of 19,070 fans into a frenzy.

The wild third, which also featured a booming hit from Jake McCabe on Jets star Patrik Laine and two melees, ranks as one of the most entertaining periods inside the KeyBank Center in recent years.

“We played a hell of a third period,” Sabres goalie Robin Lehner said. “We all stood up for each other, some big hits, some good plays.”

The victory, just the Sabres’ 15th in 39 tries, felt like it could be a turning point in what has recently seemed like another lost season.

“It has the feel of a turnaround game,” Sabres coach Dan Bylsma said. “We needed that in the game … It feels like a big game for us.”

So what happened? How did the Sabres, who needed almost 12 minutes to register their first shot of the second period, tilt the game so quickly?

Marcus Foligno scored on a breakaway 5:12 into the third period, Zemgus Girgensons followed at 5:38 and Brian Gionta put the Sabres up at 9:54.

But the genesis of their comeback might’ve come during a TV timeout late in the second period, when Bylsma, normally a cool customer, lit into his team.

“Angry, we could call it that,” Foligno said of the outburst. “I think he was just trying to wake us up. I think we were a little bit foggy. I think we were turning pucks over. There was something that needed to be said, he said it. The team responded really well.”

The Sabres generated some late momentum, then got a critical goal after Cody Franson fed Foligno.

“We eventually needed to get a goal to get back in it,” Bylsma said. “It was a great quick up by Franson to get Foligno in for the breakaway and then we just kept riding the momentum from there.”

That momentum created some emotion. Girgensons yelled after he tapped Matt Moulson’s rebound in. Gionta celebrated with a fan through the glass after he held the puck, drew Connor Hellebuyck down and beat the sprawling Jets goalie.

“What a move by him,” Foligno said. “That was incredible.”

So was McCabe’s wicked but clean hit on Laine 5:48 into the third period.

As Laine, who already has 21 goals, tried to grab a pass in the neutral zone, the defenseman stepped up and flattened the rookie, whose head hit the ice.

While Laine lay motionless on the ice, possibly out cold, the Jets swarmed McCabe. Somehow, only Winnipeg’s Mark Scheifele received a penalty, a roughing call, from the scrum.

The Jets had no update on Laine, the second overall pick in 2016.

The hit might’ve been the most memorable – and hardest – by a Sabre since Brian Campbell’s memorable annihilation of Philadelphia’s R.J. Umberger in the 2006 playoffs.

“That was a big collision,” Bylsma said.

Clearly, the Sabres fed off the hit.

The Sabres, who also erased a late two-goal deficit and beat Los Angeles 6-3 on Dec. 16, have scored 32 of their 88 goals in the third period.

Byfuglien knocked Lehner’s mask off, but a bout for the ages never materialized.

“They came in and they started (crap), so you got to stick up for each other,” Lehner said. “Too bad the refs came in between.”

Since the Jets had pulled Hellebuyck, Bylsma had no problem with Lehner joining the fray.

“He was one of our six on the ice,” Bylsma said. “They had six on and the buzzer had gone, so I thought that was a good time for him to get in there.”