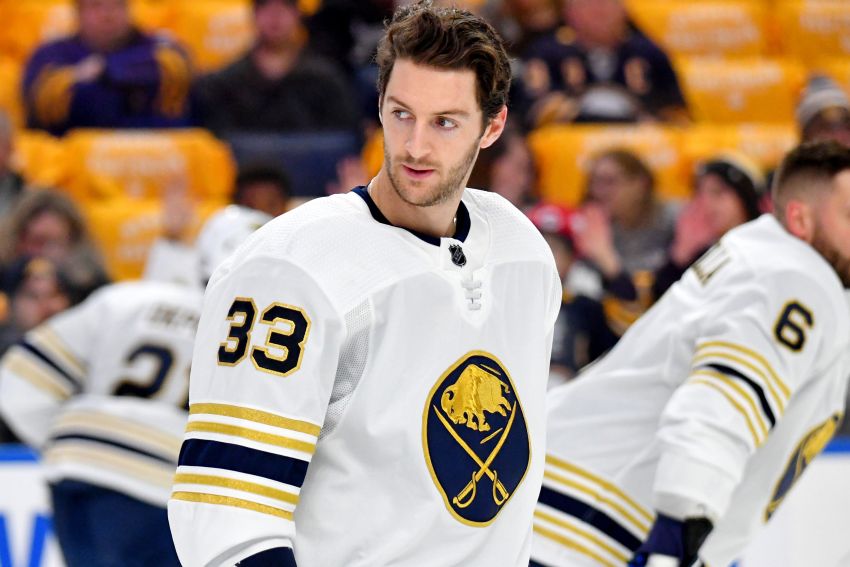 Colin Miller has been a healthy scratch 14 times. ©2020, Micheline Veluvolu

BUFFALO – In Vegas, Colin Miller spent two seasons as one of the Golden Knights’ top defensemen, eating up minutes and piling up points.

But Miller, who will return tonight against his old team after sitting out two straight games, hasn’t secured a regular spot with the Sabres. Their biggest offseason acquisition – they traded Vegas two draft picks – has been a healthy scratch 14 times.

When Miller has played, he has often skated short minutes as the seventh defenseman.

In 32 appearances, Miller has struggled to adjust. He’s still trying to carve out a role more than halfway through the season.

“I’m probably still trying to find it here because it’s been kind of in and out and some different players but I think a lot of guys can say that,” Miller said this morning inside KeyBank Center. “On the back end, Zach (Bogosian) and myself have been in and out a lot.”

The Sabres have carried eight defenders most of the season, giving Sabres coach Ralph Krueger options to yank Miller and others.

Incredibly, Miller has been scratched more than any defenseman left on the roster.

Krueger said Miller must “adapt to what we want to see.”

“He has an ability to add an offensive punch, which we believe is still going to evolve here with us,” Krueger said. “I’ve always told you you lose a little of your offense as you get used to the defensive concepts of a group and trying to find your way within that system, and that’s been his situation.

“I’m sure his offense will bloom as he continues to learn to be that player we need without the puck, and he’s working hard at it. We love having him on the team.”

So far, Miller hasn’t added much offense, mustering only one goal and five points.

“Probably get some points would help,” Miller said of what he can do to stay in the lineup. “I think we’ve had some trouble scoring so that always helps but we’ve got eight defensemen.

“It’s been a bit of a rotation sometimes, some guys they definitely want to see in there, get some development.”

With Miller back tonight, the Sabres will likely sit Bogosian.

Krueger said the Sabres will dress 12 forwards and seven defensemen for the pregame warm-up. Based on who left the ice late this morning, wingers Rasmus Asplund and Scott Wilson and defenseman Lawrence Pilut could also be scratched.

Winger Jimmy Vesey will likely return tonight after sitting out as a health scratch Sunday.

Linus Ullmark will start in goal.