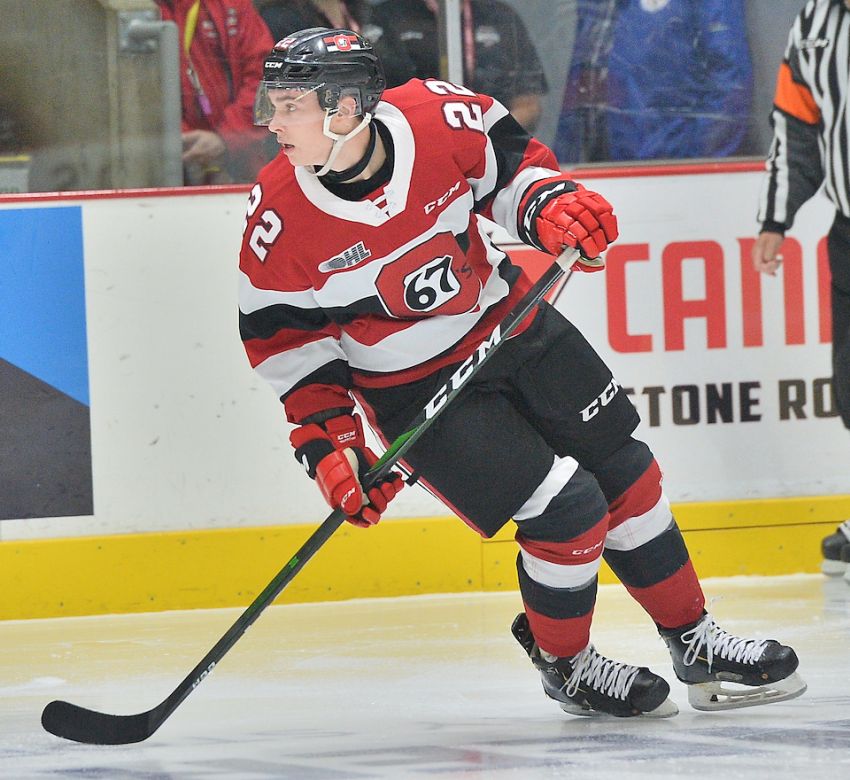 Growing up, Jack Quinn liked to think of himself as a multi-sport athlete. The high-scoring winger the Buffalo Sabres drafted eighth overall Tuesday did not simply focus on hockey. He also enjoyed playing baseball and golf.

Not surprisingly, Quinn struggled to make any progress in hockey. He got cut from AAA teams and was forced to play AA.

Just a few years ago, he looked nothing like an NHL prospect.

Then Quinn started to commit himself to hockey. He focused on improving his skating, and his career began to change.

The 67’s drafted him. Suddenly, he had a future in hockey.

“The three years from there my game got continuously better,” an excited Quinn said on a Zoom call sporting a new Sabres hat shortly after they drafted him.

Suddenly, Quinn was a coveted prospect. What happened? How did he score 40 more goals than his rookie season?

“It’s hard to say one thing,” Quinn said. “I think there was a lot of factors that went into it. I had a great offseason training-wise, a great skill coach. I think those things translated throughout the year.”

Quinn also started playing a tougher brand of hockey. He said his coach, André Tourigny, challenged him to get inside and utilize his competitiveness and 6-foot, 167-pound frame. His mindset switched.

“I’m an offensive player, shoot-first guy,” Quinn said. “I like to score goals, but I also think I’m just an offensive driver. I like to hold onto the puck, make plays with the puck, make my linemates better. But I can also be good defensively and kill penalties, and I think I like to compete all over the ice.”

Sabres general manager Kevyn Adams, who’s running his first draft, can appreciate Quinn’s path. Adams carved out a 10-year NHL career as a checker by doing the little things well. He said he dug in with his scouts to learn more about Quinn.

“We see the ability for him to keep getting better,” Adams said. “His athleticism is high. Just a lot of metrics that we look at when we’re scouting were met and some. So this was just a player that the more work we did, the more excited we got.”

Quinn improved last season thanks, in part, to the dynamic combination he formed with center Marco Rossi. The prospects became perhaps junior hockey’s most lethal duo.

The Minnesota Wild drafted Rossi, who compiled 89 assists and 120 points last season, one spot after Quinn.

Quinn said he and Rossi “both made each other throughout the year.”

“I don’t think I would be the same player if I didn’t get to play the last two years with him,” he said. “He pushed me every day. I learned from him every day.”

Quinn has learned a lot over the past seven months. Instead of continuing a dynamic season for the powerhouse 67’s – he ranked second in the OHL in goals – the COVID-19 pandemic forced him focus on his training and remain patient.

He couldn’t attend the NHL Scouting Combine and had to meet with NHL teams via Zoom sessions online.

“It’s been a lot, I think would be the right word to describe it,” said of the experiencing the pre-draft process during a pandemic.

He added: “A lot of offseason training for the last six months not knowing what team I was going to end up. So there was a lot of unknowns.”

Quinn talked to the Sabres before the draft. Still, he said he wasn’t expecting to be chosen by them.

“I knew that my meetings went well with Buffalo, I had some great talks,” he said. “But at the same time, I had no expectations, or I had no idea where I was going to go.”

The Sabres, of course, need help up front, especially at wing. At center, they have star Jack Eichel and the recently acquired Eric Staal. They also expect Dylan Cozens, the seventh overall pick last year, to compete for a roster spot.

But Adams said the Sabres did not feel they needed a winger.

“I felt like we were looking for what we felt was the best player projecting moving forward,” he said. “I do think Jack has some center tendencies, too. It wouldn’t surprise me if you see him play center next year if he’s in junior.”

If Quinn is in Buffalo next season, he can learn from one of the best up close. Eichel, he said, is one of his favorite players to watch.

“I love the way he does things on the ice,” he said. “I watch a lot of YouTube about him and stuff just to try to pick up some things. So I love him as a player. It’s obviously really exciting to hopefully be future teammates with him down the road and I guess short-term, get on the ice with him.”