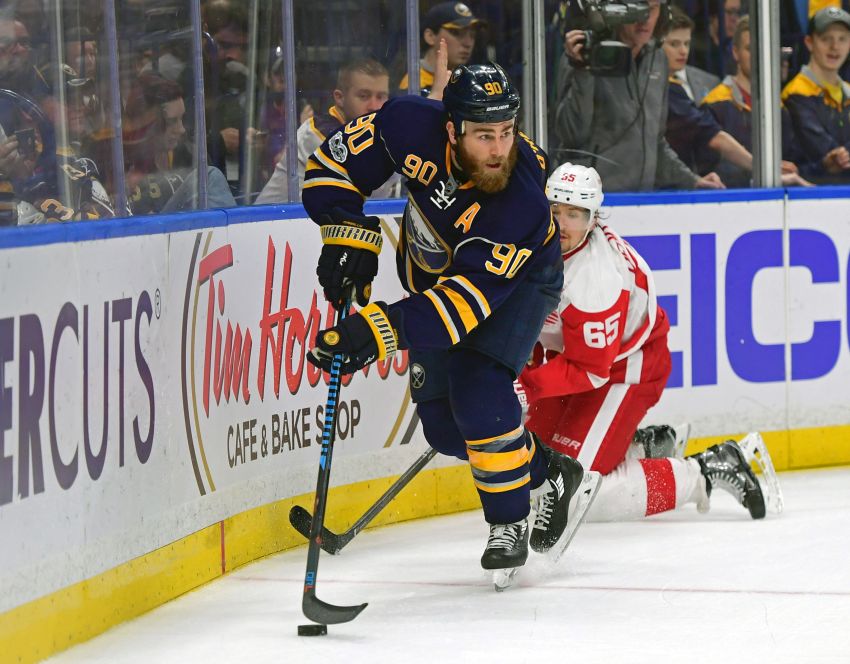 BUFFALO – With just over four minutes left in regulation Friday and the Sabres trailing 2-1, Ryan O’Reilly zoomed down the right wall hellbent on grabbing the puck from Danny DeKeyser deep in the Detroit zone.

O’Reilly eventually twisted DeKeyser around, grabbed the puck and skated behind the net, where he zeroed in on linemate Kyle Okposo in front.

But the rest of the Red Wings hadn’t caught up, so a surprised O’Reilly skated out front and backhanded a puck high past Detroit goalie Petr Mrazek to tie the game at 15:51.

“He willed it,” coach Dan Bylsma said following the Sabres’ 3-2 overtime win. “It was a big time play from our guy wanting to be a leader on this team. … He willed that goal in the back of the net.”

That set the stage for more exploits before the 18,942 fans in overtime.

After O’Reilly broke his stick and the Sabres killed off an early Okposo hooking call, Frans Nielsen was whistled for hooking. On the ensuing power play, O’Reilly fed Okposo from the right circle in front, and his linemate backhanded a puck in for the winner at 4:34.

The Sabres, a terrible home team for years, have now won four straight games at KeyBank Center. They can thank O’Reilly, an NHL All-Star last season, for Friday’s triumph.

“He can change the game like that with his smarts, his skill,” Okposo said. “You saw him do that. We need to win this game. He came up with a big play.”

Few players put more pressure on themselves than O’Reilly, who always seems to be lamenting his missed opportunities and demanding more of himself, even in good times.

O’Reilly said he was “frustrated all game.”

“If we want to get back and get in the playoffs, which is possible, it’s going to be tough, but it’s got to start with myself first,” said O’Reilly, who had one assist in the previous four games.

In moving past the New York Islanders out of the Eastern Conference basement, the Sabres showcased some progress.

The Sabres responded well to adversity, coming back from two deficits – O’Reilly scored after Darren Helm put Detroit up at 13:38 – and filling the huge void left by defenseman Jake McCabe’s injury.

“It was good for us we showed good maturity,” O’Reilly said. “We were doing some things well, but it was kind of back and forth all night. We stuck with it. We didn’t panic. We get scored on there late, you didn’t see us get down.”

McCabe, a first-pair defender beside Rasmus Ristolainen, injured his right shoulder 56 seconds into the game when Gustav Nyquist hit him.

Bylsma said McCabe, who has had a similar injury before, will be examined today. Expect a recall, although Bylsma said it won’t be top defense prospect Brenda Guhle, 19, who was summoned from junior last month for three games.

Bylsma didn’t have an update on McCabe on Saturday. He told reporters in Montreal McCabe has been dealing with the shoulder injury for two years and Nyquist’s hit aggravated it.

McCabe returned to the game for one shift and left again.

The Sabres have five right-shot defensemen and one lefty, Justin Falk.

With McCabe out, Ristolainen played a career-high 35 minutes, 24 seconds, including all of overtime. No NHL defenseman had played that much since Ottawa’s Erik Karlsson skated 36 minutes, 34 seconds on Dec. 20, 2015.

“We called the timeout with a minute left in overtime and … Risto had a big smile on his face and said, ‘I’m good to go,’” Bylsma said. “He had no issue playing all those minutes.”

Nielsen opened the scoring on the power play before Sam Reinhart tied it on the man advantage 5:06 into the second period. An official quickly disallowed the goal, ruling it was kicked it. But replays showed it wasn’t.

Sabres goalie Anders Nilsson, who was sidelined by the flu Thursday, made 32 saves, improving to 6-1-1 at home. The Sabres sent goalie Linus Ullmark back to the AHL before the game.

The Sabres begin a four-game road trip tonight against the Montreal Canadiens. With the NHL All-Star break hitting next week, the Sabres don’t play another home game until Feb. 2.