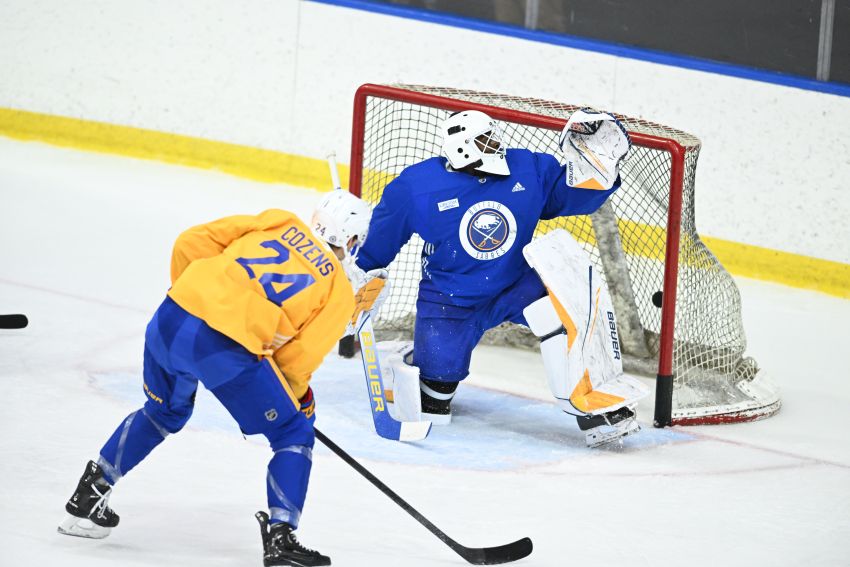 Adams told Cozens, 21, that he shouldn’t travel to Finland to simply play more hockey – he wanted him to set a goal for the tournament.

Cozens, having slumped at the end of his second NHL season, tallying just once in his final 29 games, told Adams he wanted to score goals.

“He said, ‘I know I can score goals in the National Hockey League. I’m getting chances. I want to go over there and find my scoring touch,’” Adams said Thursday prior to the first sessions of training camp at KeyBank Center.

Cozens regained his scoring touch in a hurry overseas, registering seven goals and 13 points in 10 outings as Canada earned the silver medal.

The Yukon native said he possessed a shooting mindset while often skating at left wing for the first time. He also tried to trust his abilities and stop overthinking.

“I just wanted to go there and find the back of the net after kind of a slump at end of last season,” Cozens said following Saturday’s scrimmage at LECOM Harborcenter. “I needed to go get a confidence boost going into this year.”

The two weeks the 6-foot-3, 195-pound Cozens spent starring for Canada could be a turning point in his career.

He said views himself “as a very well-rounded player and a guy who can play both sides of the ice.” He must, however, start scoring more goals.

“All it takes (is) for those to start going in and I think I’ll have a big jump,” said Cozens, who recorded 13 goals and 38 points in 79 games last season.

“I’m going to chirp Subby about that one, for sure,” Cozens joked.

Despite struggling to score late last season, Cozens, the seventh overall pick in 2019, kept generating chances. Over that frigid 29-game stretch, he pumped 59 shots on goal. His shooting percentage was just 1.7 percent.

As he endured an 11-game goal drought to close the season, he tied his career high by registering seven shots on April 23.

“It was, obviously, frustrating that they weren’t going in, but you got to look at the positives, and I’m getting the chances,” Cozens said. “All it takes is get hot for a stretch of those games there and I have a lot more goals that year. So that’s the biggest thing to look at is just the chances and opportunities.”

While he has played only 120 NHL games, he has more experience than most of the forwards in camp.

“It is weird now, like having guys here that are a few years younger than me,” Cozens said. “I feel like I just got started here, I’m already going into my third season. So it’s kind of weird as being seen as a vet. That’s just how it is, I guess. I’m just happy to be seen as that.”

Cozens, of course, has emerged as one of the Sabres’ core assets and often showcased leadership qualities.

If they keep improving this season, Cozens will likely play a prominent role.

“There’s a lot of guys that have stepped up,” he said. “We have a great leadership group to kind of follow in that way so it makes it easy for us to just kind of follow their path and see what they do and do what they do. We’re all just trying to create that culture and that camaraderie that builds winning teams.”

The Sabres open their six-game preseason this afternoon on the road against the Washington Capitals.