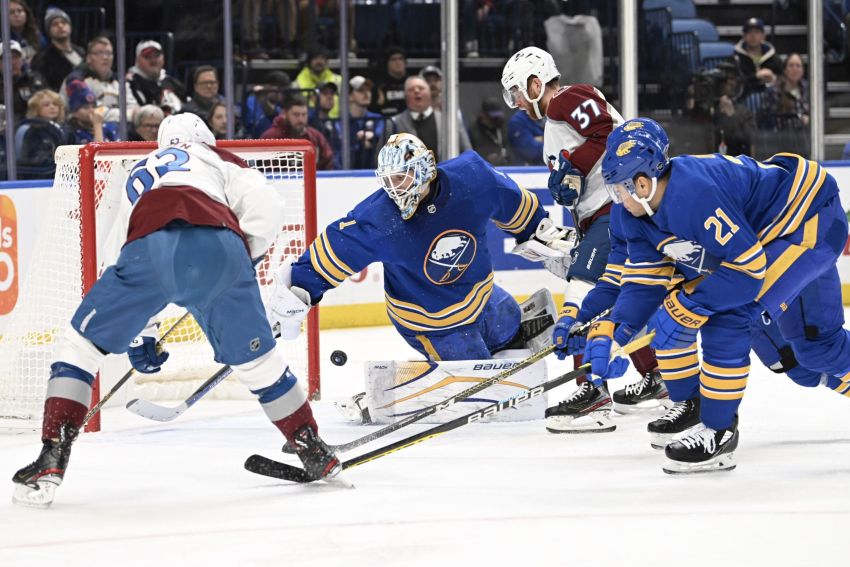 BUFFALO – The Sabres’ penalty killing has alternated this week between abysmal and excellent, helping them lose two games and win another.

In Thursday’s 6-4 loss to the Colorado Avalanche at KeyBank Center, it was awful, allowing three goals in six attempts to the NHL’s top power play, including two in a span of 49 seconds in the second period.

A night earlier in their 5-4 shootout win in Detroit, the Sabres killed all seven of the Red Wings’ power plays, including three in the waning minutes of regulation. In reality, the Sabres were lucky to escape with a victory after blowing a three-goal, third period lead.

In Monday’s 6-5 overtime loss to the Tampa Bay Lightning, the Sabres allowed three-power play goals in four attempts, including the late tying score.

There’s a simple solution to the Sabres’ recent woes: take fewer penalties. Right now, their inability to stay out of the box is killing them. If they had remained more disciplined, they might’ve swept a string of heavyweight opponents.

“We limited them five-on-five and then some stick penalties, some bad penalties,” Sabres defenseman Mattias Samuelsson said. “I’m part of the problem, I took one against Tampa, two last night. We’re just letting them get back in the game, giving them momentum and it’s got to stop.

“But I thought five-on-five the last couple games we’ve been really good actually. We brought it to the other teams and then get ourselves in trouble with the penalties.”

Against the Avalanche, the reigning Stanley Cup champion, the Sabres fell behind after taking an early penalty and lost the lead for good in the second period following back-to-back infractions.

Rookie winger JJ Peterka tied it before Thompson’s power-play goal 19:49 into the first period put the Sabres up 2-1.

But rookie defenseman Owen Power was whistled for a hooking penalty 7:50 into the second period, five seconds after partner Henri Jokiharju went off for hooking. Nathan MacKinnon tied the game at 9:00 before Artturi Lehkonen put Colorado up for good 49 seconds later.

MacKinnon scored again later in the second period before Sabres center Dylan Cozens narrowed it to 4-3. Compher restored the two-goal lead before the period ended.

“One full period, 27 minutes of special teams is way too much, really for any game,” Granato said. “Guys that are on special teams play more. Guys that aren’t sit there. There’s no rhythm in the game, especially in a back-to-back situation for us. That makes it a lot more challenging.”

“He was really good in the third period, which was nice to see because I’m sure he wished he had another opportunity on another one or two of those in the second,” Granato said. “And not to say he’s at fault. He probably could’ve had them knowing him as an athlete. But for the third, to rebound and bounce back and keep that game tight was a real good sign.”

MacKinnon had five points. Cozens, meanwhile, had a three-point night, giving him five goals and 10 points in the last seven contests.

“He fights, he battles, he scraps,” he said. “We all see that, and that’s the difference in him. He’s in situations where he’s in power-play situations, he scored short-handed last night, he’s getting key ice time because of his growth, which helps, and he’s just maturing. He’s a much more mature player than he was at the end of last year. So I think all of that.”