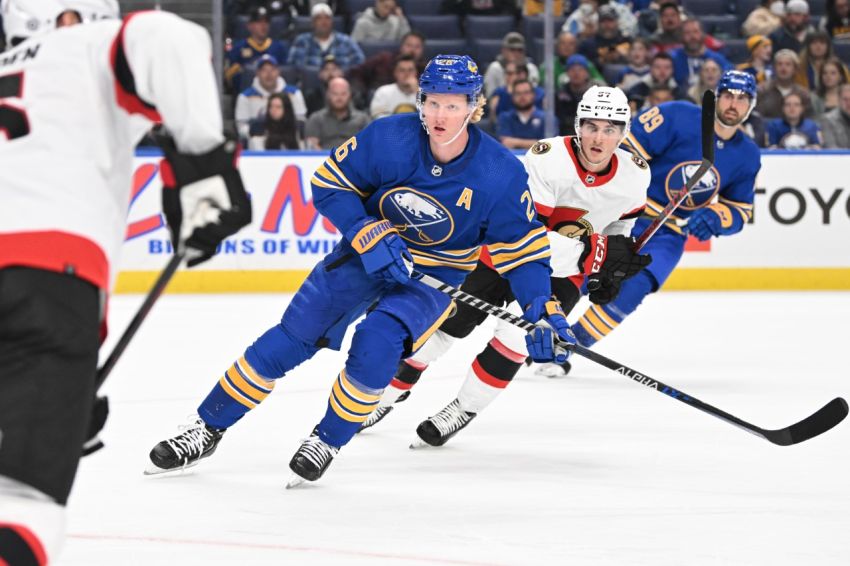 BUFFALO – The comparisons are inevitable given that both defensemen hail from Sweden and have a penchant for making jaw-dropping plays.

Sometimes when Rasmus Dahlin makes a slick move or scores a highlight-reel goal, he will inevitably hear Erik Karlsson did something similar years ago.

“I try to do my own thing, but it’s always a very cool thing to hear,” the Sabres defenseman said of being compared to Karlsson, who’s enjoying a dynamic comeback season with the San Jose Sharks, tonight’s opponent at KeyBank Center.

As Karlsson, a two-time Norris Trophy winner with the Ottawa Senators, battled injuries and endured a string of down seasons, Dahlin, 22, sensed he would recapture his old form.

Well, this year, Karlsson, 32, has morphed into arguably the NHL’s best defensemen again. Right now, his 11 goals and 33 points top all blueliners.

“This is what I’ve been waiting for to see,” said Dahlin, whose eight goals and 27 points rank second among defensemen. “I’m not surprised.”

While Karlsson still performed pretty darn well over the past few years – he compiled 10 goals and 35 points in 50 games last season – he was no longer one of the league’s elite.

But he has roared out of the gate this season, enjoying one of the best starts in decades. He recorded his 30th point on Wednesday, becoming just the third defenseman to reach that number by the 22-game mark.

“It’s amazing to watch, Dahlin said. “I’m happy for him.”

“That was a guy pretty much every one of my friends were looking up to, so he’s a big role model for me,” he said. “It’s cool to play on the same ice as him.”

In other news, Sabres defenseman Jacob Bryson will return tonight after a groin injury sidelined him four games. To make room, Lawrence Pilut will be scratched.

“He hasn’t had a lot of practice time so it’s a little different tonight when you take that into consideration,” Sabres coach Don Granato said of Bryson. “He probably won’t get his normal minutes unless we see and feel that he’s back up to game pace.”

Meanwhile, Sabres winger Vinnie Hinostroza, who left Saturday’s practice early, is day to day with an undisclosed injury, according to the team.