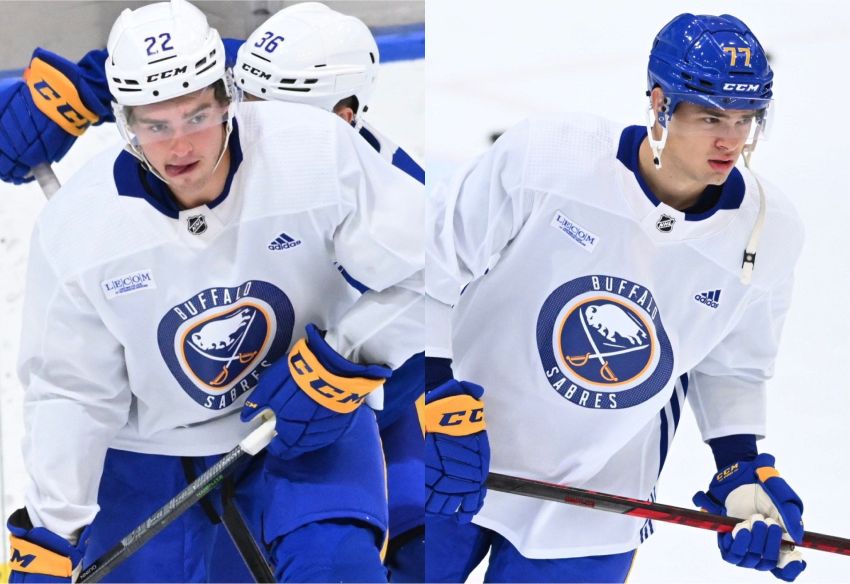 Jack Quinn (left) and JJ Peterka could have spots in Buffalo this season. ©2022, Micheline Veluvolu

BUFFALO – Michael Peca sees Sabres prospect JJ Peterka as such a rare and special talent he refers to the German winger a “unicorn.” Seriously.

Peca, an assistant coach with the Rochester Americans, can’t think of a former teammate or opponent or find anyone in today’s game who resembles the type of player Peterka, 20, can become someday.

“He has no idea how good he can be yet, which is scary,” said Peca, a popular former Sabres captain and the 1997 Selke Trophy winner. “It’s the blend of power and speed and the skill set, his hands and his shot, and his ability to play in a physical game. Like, he can play in any environment and he can dominate in any environment.

“It’s just a matter of sticking with it and being patient early in his journey because it’s gonna be easy to get frustrated. … I mean, 98 percent of guys that start their NHL career are going to face some adversity and some challenges.”

Two prospects in this week’s development camp will likely be starting their NHL careers this season: Peterka and winger Jack Quinn. Each youngster showcased massive growth in 2021-22, becoming dynamic presences as AHL rookies.

Peterka compiled 28 goals and a team-leading 68 points in 70 regular-season games for the Amerks and another seven goals and 12 points in 10 playoff outings.

Meanwhile, Quinn, 20, registered 26 goals and 61 points in just 45 outings, gaudy numbers that earned AHL Rookie of the Year honors. He mustered just two assists in the postseason, although he performed better than his numbers might indicate.

While the Sabres won’t say it, Peterka and Quinn, both of whom played their first two NHL games last season, have likely secured spots with the big club for the upcoming campaign.

“I’m not banking on getting the opportunity to be with them again,” Amerks coach Seth Appert said following Wednesday’s session of camp inside LECOM Harborcenter. “But those things will be determined at a later date.”

So far this offseason, the Sabres have signed just defensemen or goalies. The openings are there for Peterka and Quinn to grab.

“I’m not looking at really how many spots are open or trying to do the math, just getting ready and trying to improve my game this summer and continuing to take steps this summer,” Quinn said Friday. “And when camp comes, hopefully I’ll show I’m ready.”

Peca said: “I’m excited to see both of them play next year.”

Peterka and Quinn have learned their natural talent and scoring prowess will only take them so far. As last season progressed, they developed more mature games.

Peca, for example, said at the start of the year, they never expected Peterka would kill penalties.

“When I came down, I didn’t think that, either, that I’d be a penalty killer at the end of the season,” Peterka said. “But, I mean, it’s always about the ice time. If you can gain the trust from the coach also killing penalties, it means a lot for me.”

Peca said he and others helped Peterka “understand how much he can impact the game without scoring.” He needed to learn to play without the puck on defense and offense.

“Incredibly fast, powerful, instinctual,” Peca said of Peterka. “He became one of our best penalty-killers by the end of season.”

Still, it took time for Peterka and other young players to grasp new concepts. Peca said early in the season, Peterka would “be upset, he’d be frustrated.”

“Then you show him things that he did that had nothing to do with scoring a goal but that helped prevent a goal or helped us win a hockey game,” he said. “And I think as time went on, he kind of grew and matured and understood those things a lot more.”

Peca said coaching Peterka and Quinn is “the most fun you could ever expect.”

“Especially being in Rochester where we’re trying to develop these guys for the Buffalo Sabres,” he said.

The small taste of the NHL they experienced last season helped buoy their development.

“I saw what the National League was all about,” Peterka said. “And I think after that I had a different feeling, kind of like the difference between the ‘A’ and the NHL. So I think my game really grew after that as well.”

Peterka scored 24 of his regular-season goals after earning his recall in late December.

Quinn, who scored once with the Sabres, stayed in Buffalo longer because he suffered a lower-body injury.

The camp will conclude this morning at 9:15 with the French Connection Tournament, an intrasquad three-on-three challenge.