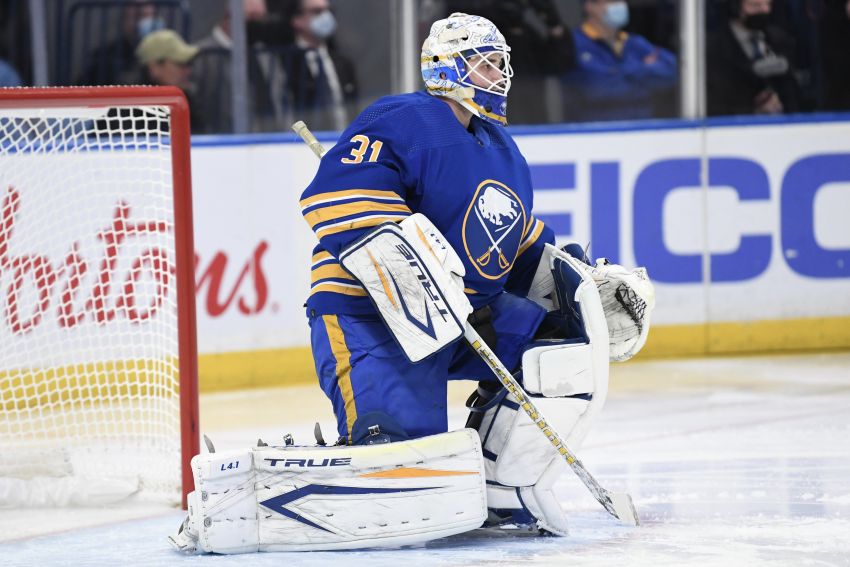 Dustin Tokarski has a 1.87 goals-against average in his last three outings. ©2021, Micheline Veluvolu

BUFFALO – Sabres coach Don Granato needed to wait to make a decision. If goalie Dustin Tokarski experienced a heavy workload Friday, then he likely couldn’t have utilized him back-to-back nights.

But Tokarski faced just 11 shots over the final 40 minutes of the Sabres’ 4-1 home win. So Granato felt comfortable starting him again Saturday in Detroit.

“The workload late in that game was not too extensive for Dustin, and that factored in,” Granato said on a Zoom call prior to the Sabres’ 3-2 overtime loss to the Red Wings. “So … we didn’t plan him going back-to-back until last night’s game. We felt comfortable after last night’s game. So the decision was in the moment.”

It turned out to be the right decision. Tokarski, 32, was sharp throughout the Saturday’s contest, making 39 saves and allowing the weary Sabres to make a late charge.

Winger Jeff Skinner tied the game at 2 with Tokarski on the bench and 1:37 left in the third period before Lucas Raymond scored 36 seconds into overtime.

“He was sharp and confident,” Granato said of Tokarski. “The saves, I think the two goals against were the only times he didn’t look very comfortable. I don’t think his confidence, I don’t question that at all at any point. But every time he was comfortable in posture he was in front of the puck and stood tall and it was great to see.

“He did not show any signs of fatigue, and that’s obviously a concern when you’re playing back-to-back. And he passed that test perfectly.”

Considering the limited options Granato has in goal right now, Tokarski could start tonight’s game against the Seattle Kraken at KeyBank Center.

No. 1 netminder Craig Anderson is week to week recovering from an upper-body injury he suffered Nov. 2. Aaron Dell, who began the season in the minors, got yanked from Wednesday’s 5-1 loss to the Boston Bruins after allowing four early goals. The Sabres also have top goalie prospect Ukko-Pekka Luukkonen with the Rochester Americans.

Tokarski struggled last week, getting yanked from Monday’s 7-4 loss to the Columbus Blue Jackets, the second straight start he departed early. But he rebounded nicely in relief of Dell on Wednesday, stopping 24 of the 25 shots he faced. He made 25 saves Friday against the Montreal Canadiens.

What changed for Tokarski as last week progressed?

“Honestly, I don’t think anything,” Tokarski said. “I think maybe just a couple mental errors on approaches to shots in the game and a half there. You’ve just got to remember what your strengths are and work in practice and have a short memory. There’s ups and downs.”

Tokarski, who has compiled a .910 save percentage this season, ended Saturday’s game on a down note, allowing Raymond to beat him between the legs from high in the slot.

“I saw it the whole way,” Tokarski said. “I think it’s just one of those ones you know I should have saved it. … (He) took something off it and (it) handcuffed me. It should have been a save.”

But Granato said the Sabres did not have access on the bench or in the dressing room to the same replays shown on television, including an overhead view. If the Sabres challenged and lost, they would’ve been given a two-minute penalty.

“I told the team, ‘I apologize, that’s a mistake, I should’ve made that call,’ I felt after,” Granato said of the challenge. “I didn’t have good enough video on the bench. We had some trouble there. You guys had much better video, I will say that. I’m sure of that, because I saw something later.

“But you would’ve run the risk of having to kill a penalty if you give up a goal, it’s 3-1, it’s a different game. But I think after the fact, it should’ve been called. So I don’t have anyone to blame but myself on that one but felt for (Tokarski), too.”

Notes: Sabres winger Brett Murray recorded his first NHL point, an assist, on center Dylan Cozens’ first-period goal Saturday. Granato recently watched Murray score two goals in Rochester and wanted to give him another look. “I liked his game a lot,” Granato said Friday. “We certainly believe in him. I wanted, I’ve been pushing, I’ve been excited to get him games.” … Ex-Sabres defenseman Will Borgen, who was claimed by Seattle in the NHL Expansion Draft, sat out the Kraken’s first 20 games before finally making his season debut Saturday. … The Sabres, who just played five games in seven days, had Sunday off.