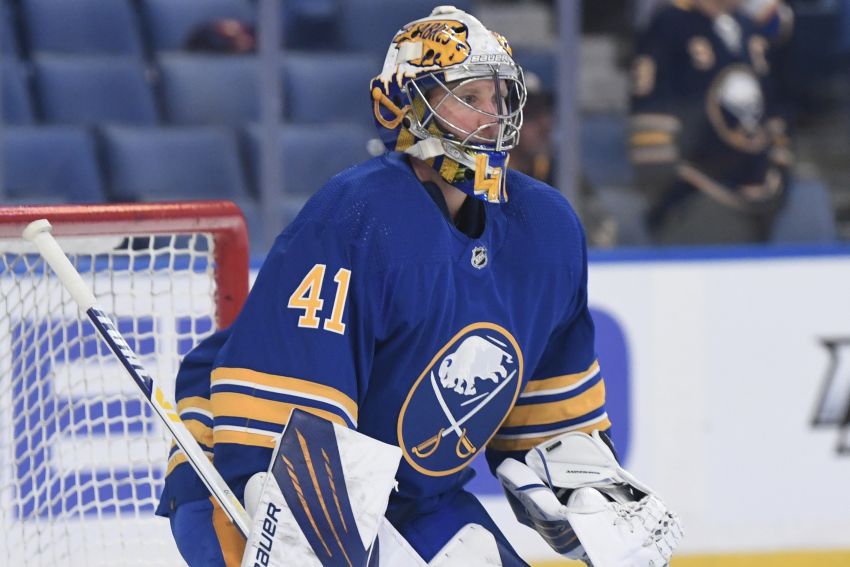 BUFFALO – After Craig Anderson suffered an upper-body injury Nov. 2, the Sabres said he was day to day. But the veteran goalie, whose absence has become glaring as the rebuilding team keeps struggling, is still sidelined.

“Because of our initial report, based on where we’re at, it is a concern,” Sabres coach Don Granato said on a Zoom call this morning. “Obviously, we didn’t feel he would be out this long and it has lingered, so there is concern with respect to that, definitely.”

Granato has been utilizing goalies Dustin Tokarski and Aaron Dell. Tokarski will likely start tonight against the Montreal Canadiens, his former team.

The Sabres have allowed five or more goals in six of the last eight games.

After getting yanked from two straight games, Tokarski rebounded well in Wednesday’s 5-1 loss to the Boston Bruins, stopping 24 of the 25 shots he faced in relief of Dell.

In other news, winger Drake Caggiula, who missed Wednesday’s game, is listed as week to week with an upper-body injury on the report the Sabres released this morning.

“He had been trying to play through it and he’s an ultra-competitive guy and a physical guy. It inhibited the way he needs to play and the way he can play,” Granato said. “We have to give him time to heal and get back healthy again. It is a loss for us because he’s such a competitor and it’s a bummer that he’s been having to play through that over the last little bit. It’s tough.”

Update: The Sabres this afternoon recalled winger Brett Murray from the Rochester Americans and placed Caggiula on injured reserve.

Update: Murray will play against the Canadiens. Ruotsalainen will be scratched.

Caggiula has compiled two goals and five points in 18 games this season.