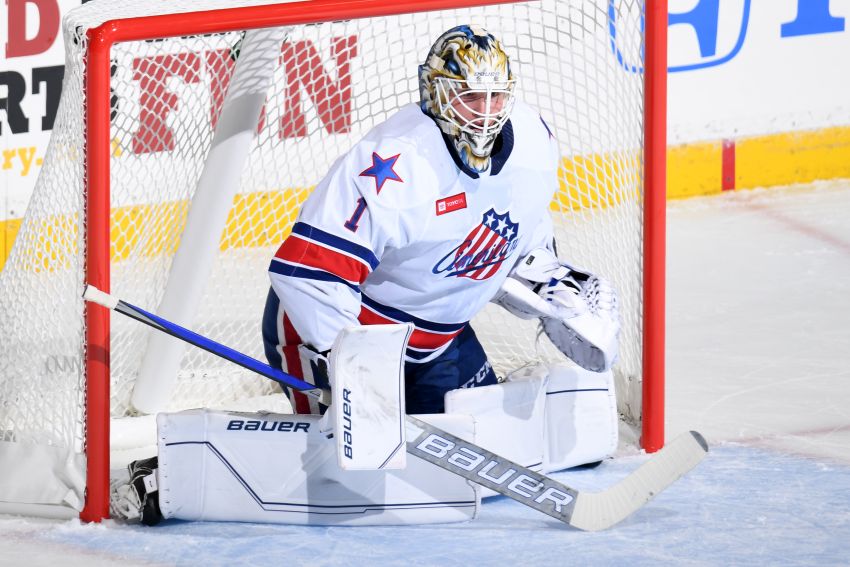 BUFFALO – Given the Sabres’ recent goaltending woes, the rebuilding team could be forced to award prospect Ukko-Pekka Luukkonen a look soon.

Maybe Luukkonen would stay for just a game or two. Or perhaps he might receive regular action while No. 1 goalie Craig Anderson, 40, recovers from his upper-body injury.

The Sabres, as evidenced by the ugly 2-9-1 streak they carry into tonight’s game against the Montreal Canadiens at KeyBank Center, need help everywhere. But right now, goaltending is their most pressing need.

Recalling Luukkonen, 22, from the Rochester Americans would be their easiest option. In 10 games since Anderson was injured Nov. 2, the Sabres have allowed an NHL-high 44 goals. Something must change soon.

Luukkonen backstopped the Amerks to a 4-2 win Wednesday in Utica, making 27 saves as the Comets lost for the first time this season.

Meanwhile, Aaron Dell, who seemed to be finding a bit of a groove, was yanked after giving up four first-period goals in Wednesday’s 5-1 loss. He looked shaky against the Boston Bruins, falling to 0-4-0 this season.

So far, Dell, 32, has registered an awful .862 save percentage, the second-worst number among goalies who have played five or more games.

Dell’s replacement for the final 40 minutes, Dustin Tokarski, stopped 24 of the 25 shots he faced. After getting pulled from two straight starts – the first outing he was hung out to dry – Tokarski enjoyed a strong bounce-back effort.

Tokarski, 32, has mostly subbed admirably for Anderson, who’s week to week. Overall this season, Tokarski has compiled a .906 save percentage.

But the Sabres have a jam-packed schedule. They also play Saturday on the road against the Detroit Red Wings and Monday at home against the Seattle Kraken.

Tokarski has never played more than 17 games in a big league season. Even in his 13th pro campaign, he’s a bit of an unknown.

Of course, Luukkonen, having compiled a 5-6-1 record with a 3.46 goals-against average and an .883 save percentage in 11 games, hasn’t made the strongest case to be recalled.

The youngster labeled as the Sabres’ goalie of the future years ago has experienced a wildly inconsistent season.

The 6-foot-4, 196-pound Finn started slowly, registering an .818 save percentage in his first four games. He rebounded nicely earlier this month, however, recording his first shutout for the Amerks and earning AHL Player of the Week honors.

“That’s the biggest thing that he’s fighting for and we want him to fight for is to not be great one night and just OK the next,” Appert told the Times Herald on Tuesday. “It’s to be really, really good every night. And he had a great week the week before. He was outstanding, very deserving of the accolades he received. And he wasn’t the same goalie on (last) Wednesday or on Saturday.”

While Luukkonen played his first four NHL games late last season, if the Sabres summon him, he almost certainly needs to return to the minors for more seasoning.

Luukkonen has played just 63 pro games in North America, including 36 in the AHL. After undergoing hip surgery in 2019, he did not return until that November. Then the COVID-19 pandemic ended his rookie season early. Last season, the pandemic forced the AHL to play a truncated 29-game schedule.

“(He’s) a goalie who should be 90 to 100 games into his pro career but is only (63) because of the injury two years ago and because of COVID last year,” said Appert, a former NCAA goalie. “There’s no replication in goal for experience in games and adversity and failure and success that you can grow and learn from. And so he’s just going through that.”

Appert, who said he has “100 percent belief” in Luukkonen, said players must generate confidence from more than talent.

“You have some confidence because you’re a talented player,” he said. “But real inner confidence comes from facing miserable adversity and beating it and coming out on the other side and then maybe being the guys that … won a bunch of Game 7s, you won a World Junior (Championship) like (Ukko-Pekka) did. That’s where real confidence is earned and there’s just no faking it in goal. So it takes time and you have to go through a lot of ups and downs to get there.”

One thought on “Could Sabres look to Amerks goalie Ukko-Pekka Luukkonen for help?”