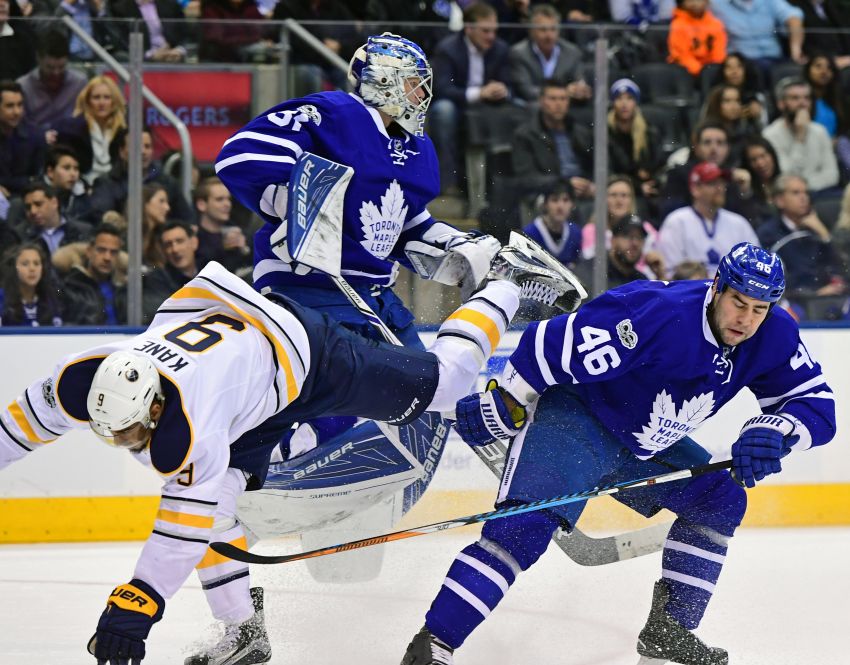 BUFFALO – Sabres winger Evander Kane joked he crashed into his “favorite wall” after scoring the overtime winner in Tuesday’s 5-4 thriller against San Jose.

His hand, which was wrapped after the game, is still bothering him. He put it behind his back this morning during his chat with reporters.

Kane said he felt “great” skating with his teammates this morning, although he didn’t take any line rushes. He did, however, practice on the power play.

“It’s an important time of the season and I felt maybe better than I thought I would this morning,” Kane said.

Kane’s status for tonight’s game will be announced later.

With Kane hurting and center Zemgus Girgensons out with what Sabres coach Dan Bylsma called a “full-” or “mid-body injury,” the Sabres recalled centers Derek Grant and Evan Rodrigues from the Rochester Americans.

Update: Kane will play. Rodrigues will be scratched.

The Sabres reclaimed Grant, who played 35 games with them earlier this season, from the Nashville Predators on Monday. He was waived for the first time Jan. 11.

Check back later for more on Grant and Rodrigues.

Girgensons is day-to-day after enduring some big hits “over time,” Bylsma said.

In other lineup news, Bylsma said defenseman Justin Falk will return after a one-game absence. Taylor Fedun will likely be scratched.

Here are the lines the Sabres used this morning from left to right:

– The Sabres have shut out the Ducks seven times in 32 all-time meetings between the teams. One shutout every 4.57 games, according to Sabres PR, is the team’s highest shutout-to-games ratio against any club.

– The Sabres are 12-1-3 in their last 16 games against Western Conference opponents and 10-4-2 overall against the West this season.