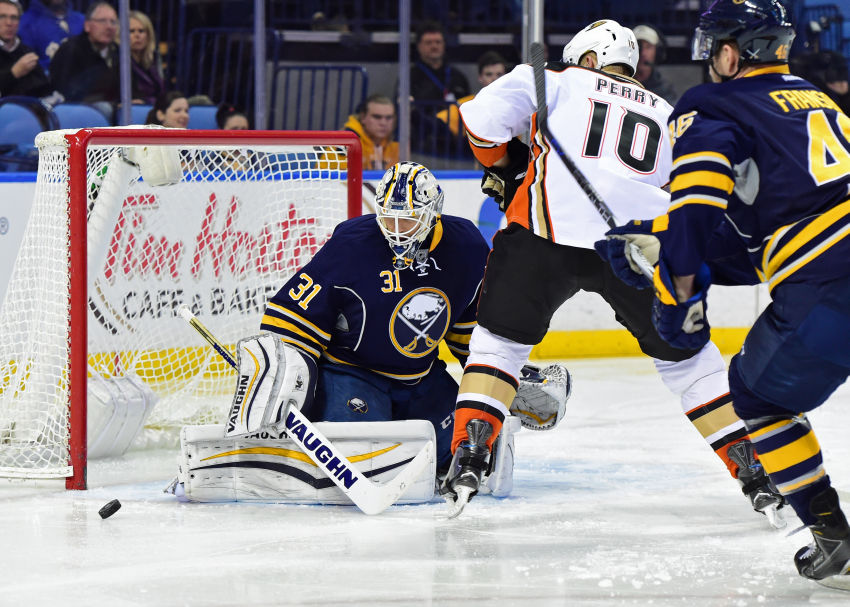 BUFFALO – Chad Johnson will garner the headlines from the Sabres’ 3-0 win over the Anaheim Ducks, and he should. The goalie dazzled Thursday, stopping a career-high 44 shots, a franchise-record for a shutout.

But the Sabres received contributions throughout the lineup in their third win in four games and 14th overall this season.

The fourth line, so bad last game, was the Sabres’ best trio for chunks of the night, creating defenseman’s Jake McCabe’s second-period goal. Evander Kane, who had gone quiet after a torrid two-game run earlier this month, opened the scoring. And Jamie McGinn, perhaps the team’s most underrated player, sealed the game in the third period.

McGinn scored shortly after the Ducks started the third period by outshooting the Sabres 12-0. They had four in 26 seconds during a power play at one point. Johnson made 19 saves overall in the final period and 14 in the first before the 18,801 fans inside the First Niagara Center.

“I wasn’t thinking shutout at all,” Johnson said. “That doesn’t really cross my mind. They had some good chances in the first with guys coming down the wing. Maybe I make it look a little easy every now and again. We just defended really well as a group.”

True, it hardly looked like Johnson was under siege during his fourth NHL shutout. The 29-year-old, who has mostly been alternating games with rookie Linus Ullmark, appeared dialed in most of the night, hardly moving for many saves.

“I had some juicy rebounds, especially in the first period late,” he said. “There were pucks sitting there for them, and our guys did a good job of getting sticks and battling there. I’m surprised a little bit that there weren’t more players around there.”

Sabres coach Dan Bylsma said he counted six instances in the first and second periods in which the Ducks generated strong chances that “never looked like (they were) going to get by” Johnson.

“Real calm in net, real solid in net right throughout the whole game,” Bylsma said. “It got a little hairy there on the power play where they had a flurry with the puck in the crease and he was the guy that was probably the most under control. I’m glad we buckled down and got the shutout for him.”

“We’re playing a lot better defensively in front of the crease and boxing guys out than we did at the beginning of the year and you see the results,” Johnson said. “Whether I’m in net or Linus is in net or whoever’s in net, we’re going to get good results just because the deflections aren’t happening and the rebound goals aren’t happening.”

Johnson hadn’t posted a shutout since March 21, 2014. He has stopped 76 of the last 77 shots and won two straight starts.

The Sabres scored the only goal Johnson needed 2:36 into the second period, when rookie Jack Eichel’s wrist shot from the point hit Kane’s right foot in front.

Then, a game after they were the worst combination on the ice, the fourth line of Nick Deslauriers, Cal O’Reilly and David Legwand provided the dagger. Following some strong zone time, O’Reilly fed a pinching McCabe a backhand saucer pass from down low into the left circle.

“They had carried the play a little bit in that period and Cal O’Reilly could’ve had three assists in that shift,” Bylsma said.

Deslauriers added: “I think me Cal and Leggy had a couple good shifts in the o-zone, and it just pushes everyone. As the fourth line, that’s what we have to do, we just have to give them momentum.”

O’Reilly, who played his second game with the Sabres, registered his first NHL point since Feb. 5, 2012. Doing it with his brother, Sabres center Ryan O’Reilly, made it even better.

“A pretty special moment, especially being on a team with my brother,” Cal O’Reilly said. “For a while I wasn’t sure if I’d ever play in the NHL again. The Sabres organization gave me a chance and it’s pretty special.”

Incredibly, the Ducks, perhaps the NHL’s biggest disappointment this season at 11-14-5, got shut out for the seventh time this season. They have an NHL-low 55 goals.