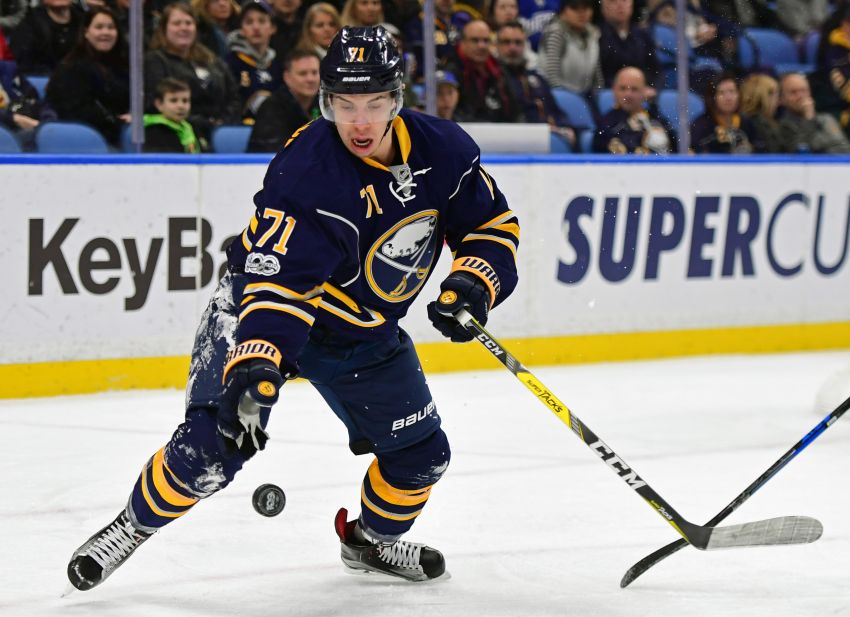 Let that sink in.

“It’s a little disappointing Rodrigues is one of our best players,” Sabres general manager Tim Murray said Wednesday. “It’s great for him. But I’m not sure that’s what should’ve happened in those two games.”

“He’s earned it,” coach Dan Bylsma said Saturday prior to the Sabres’ 2-1 shootout loss to the Tampa Bay Lightning inside KeyBank Center. “We don’t have a lot of other centermen here right now to steal it from him.”

With leading scorer Kyle Okposo week-to-week after hurting his ribs, instead of recalling a forward, the Sabres dressed Nick Deslauriers against the Lightning.

Deslauriers, a healthy scratch the four straight games and seven of the previous nine, has zero points this season. Okposo, meanwhile, has 19 goals and 43 points.

The Sabres have already used two of the four late-season recalls they are allowed on Bailey and Rodrigues, Bylsma said. They didn’t think about summoning someone from the AHL for Okposo, he said.

The gritty Deslauriers skated beside center Zemgus Girgensons and Bailey on Saturday.

Deslauriers was almost a factor with his stick. He narrowly missed two scoring chances during eight minutes, 50 seconds of ice time, his highest total since Jan. 3.

Sabres captain Brian Gionta moved up to Okposo’s spot beside O’Reilly and Kane.

Notes: The Sabres scratched defenseman Justin Falk for the seventh straight game. … The Sabres play a road tilt against the Pittsburgh Penguins today at 5 p.m. … Penguins superstar Sidney Crosby has 15 goals and 50 points in 32 career games against the Sabres.