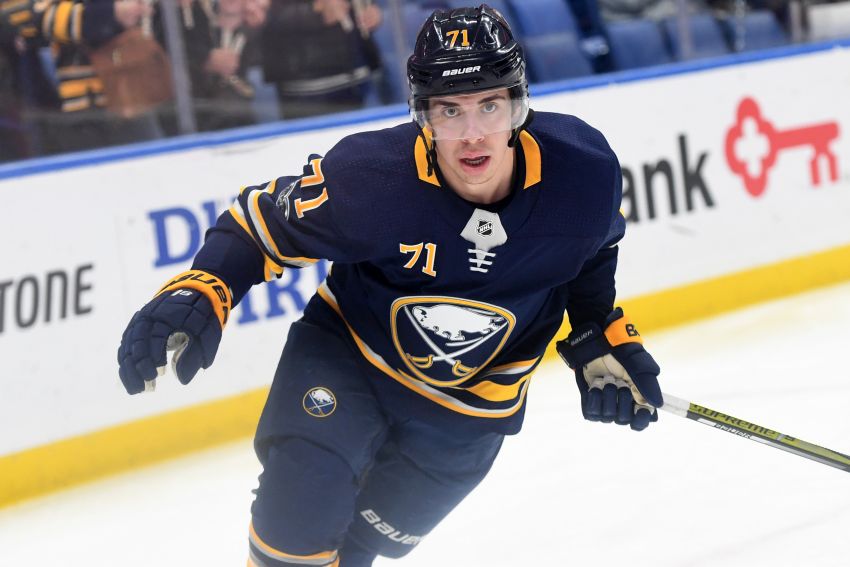 “We kind of knew where each other were all over the ice,” Rodrigues said Thursday prior to scoring his first goal in 22 games. “We seemed to click, seemed to be able to make plays kind of without looking at each other.

But other than the odd shift with the Sabres, Eichel and Rodrigues hadn’t skated together as NHL linemates until Thursday’s 4-3 win against the New York Islanders inside KeyBank Center.

With Johan Larsson back from his two-game suspension, the Sabres have five centers. So coach Phil Housley moved Rodrigues to the left wing beside Eichel and Sam Reinhart.

“Just trying to change different things, just trying to get everybody going,” Housley said. “I think (Rodrigues) could really have good chemistry with Jack.”

Perhaps playing with his close friend, the Sabres’ No. 1 center, can ignite the speedy Rodrigues. He hadn’t scored since a two-goal performance Dec. 10, his third game this season.

“I started to press a little bit, it’s in the back of my mind, I’m starting to almost force things,” Rodrigues said. “I have to continue to remind myself just to play simple, let my offensive instincts take over.”

“You kind of take a step back and sometimes you have to do that just to take a step back to forward,” Rodrigues said. “That’s what I’m trying to do here. It’s good to regroup, watch a game from the stands, pick things from the game.”

Rodrigues scored 13:21 into the first period before assisting on Reinhart’s late winner.

“I’m really happy for Evan getting a goal, and hopefully that’ll boost his confidence,” Housley said. “But I really liked that line. They really mixed well.”

Casey Nelson, a recent recall quickly earning Housley’s trust, played with Marco Scandella, Ristolainen’s partner much of the season on the No. 1 pair. Ristolainen, meanwhile, moved back and skated with Nathan Beaulieu.

“He understands he hasn’t played well since the All-Star break,” Housley said of Ristolainen’s recent play. “He puts enough pressure on himself. I have no problem with the way he’s been competing down low and battling. I think just the execution on passes, getting shots to the net has to be better.”

With McCabe out and defenseman Justin Falk a healthy scratch, Victor Antipin and Josh Gorges, scratches Tuesday, returned as a tandem.

Thanks to McCabe’s early departure Tuesday, Ristolainen played a season-high 32 minutes, 39 seconds on a night he was struggling.

After that mark, Housley said, Ristolainen’s play begins to dip. His errant pass in overtime Tuesday helped sink the Sabres.

Notes: The Sabres also scratched winger Scott Wilson. … Housley said defense prospect Brendan Guhle, out with a lower-body injury since Jan. 20 with the Rochester Americans, has started skating and is day-to-day.