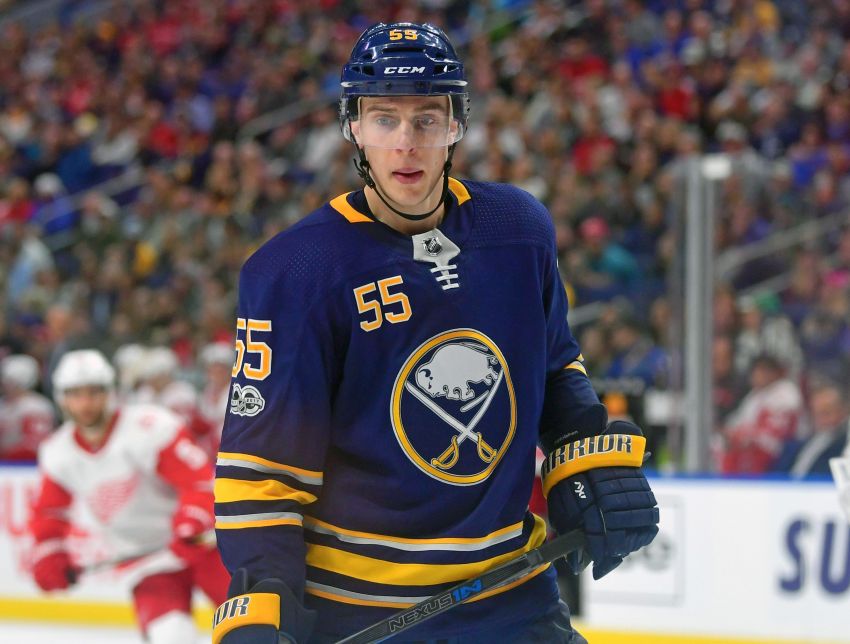 BUFFALO – Rasmus Ristolainen celebrated another birthday Friday, and if you thought the Sabres defenseman was a bit older than his 23 years, you’re probably not alone.

Having cracked the NHL at 18, Ristolainen is already in his fifth season. This afternoon’s tilt against the San Jose Sharks will be his 285th appearance with the Sabres.

It feels like the Finn has been around forever.

By his second season, Ristolainen was the Sabres’ best defenseman, and he has been playing mega minutes for three years, averaging more than 25 a contest.

At an age when some players are taking their first steps into the NHL, Ristolainen has already endured a lot, playing for four head coaches and three general managers.

All the while, the Sabres have struggled, finishing dead last in the league twice and never sniffing the playoffs.

“I’ve been here quite a bit,” Ristolainen said Friday inside KeyBank Center. “When I got here my first year, there’s not too many guys left. Yeah, Buffalo’s been good to me, feels like a second home, so I really enjoy my time here. I believe we’re going to get things turned around moving forward.”

Turning things around, of course, would mean making the postseason for the first time since 2011.

“One thing I want to experience is playoff hockey,” Ristolainen said. “That’s a big goal, and I think that’s when I would be at my best.”

Right now, even with 71 games left, the playoffs look unlikely for the 3-6-2 Sabres. Ristolainen’s so-so play – he has zero goals and four assists – has contributed to their weak start. The Sabres will likely go nowhere unless Ristolainen starts showcasing his old form.

To be fair, the defense has struggled across the board. Housley, a Hall of Fame defenseman, wants his blue line to be aggressive and move the puck.

Incredibly, the Sabres are the NHL’s only team without a goal from a defenseman.

Ristolainen is supposed to be the guy leading the attack.

“I can do that,” said Ristolainen, who has averaged eight goals and 43 points over the past two seasons. “I haven’t really done that yet. I’m not happy that offense is far apart from my game right now. I can do more.”

Housley can’t give Ristolainen much more ice time. Like his predecessor, Dan Bylsma, Housley said before the season he wanted to trim Ristolainen’s minutes.

But with four defenders injured, Housley has been leaning on Ristolainen more than ever. So far, Ristolainen has averaged an NHL-high 27 minutes, 29 seconds an outing, 43 seconds more than Washington’s John Carlson, who ranks second.

Ristolainen has skated more than 28 minutes in four of the last five games and under 24 minutes only once this season.

Housley said the injuries – Zach Bogosian, who has been sidelined with a lower-body ailment all season, likely would’ve played some big minutes – and some overtime games have upped Ristolainen’s ice time.

“We’ve had to lean on him a little bit too much,” Housley said.

Still, Ristolainen, who averaged 26:28 a game last season and 25:16 two years ago, likes the minutes.

“I’ve felt pretty good minute-wise, I haven’t been too tired there,” Ristolainen said.

He added: “Pretty much every team I’ve played, I play the big minutes. I think I’m in good enough shape I can handle those.”

Housley, a puck-mover throughout his 21 seasons, said Ristolainen’s ice time has contributed to his slow start.

“When you play that many minutes in the style that we want to play, it certainly is affecting him,” Housley said. “He’s got to continue to just make good puck decisions, get up ice as much as possible. I’d like to see him come with speed on the power play breakout a little bit more.

“But when you’re the guy going back there and getting it every time you don’t execute, I can feel for him, because he’s got to go back and get the puck again. I think Rasmus will be fine. He’s a tough competitor and a fierce competitor. He wants to win.”