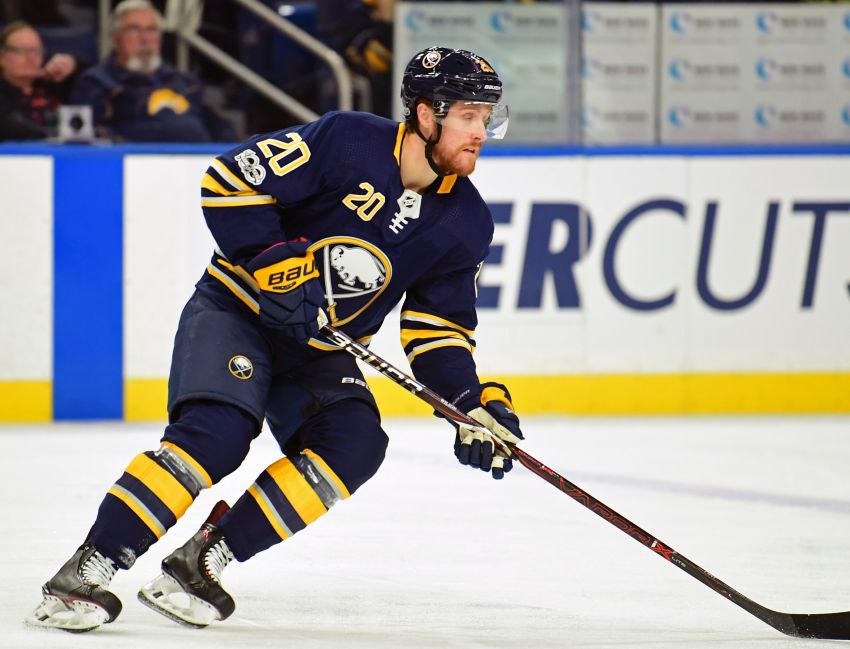 Wilson made 98 total appearances last season, including 20 in the playoffs. On June 11, the winger skated more than 13 minutes in Pittsburgh’s Cup-clinching victory.

But by October, Wilson’s days with the Penguins were numbered. They needed centers and had too many wingers. Wilson often sat out as a healthy scratch.

On Oct. 21, the Penguins traded Wilson to the Detroit Red Wings for center Riley Sheahan. Wilson played 17 games before the Red Wings dished him here Dec. 4 for a 2019 fifth-round pick.

So Wilson, 25, played for three teams over a wild 44-day stretch.

“It’s been pretty stressful, just moving around, finding places to live and meeting new people all the time,” Wilson said Sunday inside KeyBank Center. “It’s been a long couple of months. Even from the start of the year it’s been pretty long.

“Hopefully I get settled in here in the next little bit, then have some time to relax and take your time and just get your mind back.”

While the 5-foot-11, 183-pound Wilson sat out Tuesday’s 3-0 loss to the Boston Bruins, he skated among the regular forwards Wednesday, meaning he should return soon.

On a struggling team lacking depth and experience, the speedy Wilson has been a nice addition for the Sabres’ third or fourth line. They’re 2-1-3 with him in the lineup. He sat Tuesday because center Jacob Josefson returned from an ankle injury.

“You get some good internal competition now,” Sabres coach Phil Housley said of adding depth. “We haven’t had that in a long time, it’s a good situation to be in. It’s (also) a tough situation to be in, for sure, as a coach, because you got to make some tough decisions.”

“Knowing Bottsy makes it a little bit easier,” Wilson said of joining the Sabres. “They made it easy for me to kind of transition over.”

Sure, moving around can be difficult, but on the other hand, Wilson has also been wanted by NHL teams.

“That’s what I think everybody strives for, that’s why we play,” he said. “You want to go somewhere where you’re going to be valued, used in certain situations. I think that’s a huge part of it is going somewhere where they want you.”

“I was only there for (five) weeks, so it’s not like I built really good relationships with the guys,” he said. “All the guys there were great.”

However, saying goodbye to Pittsburgh was “tough,” Wilson said. Still, he understood if he wanted to further his career, it was best to leave.

“I wanna play hockey, I don’t want to be sitting there and thinking, ‘Oh, I could’ve been doing this,’ whatnot,” he said. “At the end of the day, I think we’re all kids just playing the game.”

Wilson earned NHL playing time in 2016-17 because he said he found his “identity.” After leaving UMass Lowell following his junior season, Wilson, like a lot of solid prospects, started piling up points in the AHL.

“You can’t really play like that (in the NHL),” said Wilson, who has one assist in 26 games this season. “So I think finding myself with that gritty, two-way penalty kill aspect (helped). The points haven’t been coming for me this year, but I think last year I kind of found my identity and I’ll just try to stick with that now.”

One thought on “Scott Wilson comfortable with Sabres”