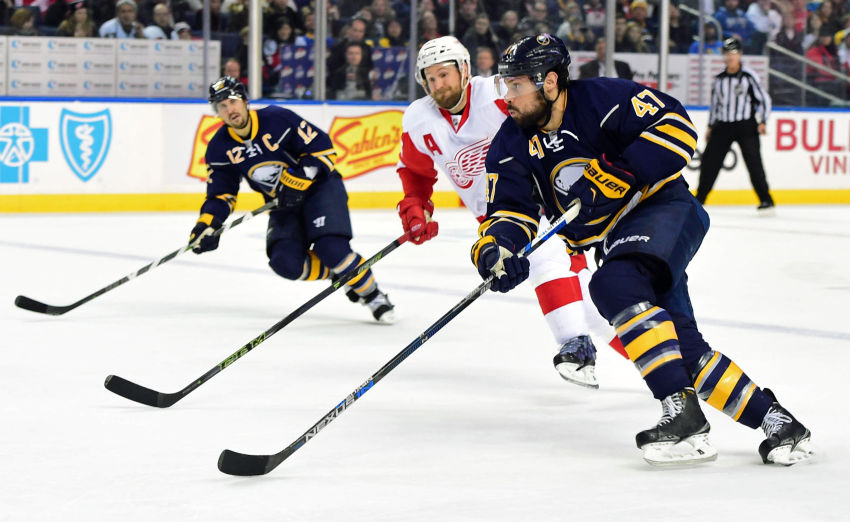 BUFFALO – When Mark Pysyk returns from his broken foot later this week, the Sabres will receive a smooth, puck-moving defenseman and have what coach Dan Bylsma believes is a good problem.

Assuming no one else gets injured before Pysyk plays his first game since Nov. 17, the Sabres, who have used the same six defensemen the last 11 games, will have eight on the roster, “not a good number to have,” Bylsma said.

“I’m good with that problem,” Bylsma said Monday inside the First Niagara Center after the Sabres prepared for tonight’s home tilt against the scorching Florida Panthers, who have won nine straight games.

Almost halfway through the season, the Sabres, losers of four straight contests, have showcased development all over the ice, yet still rank 29th in the NHL with only 34 points.

The defense corps, while hardly elite, might be the Sabres’ most improved area. The Sabres have allowed 33 fewer goals through 39 games compared to a year ago and trimmed six shots off a contest from the end of last season. Much of that, of course, can be traced to the defensemen.

A season ago, the Sabres relied heavily on the likes of Andre Benoit, Andrej Meszaros and Tyson Strachan. The trio combined for a ghastly minus-62 rating in 165 games. Not surprisingly, all three are out of the NHL.

Now, Bylsma might have a difficult decision looming. Another defenseman must sit out when Pysyk’s ready. Despite some solid play from Carlo Colaiacovo earlier this season, Bylsma has already scratched the veteran 11 straight games.

“I think it creates that little bit of competition within,” Sabres defenseman Josh Gorges said about the depth. “It’s also a reminder to all of us your job is never safe and you should never take it for granted. … There’s a lot of guys that are hungry and waiting to come in and do your job. It’s good internal pressure that we’ll have as a group.”

The group doesn’t possess much flash. Even with Rasmus Ristolainen rapidly developing into a franchise defenseman and playing big minutes beside Gorges, the Sabres still want to utilize a defense by committee.

“We don’t have a straight shutdown pair and we’re going to count on the six to defend against the opposition,” Bylsma said.

When a lower-body injury sidelined Zach Bogosian for six weeks earlier this season, the Sabres leaned on Ristolainen and Gorges as the shutdown pair. But with Bogosian’s recovery and rookie Jake McCabe’s emergence giving the Sabres what Bylsma called a “credible pair,” he has spread the minutes out a little more.

“I think you’ve seen that over the last six or seven games,” said Bylsma, who uses Cody Franson and Mike Weber as his third pair. “Josh’s minutes haven’t been as large as they were when it was just the two guys shutting down the opposition’s top line. Zach’s kind of stepped into a little more of that position against other teams’ top guys. We are more by committee.”

Finally, 22 games into his season, Bogosian might be feeling comfortable again. For perhaps the first time all season, Bogosian displayed some jump when he roared in on a breakaway late in Saturday afternoon’s 4-3 loss to Detroit.

Bylsma thinks Bogosian, who likely hurt his groin or hamstring early in training camp, has had the injury on his mind.

“To try to get up to speed in the middle of a season is a difficult thing. I think while he’s been healthy, he’s still working to get up to that speed.”

Pysyk should be fully up to speed later this week. That will give the Sabres another asset on the blue line.

“He just does all the little things well,” Gorges said. “He’s not a flashy guy, he’s not a guy that’s going to go out there and people are going to be wowed with some spectacular play, but he’s a very headsy player. He sees the ice and he just subtly makes good plays all the time. That’s a big thing on the back end.”