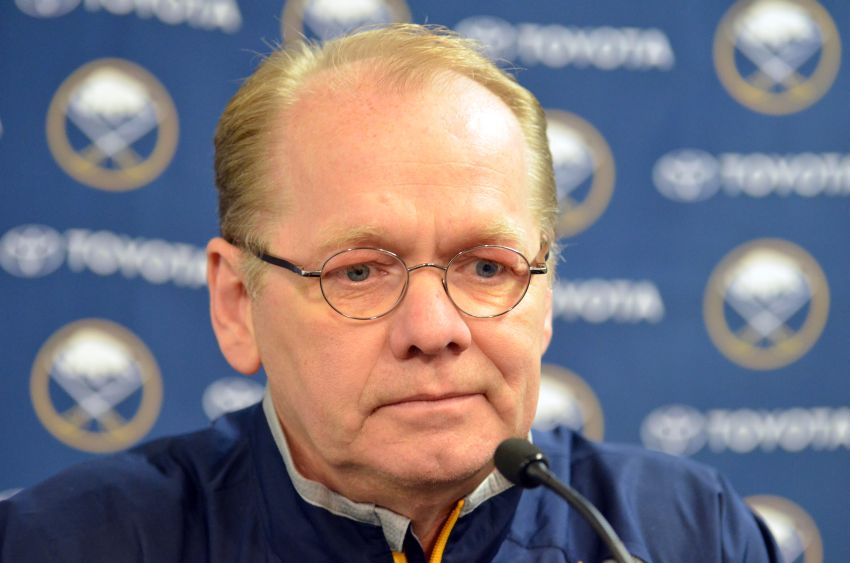 “The nature of this business as you move through July, lineups get more and more settled, there’s less movement,” Regier said Friday inside the First Niagara Center during the second intermission of the team’s annual prospect scrimmage. “Then training camp starts and things begin to change again at that point.”

Regier said he last spoke to the players’ agents around the draft. He hasn’t had any contract extensions talks.

“Talking to my counterparts around the league, that’s not unusual right now,” Regier said about the extensions. “For whatever reason, there’s not a lot of activity on players that are slated to become unrestricted in ’14, and there have not been a lot of contracts signed with those players now. I don’t know whether that will change in the next month or six weeks.”

Regier doesn’t believe the stars’ presences would be a distraction.

“I think that’s something we’re aware of and would deal with, and I think it would dissipate or disappear,” he said.

On Wednesday, though, Ristolainen said he had a European contract and didn’t think he could play in the minors.

No details about were given. Regier said the Sabres would prefer to have the Finn develop close to Buffalo.

– Regier said Henrik Tallinder’s reacquisition from New Jersey on Sunday “was an opportunity for us to bring back a defenseman that we were very familiar with.”

The 34-year-old Tallinder, who teamed with struggling defenseman Tyler Myers all of 2009-10, his last season here, wasn’t brought back simply for Myers’ benefit.

– Regier said the Sabres settled on buying out winger Nathan Gerbe just a couple of days before he was waived last Wednesday.

After getting scratched twice in March, Gerbe, who scored five goals in 42 games last season, said he couldn’t do much with the limited ice time he was receiving. As he struggled for two seasons, newcomers like Brian Flynn and Corey Tropp established themselves.

“He’s a goal scorer,” Regier said. “Hopefully, he regains that touch. He certainly had it in the American League and had it briefly in the National Hockey League.”

When the market opened last Friday, the Sabres pursued talent “just a little heavier” than they are now, Regier said.

Since a big opening day in which teams spent more than $400 million on players, the market has stalled. Regier said the salary cap, which is coming down to $64.3 million, “is a real big part of it.”

“Any discussions I have now involve taking back money, moving money,” he said. “Money plays a very big role, and I think you can look at clubs you wouldn’t expect to be up and around $60 million-plus, and they’re there.”

– Regier said Chadd Cassidy, who took over Rochester on an interim basis when the Sabres promoted Ron Rolston on Feb. 20, is the Americans’ new permanent coach.

What about Cassidy, who went 16-11-1 as coach, impressed Regier?

“The job he did on such short notice,” he said. “When I spoke with him, (I noticed) his poise, his composure, steadiness, his ability to relate to the players, communicate with the players and his understanding of the game. I talked to some of the older players like Matt Ellis. Matt Ellis had only good things to say about him and how he handled the situation.”

Former Sabres center and Amerks center Chris Taylor will be Cassidy’s top assistant. The Sabres will also hire another assistant.

– Regier believes the 2013-14 NHL schedule will be released next week.