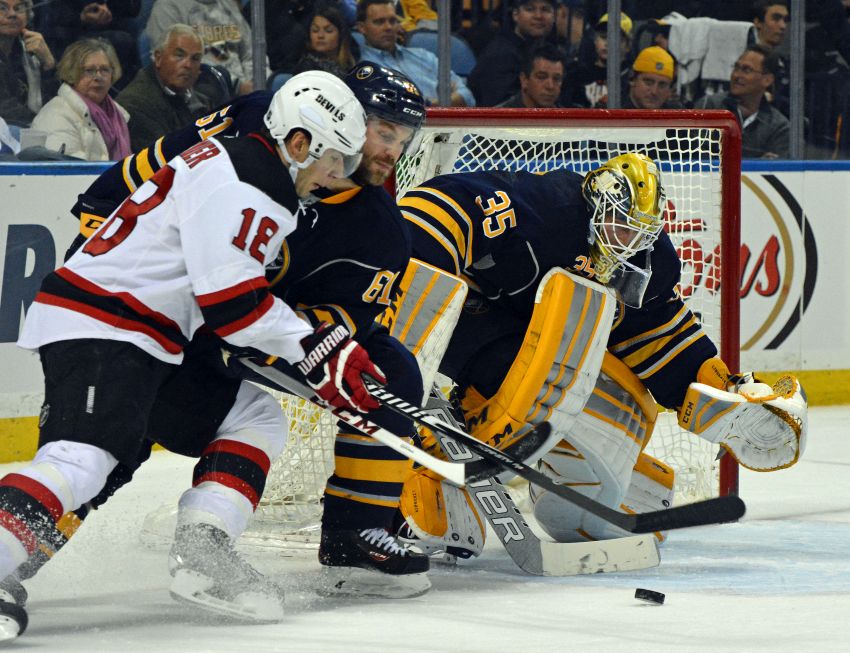 BUFFALO – Just like that, 29th place – a precarious spot that wouldn’t guarantee the Sabres either Connor McDavid or Jack Eichel, the mega-draft prospects they covet – is back in play.

Sorry, fans, the race isn’t over yet. The Sabres’ 4-1 victory Monday in Arizona moved them to within four points of the Coyotes, who looked awful throughout the night.

The 30th-place Sabres also have a game in hand, so after tonight’s tilt against the hapless Toronto Maple Leafs inside the First Niagara Center, they could be just two points behind Arizona. The Sabres would lose a tiebreaker because they have fewer regulation-overtime wins.

Still, here’s why so many Sabres fans are fretting: Buffalo faces three bottom-feeders and only three playoff opponents. The Coyotes, meanwhile, close with five games against teams either in the playoffs or fighting for a spot.

The Sabres are 4-7-1 this season against their remaining opponents.

– Home Monday against the Carolina Hurricanes (67 points, eighth in Met).

– Home April 11 against the Pittsburgh Penguins (95 points, second in Met).

The Coyotes are 4-7 against their remaining opponents:

– Road Tuesday against the Calgary Flames (91 points, third in Pacific).

– Road April 9 against the Vancouver Canucks (93 points, second in Pacific).

Six days after Sabres fans cheered for the Coyotes throughout their 4-3 overtime win here, what could happen tonight? Games against the Leafs usually feature a loud bipartisan crowd. Would Sabres fans really root for the Leafs? Are four home games down the stretch harmful?

The Sabres, who had Tuesday off, are 12-21-5 at home this year. They annihilated the Leafs 6-2 on Nov. 15 here in arguably their most dominant performance all season.

Usually late-season games between the Sabres and Leafs have some real meaning in the standings. Both teams are rarely awful at the same time.

In his first 52 games, Sabres defenseman Andrej Meszaros scored three goals. In the last two games, the Slovak has four goals, two in each outing.

Where the heck have these goals come from?

“Shooting the puck, I guess,” Meszaros, who possesses a wicked shot, told reporters Monday in Arizona.

Meszaros has seven shots in his last two games – three and four – but just 55 all season. The 29-year-old had only three games with three or four shots before scoring twice in Saturday’s 5-3 loss in Colorado.

“Last couple of games, the puck’s getting through for him, and good for him,” Sabres coach Ted Nolan said.

Meszaros did little after signing a one-year, $4.125 million deal on July 1, becoming arguably one of the NHL’s worst defensemen and a whipping boy for frustrated fans.

But he’s been showcasing some of the talents that made him one of the league’s best young defensemen not long ago, possibly saving his career.

The award recognizes the “NHL player who best exemplifies the qualities of perseverance, sportsmanship, and dedication to hockey.”

“I owe everything I have to this game,” Weber said. “As a young kid, my parents weren’t hockey people. At 6 years old I remember walking down to the local arena and seeing it. At 6 years old, I fell in love with it. I knew I had to play this game.”

The 27-year-old is perhaps the Sabres’ most passionate player – on and off the ice. So far, he’s the only player who voiced his displeasure with Buffalo fans for cheering for the Coyotes.

Weber made himself into an NHL talent after some rough times. When he got cut from his eighth grade team in Pittsburgh, his family drove him nearly 300 miles a day so he could play for a team in Cleveland. He was home-schooled on the Internet the entire year.

Notes: Leading Sabres scorer Tyler Ennis, out the last two games with an upper-body injury, could play tonight, Nolan said Monday. … Nolan said also goalie Matt Hackett, who underwent major knee surgery less than a year ago, had swelling after playing the final 40 minutes on Saturday. The Sabres recalled goalie Andrey Makarov on Monday … Nolan on goalie Anders Lindback, who stopped 28 shots Monday: “He was in control, he was in proper position. He looked like a true NHL No. 1 goaltender.” Lindback has a .926 save percentage in 11 appearances with the Sabres. … The Sabres have won only 23 of the last 158 games in regulation, including 12 this season. … The Americans have signed Rochester Institute of Technology forward Matt Garbowsky to an amateur tryout for the rest of the season. The 24-year-old, one of 10 finalists for the Hobey Baker Award, scored 26 goals (tied for third in the NCAA) and a school-record 54 points (tied for fourth) in 40 games this season.

One thought on “Sabres could still finish 29th, lose guarantee of elite prospect”