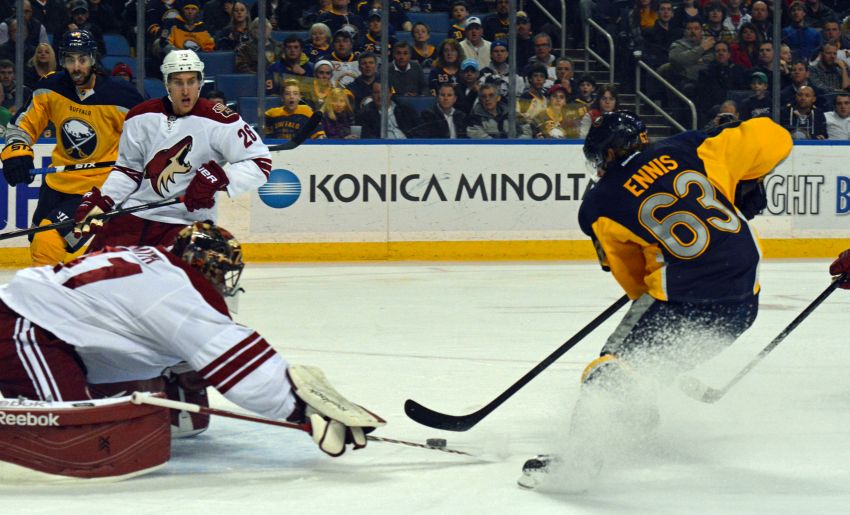 BUFFALO – Sometimes you focus so much on the future, Sabres coach Ted Nolan said, the present can easily be forgotten about.

When the rebuilding Sabres surround Tyler Ennis with better talent in the coming years, the slick winger could become one of the NHL’s elite talents.

But right now, the 25-year-old, who will likely miss tonight’s game with an upper-body injury, is a special player. The former first-round pick is often the Sabres’ only offensive threat.

“I think he’s been having a sensational year,” Nolan said. “In particular, the last 10 games or so, his play has gone up another level. Somebody asked me, ‘What’s the ceiling on this kid?’ I’m not too sure what it is, but it’s going to be magnificent to watch. …

“He’s going to get better and better. When I first got here last year, you could tell what kind of player he was. He got a little bit better. This year, he’s even taken it to another level, so the future looks very, very bright.”

Ennis left Thursday’s 4-3 overtime loss to the Coyotes after the second period. Nolan sounded concerned after game, but Ennis accompanied the Sabres to Colorado, where they play the Avalanche tonight. He could return Monday when they face Arizona again.

Sabres captain Brian Gionta moved up and replaced Ennis on the right wing beside center Johan Larsson and Matt Moulson.

“A lot of people lose sight that he’s still a young player in his career and he’s going to develop and grow into that,” Gionta said about Ennis. “You look at the way he plays, he’s pretty slick. He darts in and out with the puck. He’s pretty elusive. It’s tough to defend.”

The Sabres recalled forward Tim Schaller before they left Friday.

“Maybe 10 minutes too much,” Nolan said.

Expect the 19-year-old rookie to be scratched tonight. Nolan has clearly grown tired of the Russian’s poor work habits.

Sabres goalie Chad Johnson, out since hurting his ankle hours before his scheduled debut March 6, skated Friday and hopes to play again this season.

Johnson, who was acquired March 2 from the New York Islanders, felt a pop in his ankle after facing his last shot that morning.

“It was frustrating,” he said. “I wanted to come here and make an impression and play in games and help this team win. … I knew it wasn’t good.”

Goalie Anders Lindback will start tonight, Nolan said. Matt Hackett, who made 38 saves on Thursday, feels fine. Hackett, less than a year removed from major knee surgery, has been feeling sore after games. He also hurt his arm against Arizona, although he stayed in the game.