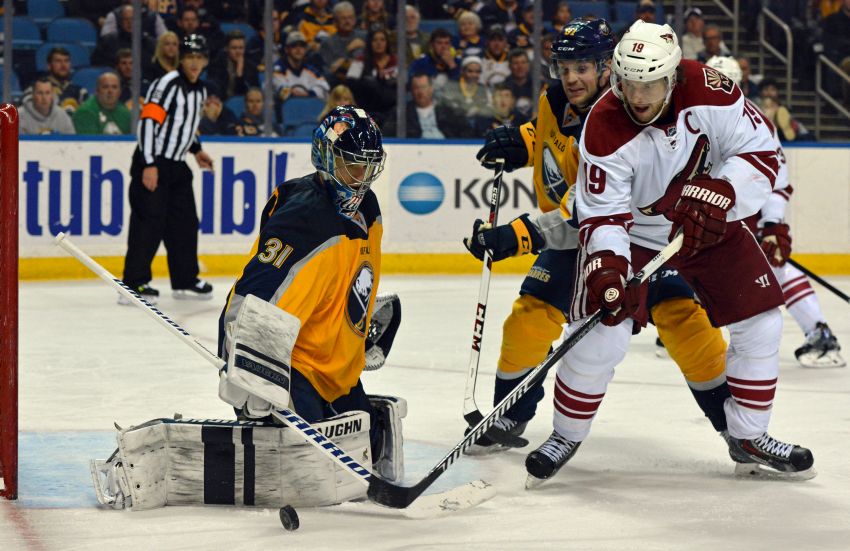 BUFFALO – Mike Weber spoke passionately, like a man who felt jilted. The gritty defenseman had just experienced perhaps the oddest game of his career, the Sabres’ 4-3 overtime loss to the Arizona Coyotes.

The payoff, the prize for all the “suffering” for two seasons had been laid in front of Sabres fans Thursday, creating a bizarre scene inside the First Niagara Center that will likely never be repeated.

A loss to the 29th-ranked Coyotes essentially secured the NHL’s worst team the draft rights to either Connor McDavid or Jack Eichel, the mega-prospects the team’s higher-ups and fan base covets so dearly.

So a loud portion of the fans in the announced sellout crowd of 19,070 – the tankers, as they’ve come to be known – cheered loudly for the opposition, an act that was once the unthinkable.

When Sam Gagner scored 56 seconds into overtime with Weber off for tripping, Sabres fans roared one final time for the Coyotes.

“I’ve always spoken extremely high of our fans,” an emotional Weber said. “I don’t even know if disappointed is the word. They scored the first one, our fans are cheering. Late penalty, they cheer. They cheer when they score to win the game. I don’t even know what to say. It’s extremely frustrating for us.

“We don’t want to be here (in this position). We understand where we are. We understand what this team’s doing, what the organization’s doing, the place we’ve put ourselves in. But I’ve never been a part of something like that where the away team comes into a home building, they’re cheering for them.”

Fans went all-out in their support of the Coyotes, cheering for anything that went against the Sabres. Some even doctored their jerseys or wore special shirts. In section 306, not far from the “Pray for McDavid sign,” a sign featuring a blue and gold tank with “McEichel” written on it was hung up.

Weber, who said he “respects” and “loves” Sabres fans, believes “whatever doesn’t kill you makes you stronger, I guess.”

“But this is a whole new low right now,” he said.

Weber was the frankest of the Sabres. Coach Ted Nolan said he would never complain about the fans.

Sabres winger Cody Hodgson said he couldn’t hear the crowd. Goalie Matt Hackett wouldn’t say what it was like to have the home crowd cheer when he allowed a goal.

Hackett had another busy night. A contest between the NHL’s bottom-feeders was pretty entertaining. The Sabres roared back from two deficits. Captain Brian Gionta tied it with 3:37 left, whistling a shot past Coyotes goalie Mike Smith.

Smith stoned Zach Bogosian in close late in regulation, a three-point save.

The Sabres (48 points) earned a point for reaching overtime, so Arizona’s up six points (54). The Sabres have eight games left, the Coyotes seven.

The teams meet again Monday in Arizona, meaning the Sabres still have an extremely slim chance to catch the Coyotes. The league’s 30th-place team is guaranteed either the first or second pick in the lottery.

For the players, who haven’t quit, that likely means very little.

“We give what we have to give again,” Nolan said. “That’s all we can ask for. It’s no rocket science here what we’re going against.”

Nolan understands why some players would “be a little bit disappointed” by the crowd Thursday.

“They come here and they perform and they work,” he said. “I can see sometimes you get booed when you don’t give an effort, but tonight wasn’t one of those nights.”

Tyler Ennis and Rasmus Ristolainen scored the Sabres’ other goals. An upper-body injury forced Ennis out after the second period. Nolan said his leading goal scorer will be evaluated. Ennis might only be sidelined short-term.

Hackett, who’s still recovering from a knee injury, made 38 saves, building off of his 40-save outing Saturday in Nashville.