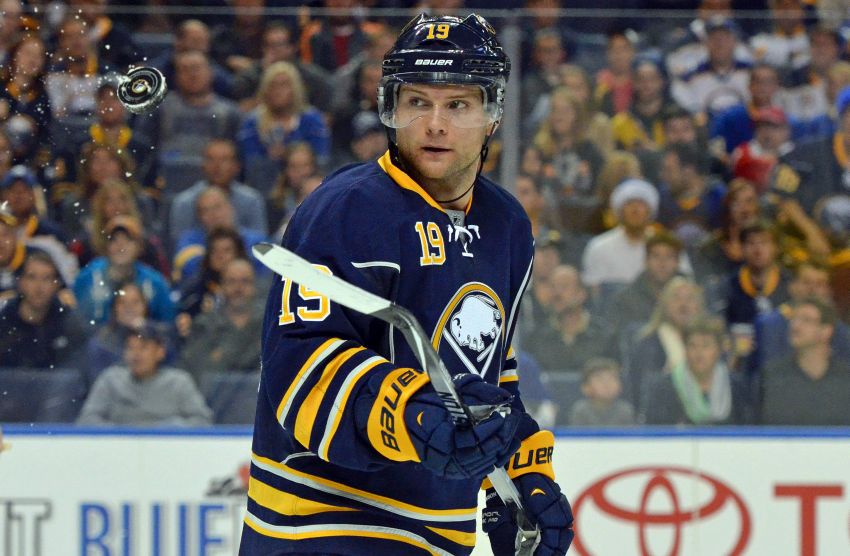 BUFFALO – A year ago, the thought of Cody Hodgson playing anywhere but center would have seemed absurd.

The Sabres had few viable options down the middle. Tyler Ennis was still bouncing between two forward spots. Zemgus Girgensons was just beginning his NHL career as a winger.

Besides, Hodgson had just signed a six-year, $25.5 million contract extension to be the No. 1 pivot.

But late in the season, following an evaluation period, the team’s new regime mapped out the future. Ennis had settled in nicely at center under coach Ted Nolan. Girgensons, Nolan and general manager Tim Murray decided, would be a better long-term fit in the middle.

So they shifted Hodgson, a center his entire career, to left wing.

This season, Hodgson’s a permanent winger.

“I see it as an opportunity,” Hodgson said Friday inside the First Niagara Center. “We have a lot of good players on this team, especially offensively. It’s nice to be able to contribute in whatever way I can. Left wing, I felt real comfortable.”

He skated beside slick rookie center Sam Reinhart and Brian Gionta during Thursday’s 3-1 season-opening loss to Columbus. Hodgson nearly generated a couple of goals, but he held the puck on a two-on-one break and was stymied when Reinhart dished to him in the slot.

“If I would’ve scored, Samson would’ve had a pretty good debut night with a couple points,” Hodgson said after the Sabres prepared for tonight’s game in Chicago against the Blackhawks. “I thought it was a pretty good combination.”

Clearly, playing left wing frees Hodgson up offensively. With fewer defensively responsibilities, he often breaks loose. Teammates have consistently hit him with long passes down the side.

“You start to take off, catch defenses sometimes,” said Hodgson, who had 20 goals, 44 points and a minus-26 rating last season. “The last game I did that a couple times where the defense didn’t really expect you to break and you’re gone.”

Hodgson, who’s struggled defensively for years, can’t ignore that side of the game, Nolan said.

What’s his expectation for Hodgson this season?

There aren’t many right-handed shots that play left wing. Hodgson used to center one of the best, former Sabres star Thomas Vanek.

“Always open, always in position to score,” Hodgson said about Vanek. “That’s something I can really take away from him. I’m still learning. I’m trying to get better at the position, but I definitely need to remember what Thomas did to create offense, because he was so good at it.”

Sabres forward Cody McCormick missed Friday’s practice for a maintenance day but could play tonight. McCormick was to be evaluated before the Sabres flew to Chicago, Nolan said.

Brian Flynn would likely replace him.

Nolan on the Sabres’ sloppy effort Thursday: “I thought about it all night the way our team played the way they did, and this is a competitive group, they really are. It was almost like one of those deer-in-the-headlights look. We were dry. We didn’t have no jump. Hopefully, this is just one of those jittery type of games. We get it out of our system, we move forward.”

The Sabres had trouble simply exiting their zone.

Nolan on flipping Girgensons and Reinhart, who practiced Friday between big wingers Marcus Foligno and Chris Stewart, his linemates much of training camp: “Just maybe give the young kid a little bit more safety … with those two guys and get Gionta and Cody some speed in the middle.”