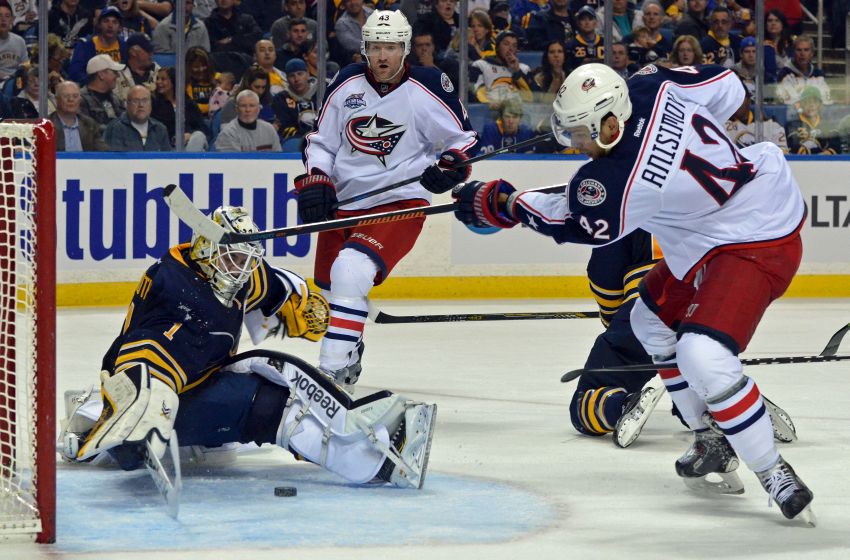 BUFFALO – At some point Thursday, as the Columbus Blue Jackets kept peppering shots on him, goalie Jhonas Enroth probably thought the new version of the Sabres looked a lot like the old one.

Like so many times last season, the Sabres performed like an ugly, disjointed mess for stretches, running around in their own zone as their opponent throttled them.

Some nice goaltending from Enroth kept the Sabres in their 44th season opener, but two third-period goals helped the Blue Jackets win 3-1 before 18,215 fans inside the First Niagara Center.

“We don’t want to go through that season we had last year,” Enroth said about the Sabres’ 30th-place finish in 2013-14. “We want to win more games. We don’t really care who’s getting drafted next year. We want to win every game.”

“I think it was OK at best,” he said. “I don’t know what it was. I think guys really wanted to do it. Maybe there’s just too much jitters about the home opener, there’s too much hype about it.”

With the game tied at 1 midway through the third period, captain Brian Gionta was whistled for hooking in the offensive zone with the Sabres enjoying their only power play. Cam Atkinson scored on the ensuing power play at 12:45. Artem Anisimov sealed the game at 17:34.

Enroth added: “If we keep battling as hard, we just make a little smarter plays, I think we’re going to be fine.”

The Sabres hardly deserved to win this one, though. The Blue Jackets pumped 40 shots – 12 in the first and second periods and 16 in third – on Enroth, one of the Sabres’ lone bright spots. They also hit four posts early.

“I thought Jhony played great in net, gave us a chance to steal one there,” Gionta said.

Enroth, who dazzled during the preseason, looked sharp from the get-go, stopping the first 20 shots in his first start as the No. 1 goalie.

“I’ve been feeling pretty well during camp, just trying to keep building on my camp,” the 26-year-old Swede said.

Still, the Sabres couldn’t feed off Enroth or a highlight-reel goal from Zemgus Girgensons.

“Definitely, I think the D-zone was the first thing that was off today, the communication back there,” Girgensons said. “That probably cost us the game today. … Maybe the hype for the game was too high and that got us off a bit.”

After Jack Skille opened the scoring 13:21 into the second period, Girgensons tied it at 14:42, torching Alexander Wennberg high in the slot before beating goalie Sergei Bobrovsky in close as he fell.

“It was a great move, a great play,” Gionta said. “Even to finish it off, he had a guy all over him.”

Meanwhile, in his NHL debut, slick Sabres center Sam Reinhart skated 13 minutes, 37 seconds over 17 shifts between Gionta and Cody Hodgson. The No. 2 pick in June had zero shots and only played at even strength.

Buffalo’s top prospect said his confidence got higher as the game went on.

What was the biggest difference between the regular season and the preseason?

“Just the pace of play,” Reinhart said. “It’s certainly a little bit different from the preseason.”

The Sabres have nine games to evaluate Reinhart before his entry-level contract kicks in. Reinhart will keep playing for now, Nolan said.

“He was OK for an 18-year-old kid jumping in against a team like Columbus … a good team,” Nolan said.

In the first period, after Skille knocked Reinhart down, teammate Mike Weber went after Skille and nearly fought Jared Bolle.

“To see somebody do that for you is good,” Reinhart said.