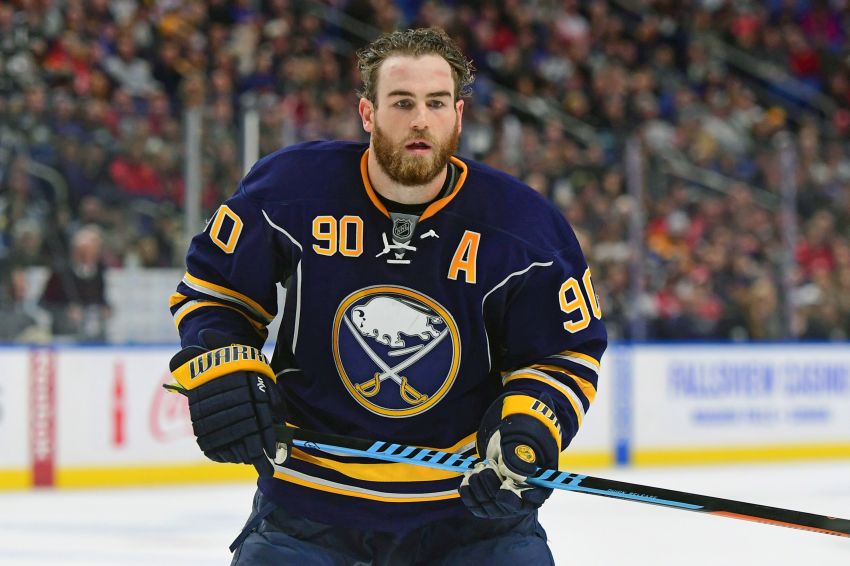 BUFFALO – In his eight-year NHL career, Ryan O’Reilly has scored 117 times, so the Sabres center has about every type of goal on his impressive resume.

But after O’Reilly recently lost his helmet in the thick of the action and nearly scored, he started thinking – or, perhaps more appropriately, daydreaming – about getting a goal and celebrating without, as hockey players say, his “bucket.”

“We talked about this like two weeks ago,” O’Reilly told the Times Herald on Tuesday in Ottawa. “How sick would it be to score a goal with no bucket on, come through the train (glove taps along the bench) with the guys?”

Sure enough, O’Reilly’s helmet fell off again early in the Sabres’ 5-4 win against the Senators, exposing his brown hair.

“He was pushing to get a goal without the bucket on,” coach Dan Bylsma said Wednesday after the Sabres prepared for tonight’s home tilt against the New York Rangers at KeyBank Center.

Who was the last Sabre to score after losing his helmet? No one seems to remember. Clark Gillies was the team’s last helmetless player in the late 1980s.

“It’s funny the way it works out,” said O’Reilly, who slicked his hair back a bit with his glove before his teammates congratulated him. “I’ll have to get a picture of that.”

Forget about a picture, Bylsma joked he wants O’Reilly, 25, to permanently ditch his helmet.

“He should get the old Craig MacTavish exemption and play without the bucket full time,” Bylsma said of the NHL’s last helmetless player, who retired in 1997.

Kidding aside, O’Reilly’s first goal since Nov. 1 – an oblique injury sidelined him six games last month – was huge for his confidence. He also scored the winning goal early in the third period and created Jack Eichel’s power-play goal with a nifty feed.

O’Reilly, like most of his teammates, has struggled offensively at times this season. The Sabres have scored a league-low 43 goals, just 1.96 a game.

Yes, O’Reilly’s six goals and 12 points are both tied for second on the Sabres. But he compiled two goals and four points, one-third of his offense, Oct. 16 in Edmonton.

So take away that game and Tuesday’s, and O’Reilly has two goals and five points in his 14 other appearances.

O’Reilly had 21 goals and 60 points in 71 games last season, numbers that helped him earn a spot in the NHL All-Star Game.

Of course, O’Reilly is notoriously hard on himself, even in good times. The team’s scoring woes, Bylsma said, made him heap more pressure on himself.

O’Reilly, however, has already relaxed a little with Eichel back after a high left ankle sprain sidelined him 21 games. Now someone else can help carry the offensive load.

“He took a lot of pressure on himself in his game,” Bylsma said. “I think even going back to Sunday (in practice) some of that pressure was relieved by having Jack back on the ice with us. I think you saw it last night in the game.”

“I feel like we’re seeing different pairing a little bit more, which is definitely nice,” O’Reilly said Wednesday. “When you get the same pairings, you don’t score, it can be frustrating and tough to generate.”

Six frustrating weeks sapped some of O’Reilly’s confidence, so he sought advice his father, Brian, something he regularly does whenever a slump arrives.

With his father’s help, O’Reilly decided to simplify his game.

“I was still getting nice opportunities, I just wasn’t burying them, and … I lost some confidence,” he said. “I wasn’t sure of myself once I was in those opportunities.”

“If it’s scoring a goal, if it’s making a good pass, just stay in the moment and do whatever I can in that situation. … Once I kind of got back to that, I seemed to get a few more bounces my way.”