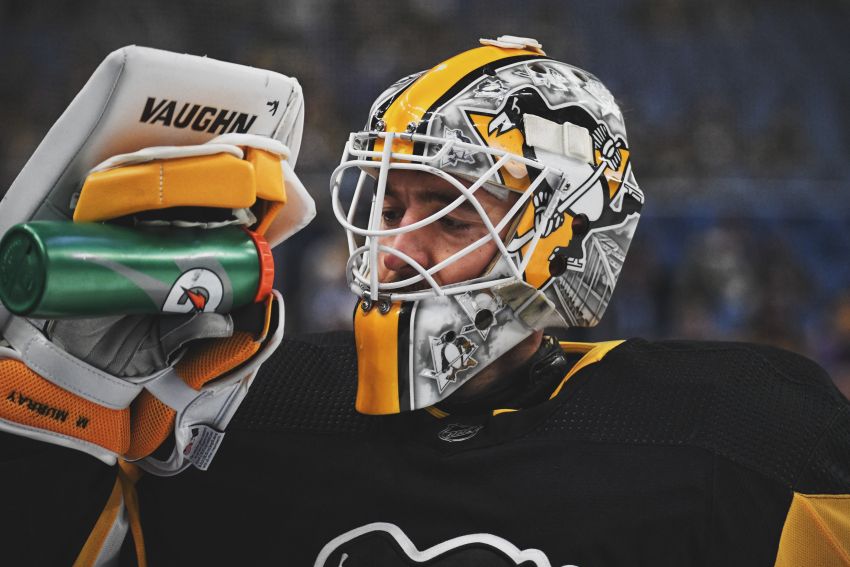 MONTREAL – The Buffalo Sabres must keep looking for another goalie.

A potential deal between the Sabres and Ottawa Senators involving Matt Murray was nixed because Buffalo is on the goalie’s 10-team no-trade list, according to Sportsnet’s Elliotte Friedman.

The Senators would’ve retained some of Murray’s salary and given the Sabres the seventh overall pick in tonight’s NHL Draft in exchange for the 16th selection, according to TSN’s Darren Dreger.

“The reality is we worked hard on a deal but players have the ability when it’s in their contract to make those decisions, and we want players who want to be here,” Sabres general manager Kevyn Adams said Thursday after the first round round ended inside the Bell Centre.

Murray, 28, has two seasons left on his four-year, $25 million contract. He has a base salary of $7 million this season, according to capfriendly.com.

While he backstopped the Pittsburgh Penguins to Stanley Cup championships in 2016 and 2017, Murray has struggled in recent years, posting save percentages under .900 in 2019-20 and 2020-21. Last season, the Senators briefly sent him to the minors.

Murray also has a history of concussions, having suffered a season-ending one March 4 when teammate Nikita Zaitsev crashed into him and two in an eight-month span in 2018.

The Sabres have $34,054,166 of projected salary cap space, according to capfriendly.com, so Adams has the ability to take on another team’s “bad” contract and receive an asset.

Murray played for Sabres assistant coach Mike Bales, who’s in charge of Buffalo’s netminders, when he was Pittsburgh’s goalie coach.

Last year, after goalies Carter Hutton and Linus Ullmark left when free agency opened, the Sabres signed Anderson and goalie Aaron Dell to one-year deals late in the day. Dell, who played 12 games for the Sabres, is also an unrestricted free agent.

In addition to Luukkonen, who played nine NHL games last season, the Sabres have Northeastern’s Devon Levi, the NCAA’s top goalie goalie in 2021-22, in the pipeline.

Adams has made it clear he won’t overpay for any stopgap solutions. If the Sabres can’t find a goalie to their liking, perhaps Luukkonen could start this season in the NHL.

“We’ll be in different conversations, for sure,” Adams said of acquiring another goalie. “I think we feel that anything we do we want to do it being smart and making sure that we’re planning how we’re building out a roster. But we’ve done the work. …

“A big piece of this was Craig Anderson believing in the team he has in front of him, that he can come back, he’s feeling good, he’s healthy, and where we feel UPL is at his development. I had a good meeting with his agent today just to talk about that, where he’s projecting down the road.”

The Sabres hope Kisakov, a second-round pick in 2021, 53rd overall, can attend development camp next week. The Russian, 19, is going through the visa process, Adams said.

Prior to the draft, NHL commissioner Gary Bettman asked for a moment of silence to honor San Jose Sharks scout and former NHL defenseman Bryan Marchment, who passed away suddenly Wednesday.

Fans booed Bettman mercilessly, a draft tradition, during his other comments.

Canadiens coach Martin St. Louis, an undrafted Hall of Famer, received a rousing ovation when he walked out on stage before the draft started.

“It took me 47 years to finally be at my first draft,” he told the crowd. “And it was worth the wait.”

Notes: Adams said the Sabres tried to move up from the ninth pick. “We talked to every team and had gone through different scenarios,” he said. “But you realize that it’s very rare when teams move top picks.”… Adams said the Sabres plan to give qualifying offers to Brandon Biro, Brett Murray and Arttu Ruotsalainen, their restricted free agent forwards. … The Sabres have eight picks today during the final six rounds.