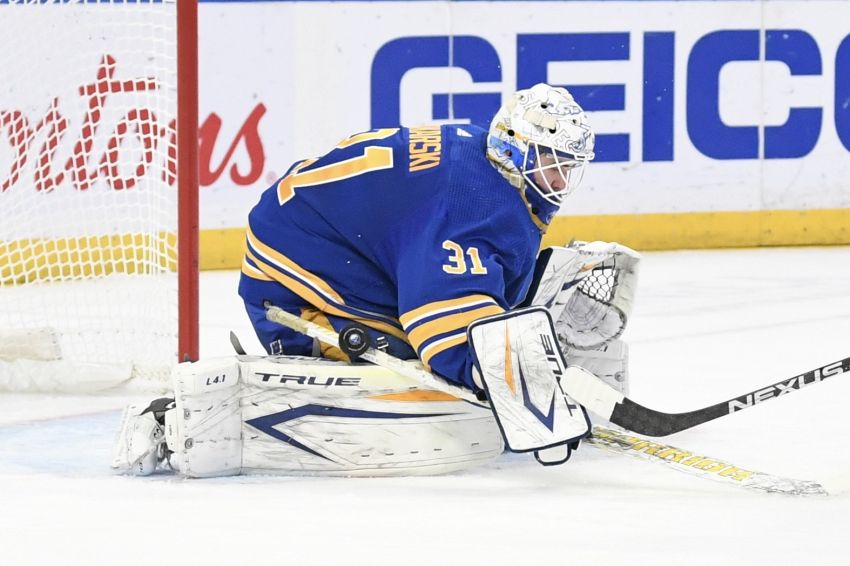 BUFFALO – Dustin Tokarski has accomplished something unusual. Goalies in their 30s more than four seasons removed from their last NHL game rarely return to the big leagues.

Tokarski, 32, not only made it back, he has stuck with the Sabres for more than a year.

Since relieving an injured Carter Hutton on March 22, 2021, Tokarski has played 35 games, including a career-high 22 this season. In his first 11 pro seasons, he made 34 NHL appearances.

Tokarski, a decorated AHL netminder, has given the Sabres a sturdy backup coach Don Granato trusts enough to utilize against any opponent.

In his last three outings, Tokarski has performed splendidly, compiling a 1-1-1 record with a 1.28 goals-against average, a .957 save percentage and one shutout.

Tokarski made 37 saves in Friday’s 4-3 shootout loss to the Washington Capitals. He stopped 24 shots on March 18 in a 1-0 overtime road win against the Calgary Flames, earning his second NHL shutout.

He will likely start again during the Sabres’ two-game road trip, either tonight against the New York Rangers or Monday versus the Chicago Blackhawks.

“He’s really been in the zone the last couple, let’s face it,” Granato said following Saturday’s practice at LECOM Harborcenter. “Calgary he was outstanding.”

Tokarski will achieve a first this season. Since turning pro in 2009, he has never spent an entire season in the NHL from start to finish.

Even when Tokarski backed up Carey Price with the Montreal Canadiens throughout the 2014-15 campaign, he played two games in the minors on a conditioning assignment.

“It shows if you put the work in, you do the right things, you’re gonna have success eventually,” Sabres winger Peyton Krebs said of Tokarski staying in the NHL all season. “Obviously, goalies, they have a little bit … slower trajectory when they’re gonna make it. But for him that’s an awesome accomplishment. He’s been a great guy to me.”

Tokarski, who missed 21 games in the middle of the season while recovering from COVID-19, said this year has been “awesome” and “crazy.”

“Just being a part of this group is a lot of fun,” Tokarski said. “Some ups and downs, out for a bit with COVID. But it’s a fun group, fun coming to the rink every day. I’m just enjoying it.”

Still, recovering from his lingering COVID issues was difficult. After playing Nov. 29, he did not return until Jan. 30.

“He has gone through lots of ups and down this year … medically,” Granato said.

Tokarski finally found a groove again earlier this month. His diving glove stop on Calgary’s Calle Jarnkrok’s ranks as one of the best saves in the NHL this season.

But Tokarski hasn’t been forced to make many crazy saves. The Sabres have consistently been showcasing more structure, helping Tokarski and No. 1 goalie Craig Anderson.

“I can’t say enough about (Tokarski), but our team helping around (him), like they’re giving our goaltenders consistent shot selection so it’s easier for them to read what’s happening in a game, even read breakdowns,” Granato said. “The breakdown is more consistent, as odd as that sounds. But when you’re playing consistent, they read, ‘Oh, there’s going to be a hiccup here, I can feel it.’ And they’re ready for it.

“And Ticker’s done a nice, nice job every day to kind of mesh in with his teammates, and I think he feeds off of that as well. He feels, I think, that the guys embrace him.”

“In practice, you can see he’s one of the last guys out there,” Krebs said. “Just works his brain out and battles hard. You see that as a goalie, you respect it.”

On Saturday morning, Sabres winger Alex Tuch, who has scored just once in the last 18 games, an empty-netter, expressed his disappointment to Granato.

“I said, ‘Tucher, you won us a game the other night,’” Granato said of Tuch’s shootout goal in Wednesday’s 4-3 win over the Pittsburgh Penguins. “He won us a game in the shootout. Doesn’t count as a goal in the (statistics) but what a goal to win in a shootout.

So far, Tuch, 25, has produced eight goals and 26 points in his first 33 games with the Sabres.

“By nature, he presses,” Granato said. “That’s a dynamic within him that’s made him great and also he has to work with and around.”

During Friday’s loss, Granato moved Tuch to right wing beside Krebs, who switched to center, and Vinnie Hinostroza. On Saturday, Tuch was back beside center Tage Thompson and Jeff Skinner.

Granato said he expects center Cody Eakin and defenseman Colin Miller, both of whom missed Saturday’s practice for maintenance, to play against the Rangers.

He said he will likely dress the same 18 skaters as Friday’s game.

Update: The Sabres have placed Miller in the NHL’s COVID-19 protocol.