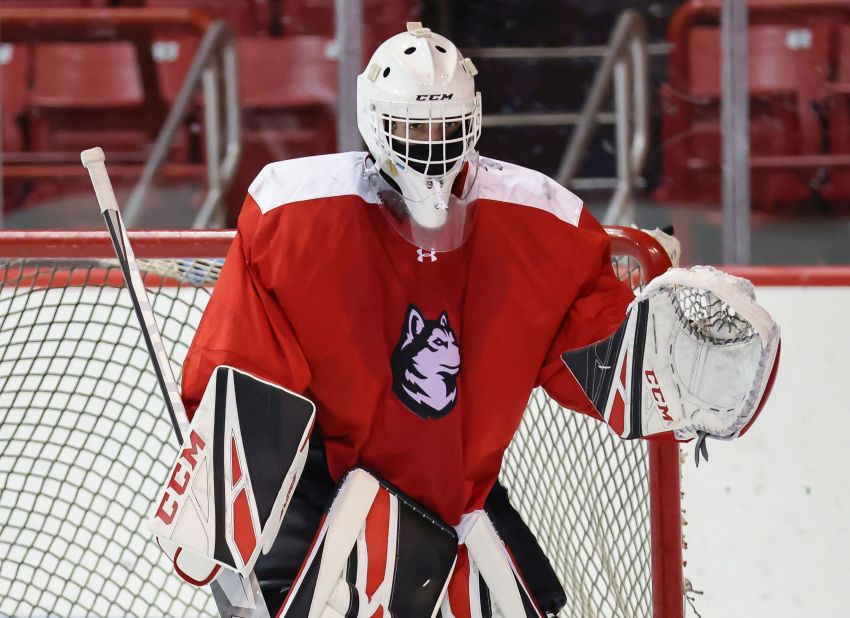 It was in late August, the first day Northeastern could gather to prepare for its new season, when Mike Condon learned about the work ethic goalie Devon Levi possesses.

On that day, the team couldn’t skate yet. But Levi, one of the Buffalo Sabres’ top prospects, was hankering to face some shots. So the sophomore put on his full gear and went outside Matthews Arena in Boston into the late-summer heat.

“He was going out in the gravel outside the rink and having people shoot pucks at him,” Condon, the Huskies’ new goalie coach, told the Times Herald. “I was like, ‘This guy’s taking it a little to the extreme but I like it, though.’”

The tenacity with which Levi, who turns 20 on Monday, approaches hockey has helped him morph into one of college hockey’s elite goalies. Just 18 games into his NCAA career – a rib injury prevented him from playing as a freshman – he has emerged as a top Hobey Baker Award candidate.

Levi, who has played every minute of every game, posted back-to-back shutouts in his first two NCAA appearances. His eye-popping statistics stand at or near the top of every major goaltending category. His six shutouts and .953 save percentage rank first in the NCAA, while his 13 wins and 1.33 goals-against average are third.

“I expected myself to come in and help the team win … and I don’t think this is personal success, this is team success,” Levi told the Times Herald.

“We were expecting him to be dialed in right away,” Northeastern coach Jerry Keefe told the Times Herald. “We know how talented he is. So, yeah, it’s not an easy jump. Basically, he’s a freshman when you really think about it, because he hadn’t played college hockey yet.

“But you know what? He’s that talented and he prepares so well. He wants to be good, there’s no doubt. His preparation, it’s off the charts, it really is. This kid is as focused as anyone I’ve seen.”

Keefe plans to ride the 6-foot, 190-pound Levi as long as he can, meaning he could end up starting every game this season.

“As long as he’s feeling good and he’s mentally and physically feels good about his game, then, yeah, absolutely we’ll keep riding him, for sure,” Keefe.

That means Levi has been learning to dial back his on-ice work and pace himself.

“The one fault of him is you’ve got to watch his workload,” Keefe said. “He never wants to stop. He’s down at the rink so much, he wants to go on the ice a lot. You got to be careful, it’s almost like, ‘Dev, settle down, you need to get some rest.’”

Having pushed so hard throughout his career, Levi acknowledged “it definitely took some convincing” to slow down and conserve energy for games.

The extra ice time generated confidence. The repetition built muscle memory and eliminated thinking. He could trust the work he put in during the week.

So it took time for Levi, who was acquired July 24 from the Florida Panthers, to adjust.

“In junior hockey, I was always just going, going, going trying to find ways to get better,” Levi said. “To staying out on the ice as long as I could, staying out for extra ice. I felt like I was getting better and it was super beneficial. I did realize by the end of the year I was pretty tired, but it was something that I just was pushing through.”

Northeastern’s schedule is loaded with back-to-back games. Levi likely couldn’t handle that heavy workload over a full season if he consistently put in extra on-ice work.

“My goalie coach and I have sort of been making plans every week on how to be extremely efficient and not kill myself in practice, because if no one’s telling me to get off the ice, I probably won’t,” Levi said.

Clearly, Levi, who backstopped Team Canada to a silver medal at last year’s World Junior Championship, has maintained strong energy levels during games. He now tries to use practice for fine-tuning and working on the technical side.

“And it’s not like I’m spending that much less time on the ice,” Levi said. “An extra half hour, 15 minutes every day, they do pile up.”

Condon said the hardest thing has been telling Levi to go home, focus on his studies and be a college student.

“He’s always talking either to myself, talking to Seamus Kotyk (Buffalo’s goaltending development coach) or he’s talking to a sports psychology guy. So the main motivation right now is just (saying), ‘This is our practice plan, this is what we’re going to do. You don’t need to do anything else other than this. When you leave the rink, you leave the rink so you don’t get burnt out and go be a regular college kid and enjoy your time.”

Condon said Levi “has a genuine affection for the position.”

“It’s really fun to work … when a guy who really wants to leave no stone unturned to his preparation,” Condon said. “I’ll walk in the weight room, he’s got these Oculus goggles on making saves on the virtual reality. I’ll just kind of laugh to myself.”