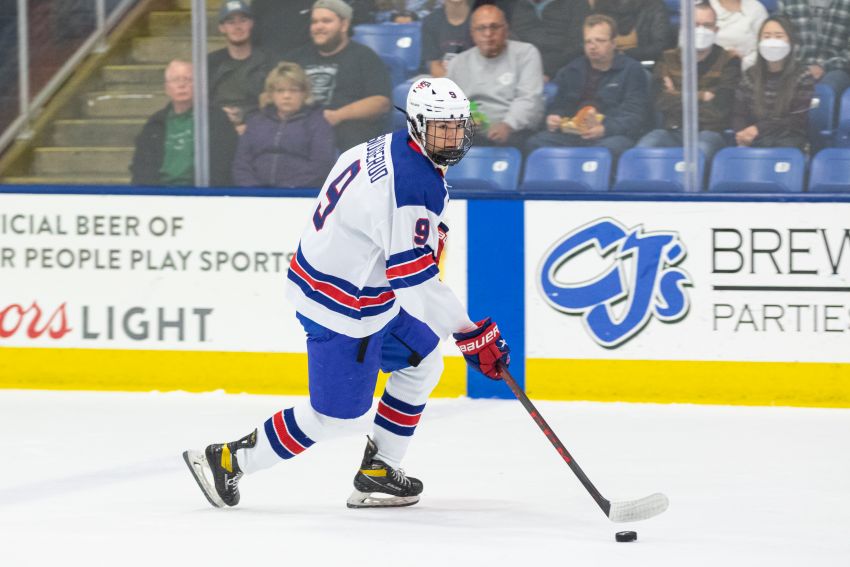 MONTREAL – Nick Fohr looked down the ice that day early in the 2020-21 season and had no idea who was shooting pucks at the other end.

“I’m like, ‘What is that down there?’” recalled Fohr, then an assistant coach at the U.S. National Team Development Program.

The mechanics – the compact, quick release – looked familiar, just like Auston Matthews, a phenom he had coached years earlier.

“I had to go down there to figure out who it was,” Fohr told the Times Herald.

He skated down the ice and saw winger Jimmy Snuggerud, a youngster who had just joined the program for his under-17 season.

Of course, Fohr doesn’t want to compare Snuggerud, an NHL Draft prospect, to Matthews, a superstar who recently completed a dynamic 60-goal season.

Still, among his array of skills, Snuggerud possesses what Fohr called an “elite” shot.

Snuggerud, 18, has worked hard to hone his shot – “It comes from practicing every day,” he said at the NHL Scouting Combine last month in Buffalo – and evolve as a player.

Snuggerud, the son of former Sabres forward Dave Snuggerud, enjoyed a breakout season in 2021-22. In scoring 24 goals and 63 points in 59 games for the U.S. Under-18 team, his draft stock skyrocketed, and he could be picked during Thursday’s first round.

NHL Central Scouting ranked Snuggerud 11th among North American skaters for the draft. The Sabres pick three times Thursday: ninth, 16th and 28th. Snuggerud could be an intriguing selection with one of their final two picks.

“His skating struggled a bit because he wasn’t a super athletic kid,” Fohr said. “His skating was a little rough around the edges. I remember having the NHL guys come to me like, ‘Boy, this Snuggerud kid, if his skating doesn’t get better, he’s going to struggle, it’s going to be hard for him.’”

So Snuggerud focused on improving his athleticism – “Learning how to look better off the ice,” Fohr said – and reaped the benefits on the ice.

“He was by far our most improved player from Day One to the final game,” Fohr said.

Fohr said scouts “don’t even bring up his skating anymore.”

“Once he got more efficient at moving his body and utilizing his core muscles and core strength better, he became a lot better and a lot more effective hockey player,” he said.

Snuggerud will play college hockey at Minnesota next season, choosing to continue a family tradition.

When Snuggerud began looking at colleges, his father wanted him to explore for himself.

The family ties to the university run deep.

But Dave Snuggerud knew it was important for Jimmy, who grew up in Minnesota outside the Twin Cities, to make his own decision as an adult.

“I’ve never wanted Jimmy to be in the shadow of Dave Snuggerud, just like my other kids,” Dave Snuggerud told the Times Herald last month. “You go out – it sounds silly – and pave your own path because this is your gig. I enjoyed my path, I loved it, I can share stories about it.”

So Jimmy talked to coaches and learned about different schools and the opportunities he could enjoy.

“Ultimately, he called me one afternoon and said, ‘Hey, dad, I got offered a scholarship to the Minnesota. I want to go there,’” Dave Snuggerud said.

Dave Snuggerud was thrilled and told his son, “Wonderful, I’m very happy if that’s what you want you want to do.”

“He always let me know it’s my decision in life where I go to college,” said Jimmy, who liked the atmosphere at Minnesota and the bevy of talent he can practice against each day. “Not having them pressure me is something that I enjoyed and they left it up to me.”