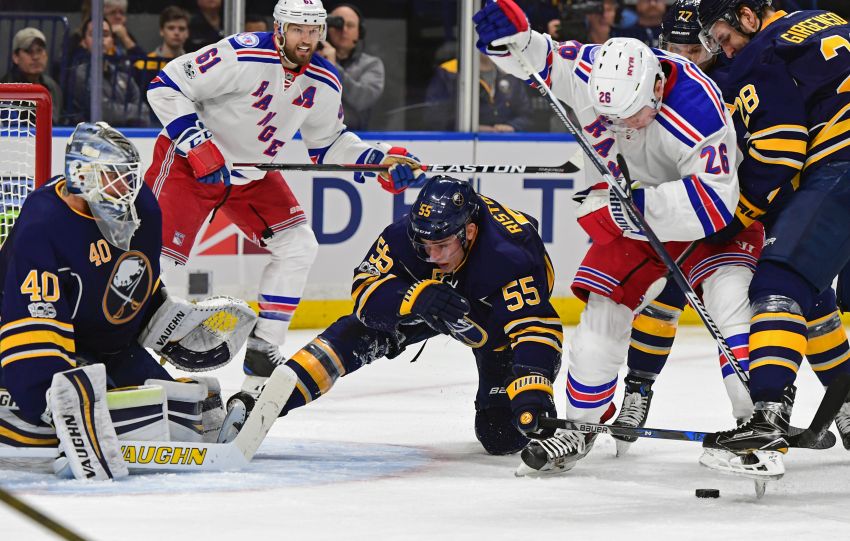 BUFFALO – The scoreboard read zero goals, but in reality, the Sabres could’ve had five or six by late in the third period of Thursday’s 2-1 overtime loss to the New York Rangers.

The Sabres, studs at home in recent weeks, zoomed around Rangers goalie Henrik Lundqvist all night, generating chance after chance. But with six minutes left in regulation and their shot total approaching 40, the Sabres hadn’t scored yet.

Finally, Sabres defenseman Cody Franson tied it at 14:29, beating Lundqvist after the puck squirted to him in the slot. Franson, who said he has been dealing with a family issue, then raised his arms and yelled emotionally as his teammates congratulated him.

At that point, it seemed like the Sabres had seized the momentum, and sure enough, they nearly won it twice in overtime.

Lundqvist first stymied Kyle Okposo after Jack Eichel fed him in front. Evander Kane followed up by rattling one off the post.

“He zinged it by him,” Sabres coach Dan Bylsma said. “I was just kind of hoping … we can get a bounce off the post and in from that one.”

For a low-scoring affair, Tuesday’s game before a bipartisan crowd of 18,941 fans inside KeyBank Center featured loads of action – the Rangers outshot the Sabres 44-37 – and terrific goaltending.

“This was a great hockey game,” Rangers coach Alain Vigneault said. “You had everything you needed in a hockey game. Great goaltending. Scoring chances on both sides. Two teams working extremely hard for every inch that was available out there.”

Lehner said: “It was an entertaining game. It was a fun game to play in.”

But while the Sabres earned their 50th point and moved up to sixth place in the Atlantic Division, they lost their third straight game.

Within the next 15 games, a stretch in which the Sabres play at home another 10 times, they must rattle off a string of victories – probably at least five or six in a row – if they truly want to contend for playoff spot.

Time is running out for the club to make a run. Thursday’s loss ended a four-game home winning streak.

Franson said: “We did a lot of good things in this game. I thought this was a pretty good bounce-back game for us. … We paid attention to what made us play the way we did in Montreal, and I thought we responded pretty well.”

The Sabres responded well after defenseman Zach Bogosian left the game with a mid-body injury shortly after Jimmy Vesey hit him into the boards late in the first period.

“He tried to play at least one or two shifts after he got injured,” Bylsma said.