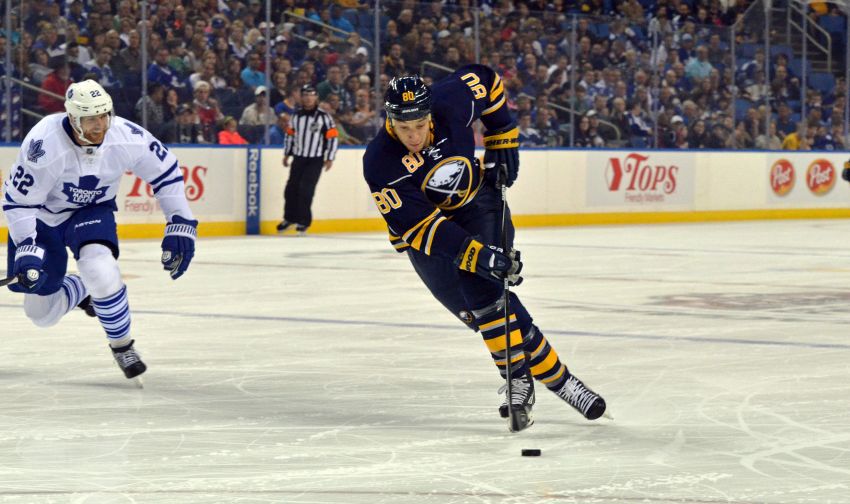 BUFFALO – If this keeps up, the battle to become the Sabres’ No. 1 goalie could be over soon.

Michal Neuvirth performed poorly in his first preseason action, making only 16 saves in the Sabres’ 6-4 loss to the Toronto Maple Leafs on Friday inside the First Niagara Center.

The Leafs scored on four of their first seven shots and five of the first 12.

“A tough game, not a lot of shots,” Neuvirth said. “It seemed like every time they had a shot it ended up in our net. I just couldn’t get in the game to make a big save.”

Neuvirth hadn’t played since injuring his hip March 13. He’s competing with Jhonas Enroth for the starting goaltending job. Enroth had a 35-save shutout Tuesday.

“No one’s going to remember this game,” Neuvirth said. “I need to get better.”

Sabres coach Ted Nolan added: “He was OK, but he can be a lot better.”

The longtime rivals played an entertaining contest before a bipartisan crowd of 18,942 fans.

“Chris Stewart was definitely one of those guys you said, ‘Whoa, that was a good game,’” Nolan said.

Stewart added: “I don’t want to say it’s a huge step, but it’s definitely a step in the right direction. I think my timing’s starting to come back on the ice.”

In other news, Sabres rookie Sam Reinhart, the No. 2 pick in June, played his best game this preseason, Nolan said. The center was pointless in 16 minutes, 46 seconds. Reinhart mostly played between Cody Hodgson and Brian Gionta.

“He’s a little bit more engaged,” Nolan said about Reinhart. “You almost feel like he’s getting a little bit more comfortable. Special players like that, they just don’t jump in and do things all of a sudden. They analyze a little bit. So he’s been analyzing for the last little while. Now he’s ready to take that next step.”

Nolan knew very little about Sabres prospect Tim Schaller prior to training camp. The center hasn’t dazzled the coach, but his play away from the puck has been catching Nolan’s eye.

“I just thought his hockey intelligence was evident to a few of us,” Nolan said Friday morning. “He kept doing it day after day after day. We just felt that he deserves an opportunity.”

“This is a dream come true,” Schaller said Friday morning. “I’ve been waiting for this my whole life. It’s a preseason game, but it’s a tryout for me. I was waiting for this all last year, didn’t get it. Now it’s my time to shine tonight. I’ll bring my A game, that’s for sure.”

“It was just something that I had to take care of all season,” Foligno said Friday morning. “I had to tape up my shoulders. That just kind of hindered. When you hit someone, it would hurt a lot. I just wanted to get that pain out of there. That pain is tough to play with.”

Foligno spent some of the offseason in a sling. He said he’s back to normal following some tough rehab.

The former Sabres defenseman Henrik Tallinder, an invite to Toronto’s camp, dislocated his left shoulder when Mike Weber knocked him into end boards during the second period.

Former Sabres coach Ron Rolston was in the press box scouting for Arizona.