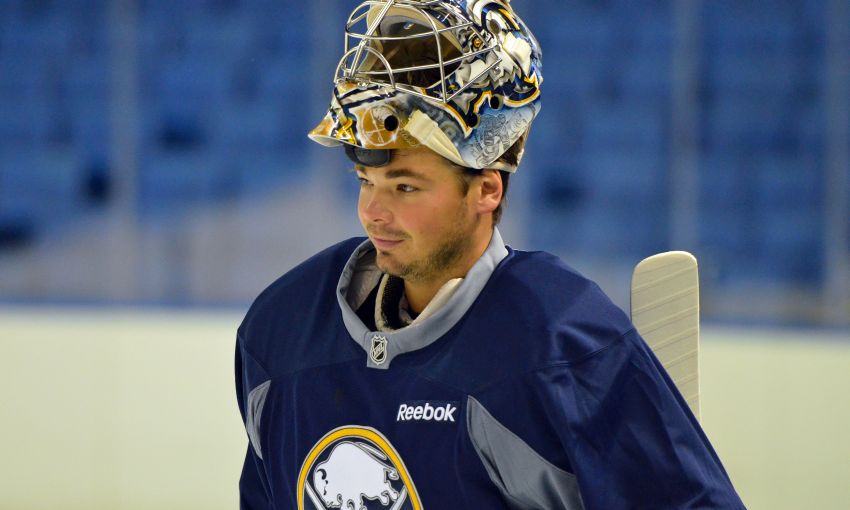 BUFFALO – They’ve been friends for years. Sabres goalies Jhonas Enroth and Michal Neuvirth grew up facing each other overseas. When their careers shifted to North America, they kept competing all the way to the NHL.

These days, the 26-year-olds are challenging for the same spot, the No. 1 goalie position.

The competition should be a friendly one. The two have become close since Neuvirth arrived from the Capitals in March. Neuvirth recently texted Enroth right away after arriving in Buffalo. They even drove to the doctor together for checkups late last season.

“We kind of bonded a little bit getting hurt,” Enroth said. “So we’re good friends.”

Those season-ending injuries – Enroth sprained his MCL and Neuvirth hurt his hip in his second Buffalo start – delayed their battle to replace franchise goalie Ryan Miller, the former Vezina Trophy winner the Sabres traded in February.

“Both these guys are trying to help the Buffalo Sabres team,” he said. “It’s not their personal stats. It’s not, ‘I’m better than you.’ It’s, ‘Let’s be better together,’ and, ‘If you take that spot for the first little while, I’m going to be right on your behind to try to get it from you.’

“Hopefully, it’s a nice, healthy relationship with a healthy competition, because there’s nothing better.”

Nolan plans to give the netminders full games and alternate them during the six-game exhibition slate.

It’s possible only one goalie will stick here past this season. Both are unrestricted free agents.

Neuvirth, Washington’s starter much of 2010-11, has played 136 NHL games. Enroth, meanwhile, has made only 81 appearances.

Still, Enroth, Miller’s backup for three years, has showcased glimpses of being a top netminder over the years. The Swede has made it no secret he believes he’s ready to be a starting goalie.

“You always want to be the guy,” said Enroth, who won only four of his career-high 28 appearances last season. “Obviously, I haven’t really been the guy on this level yet. But when I was a guy in the American League and back home, I found I really enjoyed it. That’s what I’ve been working for my whole career. Sure, it’s a different mindset.”

But when Miller was here, Enroth said he couldn’t think of himself as the starter.

“I see myself as a little bit more the potential starter,” he said. “When Ryan was here, it wasn’t really the same thing. You knew he was going to be the guy.”

Nolan believes the diminutive Enroth can become the guy. Playing behind Miller and sitting next to him each day gave Enroth a unique apprenticeship.

“He’s been an understudy to one of the best goaltenders in this business for a few years now,” Nolan said. “So when you have a chance to study from somebody of Miller’s caliber and it’s your turn, that’s what development’s all about.”

Neuvirth, meanwhile, has been reunited with Arturs Irbe, his goalie coach in Washington. The Czech enjoyed his best NHL season under Irbe in 2010-11, going 27-12-4 with a 2.45 goals-against average and .914 save percentage in 48 games.

“Every player has certain buttons to push,” said Nolan, who hired Irbe in August. “When he was in Washington, he had a good time working with Arturs, and Arturs seems to know what buttons to push with this young kid, and he’s going to learn about Enroth, too.”

“I feel like he trusted me,” he said. “He likes to talk about stuff. He’s a good motivator.”

Neuvirth never hit the 40-game mark in Washington after Irbe left. He later lost his job to Semyon Varlamov and Braden Holtby.

“I don’t know,” he said. “It just didn’t work out. The whole time I was in Washington I had tough competition. I was drafted with Varlamov, and he was always ahead of me.”

He added: “This is a fresh start and a new opportunity. I put the last two years behind me.”

Reinhart, whose every move will be dissected as he fights to crack the NHL out of junior, feels OK under the microscope.