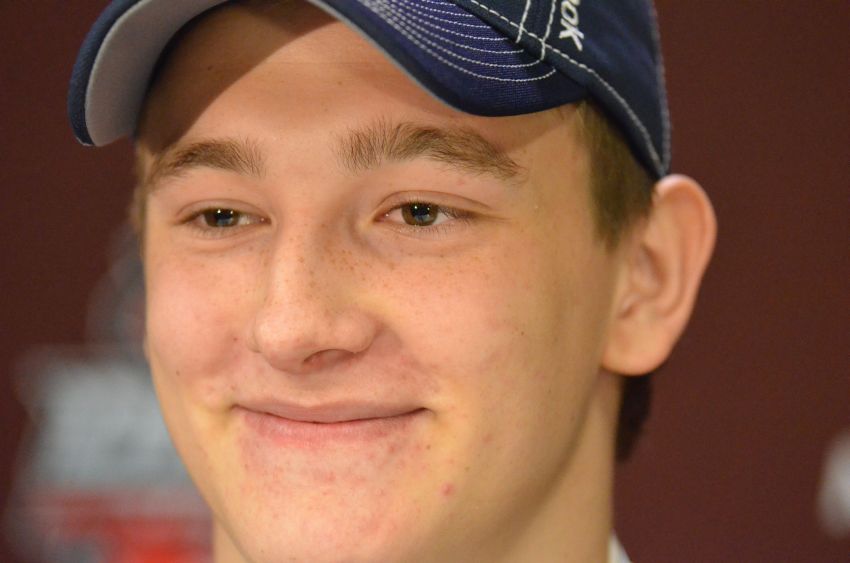 NEWARK, N.J. – It was “pretty close,” general manager Darcy Regier said. The rebuilding Buffalo Sabres could’ve moved up to the No. 5 slot during the NHL Entry Draft, perhaps picked a familiar name the team’s fans had been drooling over.

Ultimately, however, the Sabres decided trading with Carolina wasn’t worth the steep cost. Instead, they kept the eighth overall pick, grabbing big defensemen Rasmus Ristolainen to start their busy day.

By the end of Sunday’s marathon draft inside the Prudential Center, the Sabres had picked 11 players – seven forwards, three defensemen and one goalie – swapped defensemen with Carolina – left-handed shot Andrej Sekera for right Jamie McBain – and, perhaps most notably, kept starting goalie Ryan Miller and high-scoring winger Thomas Vanek (at least for now).

Regier said he’s “absolutely OK” entering next season with the veteran stars, who both have a year left on their contracts.

“No doors are closed,” Regier said.

More on Miller and Vanek later. First, the defensemen the Sabres picked early.

The 18-year-old Ristolainen, who spent the last two seasons playing with TPS Turki in SM-liiga, a major European men’s league, believes he can step into the NHL right away next season and calls himself a “two-way defender.”

Ristolainen had three goals, 15 points, 32 penalty minutes and a minus-7 rating in 52 games last season.

“I think I’m a two-way defenseman,” said Zadorov, who roomed with Sabres center Mikhail Grigorenko at the world junior championship. “I’m a big guy and I can play a physical game. I just go out and I can do body checks and open-ice hits and I can shoot and score goals.”

Regier believes Ristolainen could crack the NHL next season because he spent two seasons playing in the SM-liiga, a European men’s league.

“He’s got a good chance to play in the league next year,” Devine said.

After Zadorov, the Sabres wanted JT Compher badly, and even explored moving up late into the first round to grab the American center.

Then, early in the second round, Carolina called. For the 27-year-old Sekera, a veteran of 339 NHL games, received the 38th pick from Carolina (and took Compher) and the 25-year-old McBain, who had an off year last season.

“Hopefully, we can get him back on track,” Regier said.

While teams made several trades, none of the predicted fireworks materialized.

“The draft is at the forefront,” Regier said early in the day. “I think you’ll see free agency next, including the buyouts, and then I think teams will re-evaluate their position situations and go from there, whether that changes our situation with respect to Ryan and Thomas, I don’t know.”

“I honestly go into these days expecting anything,” he said.

Regier said he spoke with Miller’s agent, Mike Liut, last week, and Vanek’s agent, Stephen Bartlett, on Saturday. He plans to chat with both soon.

Everything, Regier said, will become clearer in the next week. Free agency begins Friday. The Sabres still have no plans for any buyouts, he said.