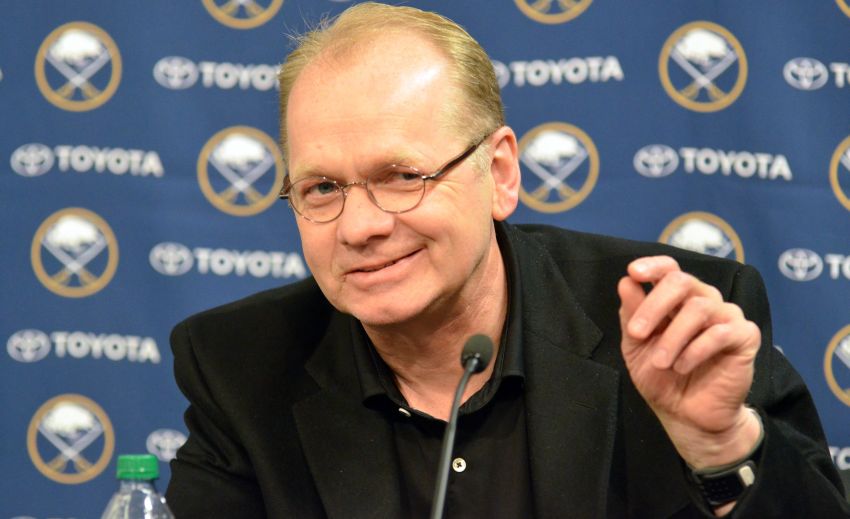 Darcy Regier is trying to be realistic about the Sabres landing an early draft pick. ©2013, Dan Hickling, Olean Times Herald

Still, despite a slew of assets, Sabres general manager Darcy Regier said Thursday securing one of the top three selections – future stars Jonathan Drouin, Seth Jones and Nathan MacKinnon are likely to get picked – will probably be “impossible.”

Colorado, Florida and Tampa Bay possess the first three picks. The Sabres will keep trying to move up until the June 30 draft in Newark, N.J., however. They’ve also spoken to teams picking behind them.

“We’re exploring all the options,” said Regier, who re-signed backup goalie Jhonas Enroth to a two-year, $2.5 million contract Thursday, according to capgeek.com. “We’ll continue to try to move up. But it appears now teams are getting more locked into keeping the pick and making the selection at that place.”

Regier believes if the teams in the three, four and five slots – Nashville, Carolina and Calgary – don’t get the player they’re targeting, the field could possibly change.

Whatever happens, the Sabres are confident they’ll get good players early.

“At eight we’re going to get a top-six forward or top-four defenseman,” amateur scouting director Kevin Devine said. “I think it kind of runs both ways. We’re going to get two good players here, but the cost of what we’d have to give up to get that franchise player would also set us back depth-wise.”

Naturally, Regier said the Sabres will explore all options with Miller and Vanek.

“One of those options is that those players will remain here next year because the market is going to dictate to (a) large part what we’re able to do in order to help the organization,” he said.

“Part of that’s predicated on what we do,” he said.

Although buyouts run from 48 hours after the final ends until July 4, Philadelphia jumped the gun Thursday, announcing it planned to eat the final two seasons of former Sabres star Daniel Briere’s contract.

“I don’t think Danny was the same player he was with us, but I still think he’s a very capable NHL player and won’t have any problem finding employment because he can still play and contribute,” Regier said.

Would the Sabres be interested in the 35-year-old center?

“Let me think on that,” Regier said.

One of those individuals was believed to be Lake Superior State’s Jim Roque.

Notes: Regier is still working on filling Rochester’s opening coaching job. Chadd Cassidy took over on an interim basis when the Sabres promoted Rolston on Feb. 20. Regier said Americans players thought Cassidy and assistant Chris Taylor did a “terrific job.” … Regier said some restricted free agents in Rochester might not be tendered a new contract. … The Sabres have had preliminary talks with center Cody Hodgson, a restricted free agent.