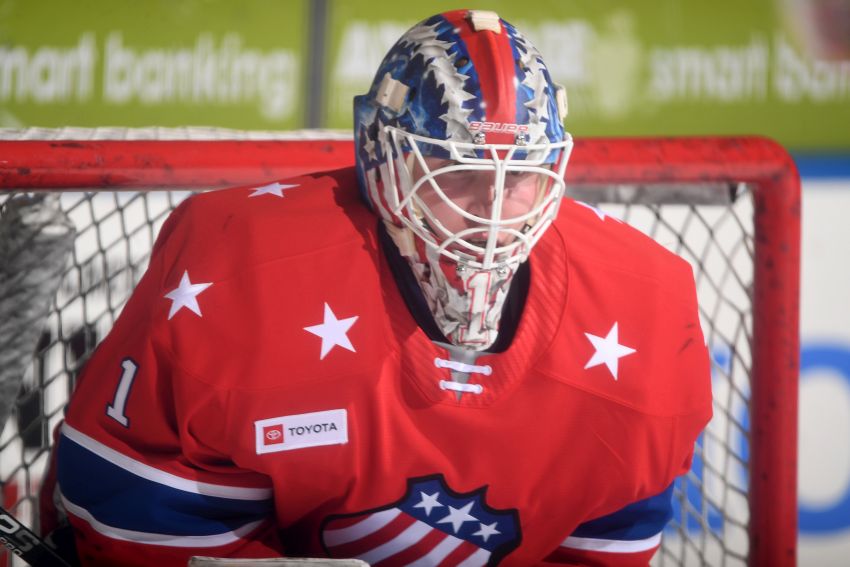 Yes, Luukkonen, 22, has looked sloppy at times since the Amerks’ COVID-19 pause ended late last month, compiling a 2-3-1 record and an awful .863 save percentage.

But a lot of players struggle after being forced to sit idle. Luukkonen did not play for three weeks.

“His work ethic has been fabulous this year, the way he goes about every day,” Appert said on a Zoom call Monday. “He really approaches things like a pro now.”

Right now, Luukkonen is close to making NHL debut. The Sabres recalled their top goalie prospect to the taxi squad Saturday. Interim coach Don Granato said they plan to award him a start.

Granato wants Luukkonen, who recently suffered a lower-body injury, to practice and be with the team before he plays. So goalie Dustin Tokarski will likely start tonight’s game against the Boston Bruins at KeyBank Center.

The Sabres also host the Bruins on Thursday and Friday, so Luukkonen could play one of those contests.

Of course, the 6-foot-4, 220-pound Luukkonen needs more seasoning. The Finn has played just 25 AHL games and another 23 contests in the ECHL. Goalies often must hone their craft at least a few years in the minors.

His stint in Buffalo could be brief, perhaps just a one-game look.

“He’s ready,” Appert said. “No goalie’s totally ready at the age that he is. It’s a lot easier to play at that age as a defenseman or a forward. But I feel confident that he’s going to handle the opportunity very well.”

Appert, a former college goalie, has seen Luukkonen evolve. He coached against him on the international stage and said he saw a young player who possessed “elite” athleticism and competitiveness.

“I thought there were things we could take advantage of from a style standpoint,” Appert said. “I think he’s cleaned a lot of those things up.”

Luukkonen, a second-round pick in 2017, 54th overall, has worked to become more than simply a big body blocking pucks.

“He’s much stronger in his frame, his skating is stronger, he’s holding his feet, and that allows you to use that athleticism to your advantage,” Appert said earlier this season.

Luukkonen said he learned as a rookie last season he needed to have more structure in his game.

“I was kind of behind the play all the time, so I think that’s one of the main reasons why I feel more comfortable here this year,” Luukkonen said earlier this season.

Appert said Luukkonen has grasped his drive and talent will only take him so far.

“You get to the second-best league in the world and you get exposed for some of those habits,” Appert said. “And then that’s a good thing, because it challenges you to change and to grow and to create better habits, which are going to allow you to have success in the National Hockey League.

“UPL has done those things. He’s really worked hard to acquire the habits he needs to not only be successful here, but to give him a chance to be successful in Buffalo.”

Appert said after Luukkonen prepares for practice, they go on the ice and spend seven minutes working on “his skating inside the crease.”

“Then he puts another 15 minutes on his goaltending habit,” he said. “This is all before practice, right? And then he goes and attacks practice.”

Following practice, Luukkonen works out with the Amerks’ strength coach and also walks uphill on a treadmill.

Appert said Luukkonen has constructed a base of confidence around his habits and work ethic while strengthening his body.

“He can handle the weight that he’s added,” he said. “He’s at a really good weight. But he’s a big, strong kid and that’s a lot of weight to move around for a 21-year-old.”

Notes: Sabres center Casey Mittelstadt has a three-game point streak and has compiled seven goals and 10 points in his last 11 games. Mittelstadt scored seven goals in 59 games before his goal March 31 kicked off his torrid run. … The Amerks on Monday received defenseman Nick DeSimone, an East Amherst native, on loan from the Vegas Golden Knights. The San Jose Sharks recently traded DeSimone, 26, to Vegas. He had spent the last four years with San Jose’s AHL affiliate, the Barracuda. … Ex-Sabres forwards Taylor Hall and Curtis Lazar, who were traded to the Bruins on April 12, have each played four games for their new team. Hall has already scored two goals for the Bruins, equaling his meager 37-game output with Buffalo. … The Sabres had Monday off.