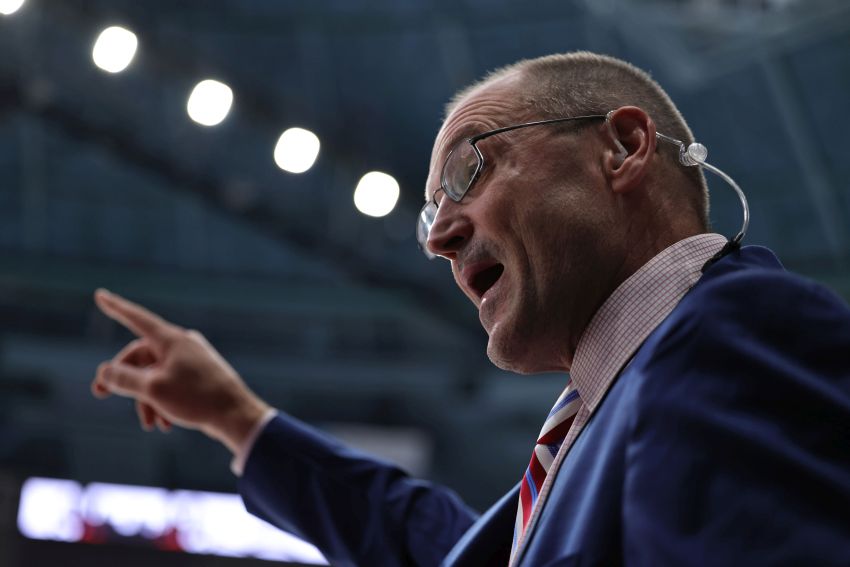 Dan Bylsma will likely only be in Charlotte one season. ©2022, Charlotte Checkers

ROCHESTER – Dan Bylsma laughed and processed the question a little longer. He started to answer it but stopped again to collect his thoughts.

After three lean years as an assistant coach with the Detroit Red Wings, did the ex-Buffalo Sabres head coach need a new adventure?

“We were in a different spot in Detroit with the team and the players,” Bylsma told the Times Herald on Wednesday following the Charlotte Checkers’ 5-1 loss to the Americans at Blue Cross Arena. “It’s energizing to … try to get and try to build a winner, try to build the players up. I’m happy for that opportunity.”

After Bylsma, 51, and the Red Wings parted ways last May, his fresh opportunity materialized in a unique place, the minors. He’s an assistant coach with the Checkers, the American Hockey League affiliate the expansion Seattle Kraken share with the Florida Panthers this season.

While Bylsma’s a Kraken employee, he coaches every player and runs the defense. The NHL teams each send about 12 players to Charlotte.

How rare is it for a coach of Bylsma’s stature to be in the minors? Well, Bylsma, who led the Pittsburgh Penguins to a championship in 2009, is the first head coach of a Stanley Cup-winning team to coach in the minors since Jean Perron in 1997.

Perron, who led the Montreal Canadiens to the Cup in 1986, was head coach of two International Hockey League teams: the San Francisco Spiders in 1995-96 and Manitoba Moose in 1996-97.

Bylsma, who coached the Sabres in the 2015-16 and 2016-17 campaigns, acknowledged he wants to be a head coach again someday. But right now, he’s enjoying his opportunity to develop talent eager to learn and reach the next level.

He repeated several times his experience in the AHL is “energizing.”

Bylsma said he’s “disappointed” he couldn’t do that with the Sabres.

“I wasn’t able to convey that to the group and the team, and it ultimately showed up in wins and losses,” he said. “That’s something where I’m at now, that’s something I long to be able to do when I get back to that opportunity.”

By the end of Bylsma’s two-year tenure in Buffalo, the massive strides the Sabres had made in 2015-16, his first season, felt like a distant memory.

After emerging from a two-year tank and improving 27 points with rookies Jack Eichel and Sam Reinhart, the Sabres regressed in 2016-17, mustering just 78 points and finishing last in the Atlantic Division.

Some players clearly soured on Bylsma and tuned him out, and the Sabres fired him with general manager Tim Murray following the disappointing year.

Bylsma might be running his own bench again as soon as next season, when Seattle’s AHL affiliate, the Coachella Valley Firebirds, are scheduled to begin play.

As the lone Kraken coach with Charlotte – head coach Geordie Kinnear is a Panthers employee – he could take over the Firebirds. Nothing official, however, has been announced.

When ex-Sabres GM Jason Botterill, now Seattle’s assistant GM, called Bylsma and asked him about joining the expansion team, he jumped at the chance to build something from scratch.

Goalie Michael Houser cleared waivers on Thursday and was assigned to Rochester.

The NHL on Thursday announced defenseman Rasmus Dahlin, the Sabres’ only NHL All-Star, will participate in in the accuracy shooting at tonight’s Skills Competition.