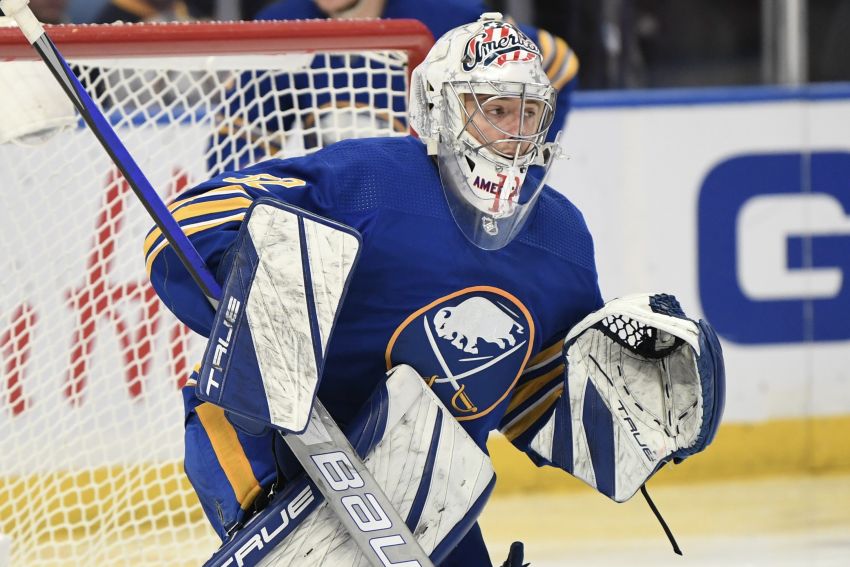 Houser, 29, was the team’s only healthy goalie prior to entering protocol. He started practicing Friday morning inside LECOM Harborcenter before leaving the session.

Houser is the sixth goalie the Sabres have lost to injury, illness or suspension.

The Sabres flew Friday afternoon to Arizona, where they continue their road trip tonight against the Coyotes.

What will the Sabres do in net? Well, goalie Craig Anderson is expected to be available for tonight’s game, general manager Kevyn Adams said Friday morning.

Anderson, 40, hasn’t played since suffering an upper-body injury Nov. 2. The veteran started practicing last Friday and began ramping up his workload this week.

The Sabres, having lost goalie Aaron Dell to a three-game suspension, desperately needed Anderson in at least a backup role before Houser entered protocol. Now he might be forced to play right away.

They also face the Colorado Avalanche on Sunday and the Vegas Golden Knights on Tuesday before the NHL All-Star break begins.

Shortly before the Sabres lost Houser, coach Don Granato said he was hopeful Anderson could play one of the games this weekend. The team needed to see how Anderson responded to Friday’s practice.

Anderson looked sharp early this season, compiling a 4-2-0 record with a 2.50 goals-against average and a .921 save percentage in six games.

Meanwhile, goalie Dustin Tokarski, who’s still dealing with the effects of COVID-19, accompanied the Sabres on their trip. Tokarski, 32, has been practicing this week and went through a full session Friday.

Adams said Tokarski is “day to day,” although he still has a little ways to go. Tokarski hasn’t played since entering protocol Dec. 2.

Could Tokarski return during the road trip?

“It’s possible but I don’t know,” Tokarski said. “As everyone’s been telling you, it’s a day-to-day thing. I wish I could give you more but that’s actually the honest truth with it. Some days you feel something, some days you don’t.”

Adams said before Houser entered protocol the Sabres might have to utilize an emergency backup if Anderson can’t dress for the game.

In other news, Granato said the Sabres have shut down winger Zemgus Girgensons until after the break. A lower-body injury sidelined Girgensons five straight games before he returned for Tuesday’s 5-0 road loss to the Ottawa Senators.

Granato said the Girgensons, who did not practice Friday, aggravated an area where he had his previous injury. The team believe it will heal with some rest.

“We just feel playing games will produce more wear and tear, aggravate it playing games and skating,” Granato said. “He looked great yesterday in skating but it was bothering him. So it’s not inhibiting his skating. It’s something that’s there and for peace of mind we want to make sure it’s definitively a situation that we think will resolve, so we’re going to wait for that to happen.”

With Girgensons out, John Hayden or Mark Jankowski could move into the lineup.

Meanwhile, winger Kyle Okposo is expected to return tonight from an upper-body injury that has sidelined him three games.