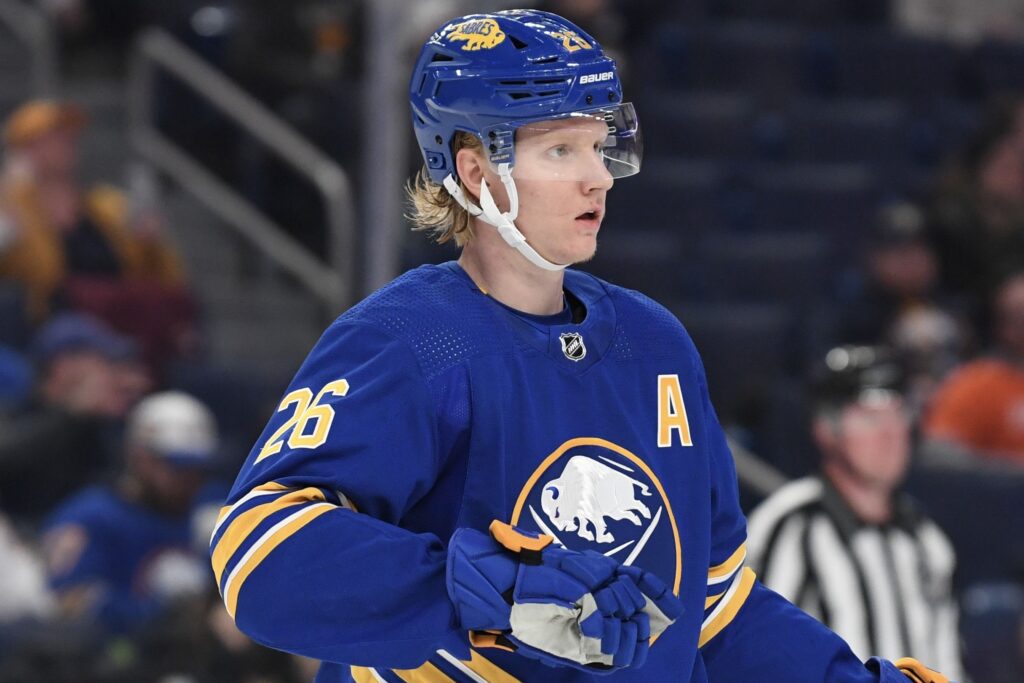 Rasmus Dahlin has elevated his play since a rough outing Nov. 29. ©2022, Micheline Veluvolu

BUFFALO – For Sabres defenseman Rasmus Dahlin, earning a spot in the NHL All-Star Game is more than an honor. His first selection to the prestigious event is an affirmation.

“It’s very exciting and makes me proud, for sure,” Dahlin told the Times Herald following last Friday’s practice at LECOM Harborcenter. “And then it makes me get more confident. It’s accepting that I’ve done stuff right.”

Over the past two months, Dahlin, 21, has done a lot of things right, developing into perhaps the Sabres’ most consistent and valuable player.

“I’m taking the next step in a lot of areas, but it’s mostly been my overall game,” Dahlin said of the strides he has made in his fourth NHL season. “I want to be a two-way D, I want to be a player that the coach can trust.”

The Swede’s campaign can be examined in two parts: his first 22 games and his last 22 outings.

In the first half, which he capped with a disastrous outing Nov. 29 against the Seattle Kraken, he sometimes looked raw and overwhelmed. But since the beginning of December, he has showcased his growing confidence and often performed like a future star.

Dahlin’s before and after numbers don’t show much of a difference.

But the eye test illustrates the significant steps Dahlin, the first overall pick in 2018, has made in just a short time. He’s more composed and sound defensively while also moving the puck with greater frequency.

What has helped Dahlin reach another level?

“Experience, opportunities from the coaches,” he said. “I mean, this is a year I’ve grown a lot. I’m on a good path but I’m not done, I feel like. I don’t know. It’s a great question, but believe in yourself. It’s been a long ride, so I’m happy things are starting to get better.”

Sabres coach Don Granato said earning a spot in this afternoon’s game “reinforces the commitment he’s put in, the work and sacrifice.”

“He practices as hard and competitively and probably endures more in a game than just the average player because he’s got a bullseye on his jersey every night and he battles right through it,” he said. “So this is really not only great honor for him, but a boost, I would think, to his confidence.”

On Oct. 31, Sabres winger Victor Olofsson scored his fifth goal this season in just the eighth game, a 3-2 loss to the Kings.

Olofsson, 26, hasn’t scored since then, a stunning 28-game drought.

Asplund, 24, has scored just once in 35 contests since then.

What has happened to them? Olofsson scored 33 times in his first 118 NHL games.

“Olofsson and Asplund, there’s two components that can come to mind: just straight out how many goals they’ve scored or points, and then the secondary component is how are they playing,” Granato said on a Zoom call Tuesday. “And I can tell you both of them are playing hard, competitive and better recently.”

Granato said if Olofsson and Asplund keep doing that, they’ll inevitably get rewarded.

“They’ve kind of put the throttle down on the compete level, they’ve elevated that, they’ve responded the right way,” Granato said. “And … the signs are, the way they compete in a practice, the way they prepare for a game, they’re going to keep playing well and eventually that’s going to turn for them as far as converting. But I’m happy the last few games the direction they’ve gone.”

Olofsson, often a lethal presence from the circle on the top power-play unit throughout his first two seasons, has been moved to the second unit.

“That slot is different, so you can’t expect him to score,” Granato said. “He’s not going to get all those scoring chances that he got there, and he’s learned to deal with that in a competitive way, which is great. I like that response.”

Notes: Center Peyton Krebs and defenseman Mattias Samuelsson played for the Americans in Friday’s 5-2 loss to the Charlotte Checkers, their first game since the Sabres assigned them to Rochester on Wednesday. … Goalie Aaron Dell has started both of Rochester’s games since the Sabres sent him to the AHL. … Dahlin on learning from general manager Kevyn Adams he would represent the Sabres at this afternoon’s game in Las Vegas: “When I got the call from Kevyn, I was kind of in shock.”