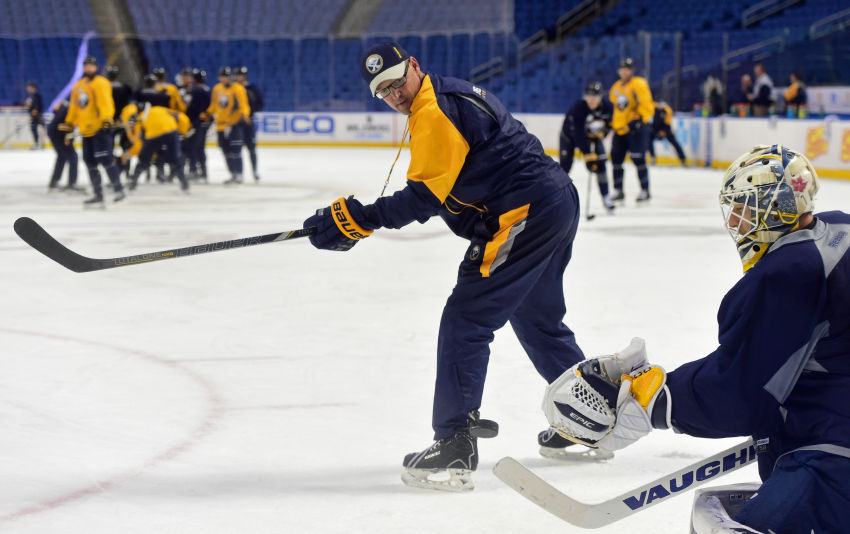 BUFFALO – In his season out of the NHL, Sabres coach Dan Bylsma occasionally got lost and took some time away from the game that had consumed his adult life.

He went fishing and hunting, an activity he could never enjoy, and spent more time with his family. There were, of course, hockey activities, too, like some guest coaching and analyst work.

But Bylsma, 45, mostly spent the year studying the league closely. With no job and strong aspirations to get back in the game this season, he developed a plan to return as a better coach.

“I started scouting every team in the league,” Bylsma said recently inside the First Niagara Center. “So I watched a lot of hockey games.”

It was widely assumed Bylsma, who planned to take last season off, would land another coaching gig whenever he wanted to return. The NHL recycles its coaches, and while some underachieving Penguins teams helped Bylsma lose some of his shine, Stanley Cup winners don’t stay unemployed long.

Still, Bylsma, who was fired in June 2014, began the year with “a fair amount of trepidation.”

Bylsma’s Pittsburgh contract ran through 2015-16. At one point, his wife, Mary Beth, said if he didn’t work for two years, their son, Bryan, would be in 11th grade at his high school. She suggested perhaps her husband should look for work after Bryan graduated.

“Two years out of the game, I’ll have to reintroduce myself,” Bylsma said. “So … it’s fairly lonely sitting at home looking at the game from the outside. So, yes, there’s definitely that trepidation.”

Bylsma tried to ease any fears by narrowing his focus.

“I noted a few teams I wanted to look at more extensively in terms of how they play and what they do in different areas of the game,” he said.

So Bylsma picked five coaches – he didn’t reveal which ones – and examined their personnel use in different facets of the game.

“It really had nothing to do with what was going on on the ice other than the matchup, the players they put out there and what the other team was doing and where it was at,” he said.

Bylsma’s name occasionally materialized in rumors, something that “kind of motivated me into being ready,” he said.

As the season progressed, he zeroed in on about seven teams he believed could have a coaching vacancy.

“Then I started looking at those seven teams and their rosters and their depth charts and their situations and prepared for that possibility,” Bylsma said.

At about that time, Bylsma visited an old teammate, current Sabres assistant coach Dan Lambert, who coached the Western Hockey League’s Kelowna Rockets. The two had reconnected at a coach’s clinic in 2014, and Lambert would occasionally call Bylsma when he had some questions.

Lambert asked him to fly out to British Columbia and spend four days with his junior club.

Earlier in the season, Bylsma spent some time in Rochester with the R.I.T. Tigers, an NCAA team coached by Wayne Wilson, an assistant during Bylsma’s college days at Bowling Green.

“He probably could’ve moped around and did nothing,” Wilson said. “He was still very engaged in the game and involved. He didn’t sit idle for a year, that’s for sure.”

In Kelowna, Bylsma ran some practices and dissected the team.

“There wasn’t a whole lot of sleep and there was a lot of conversation and communication,” Lambert said.

Lambert could sense Bylsma was anxious to get back into coaching.

“There’s no doubt that he was excited to get back on the ice,” he said. “But I think he was excited. He’s got such a passion for the game that certainly came out in those four days.”

Before Bylsma left to serve as an assistant coach with Team USA at the world championship in the spring, he contacted general manager Tim Murray about the Sabres’ coaching vacancy. Bylsma, no doubt, had been studying the team. The two agreed to talk when Bylsma returned.