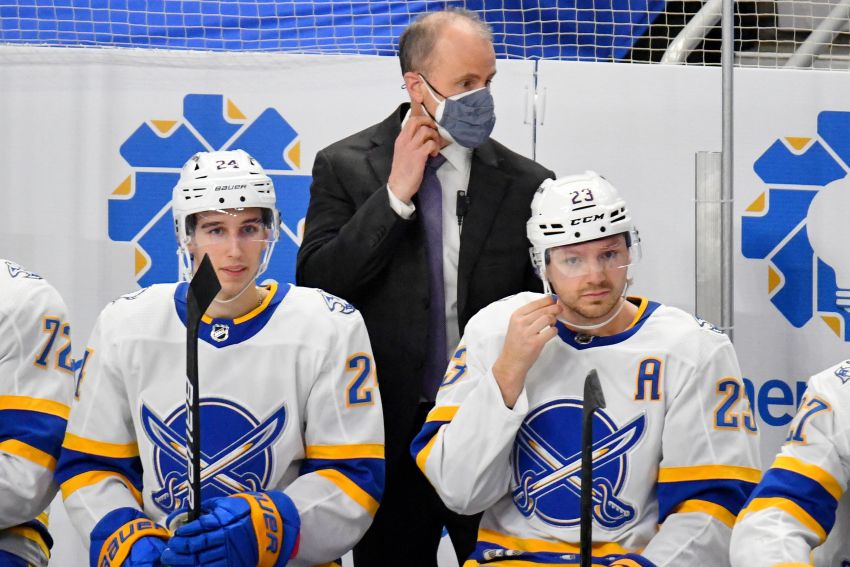 For the time being, Don Granato, a 53-year-old hockey lifer who has spent the last 27 years coaching or scouting in pro, college and junior, is leading the hapless Buffalo Sabres.

The Sabres on Wednesday named Granato their interim coach after firing Ralph Krueger in the midst of a 12-game losing streak.

Granato, who joined Krueger’s staff as an assistant last season, will be behind the bench tonight against the Boston Bruins at KeyBank Center.

“Don Granato’s been a head coach for many years at different levels – professional hockey, he’s been in the college game, he’s been in the national program, has a development background, has a teacher kind of mentality, so he’s commanded a room as a head coach before,” Sabres general manager Kevyn Adams said on a Zoom call.

Adams, who inherited Krueger, said the search for a new coach will begin immediately. He wouldn’t put a timeline on hiring someone.

“For me, it’s about getting it right,” Adams said. “If we felt it was absolutely the right person and it happens quicker then OK. … It’s so important, the people and how we move forward. We have to make sure on this.”

“It’s so important, the people and how we move forward. We have to make sure on this.”

The job, of course, isn’t exactly attractive. The Sabres have burned through five coaches – Ron Rolston, Ted Nolan, Dan Bylsma, Phil Housley and Krueger – since the beginning of the 2013-14 season, a stunning number that illustrates their futility.

If you’re an established coach or a notable coaching prospect, why would you join an organization with a history of dysfunction and losing? The Sabres haven’t made the playoffs in 10 years. Adams in their third GM in less than four years.

Adams wouldn’t reveal much of what he’s looking for in his next coach.

Adams, who was hired in June, acknowledged he has been thinking about the attributes and characteristics he believes will be important for the organization.

“There will be a lot of people that I will speak to,” he said. “There will be other people part of the process as we go along. But what I don’t want to do is rush into anything or make a quick decision without truly taking as much time as we need because this is about getting it right. It’s great to say, ‘I’m looking for this or that,’ or ‘They have to have this or that.’ This is about getting the right person and it’s critical.”

Adams said he places an importance on coaches who build relationships, something Krueger did over his short tenure.

“You need to build trust and relationships with players, but there needs to be an accountability that goes with that,” he said. “That’s something I just think is really important overall and I think every player that’s played understands that too. That’s what players want.”

Granato has been a head coach for 17 seasons during career. He started with the junior United States Hockey League’s Wisconsin Capitols in 1993-94. After moving up to pro hockey, he won a championship with the ECHL’s Peoria Rivermen in 1999-00.

He parlayed that season into a five-year AHL gig coaching the Worcester IceCats. He led another AHL team, the Chicago Wolves, following a one-year stint as an assistant with the St. Louis Blues in 2005-06.

Granato coached a young Jack Eichel, who’s now Buffalo’s captain, during his time with USA Hockey’s National Team Development program. He has also been an associate coach under his brother, Tony, at the University of Wisconsin, and an assistant with the Chicago Blackhawks.

Their sister, Cammi, was inducted into the Hockey Hall of Fame in 2010 and is currently a scout for the Seattle Kraken. Tony Granato scored 30 or more goals four times in his 13-year NHL career.

Don Granato was hospitalized in intensive care with severe pneumonia early last season and missed nearly two months. Following the Sabres’ COVID-19 pause last month, he briefly fulfilled his coaching duties from a suite instead of the bench.

The Sabres haven’t hired an assistant for Adams, who had no front office experience before becoming GM.

“If you go back to June, one of the things we talked about is finding the right people and kind of maybe catching my breath and understanding everything that was going on and evaluating where we see that we need to fill in, knowing all along that we absolutely had to fill in certain roles,” Adams said. “That’s something that I’m working on right now.”

The Buffalo News reported the Sabres have received permission from the Penguins to interview Jason Karmanos, who’s still under contract with Pittsburgh. Karmanos has served as an assistant GM with the Penguins and Carolina Hurricanes.

Adams said the Sabres are hopeful Eichel, who’s out indefinitely with an upper-body injury, can return this season.

“It’s been out publicly that he has to serve a quarantine after getting a second opinion (out of state), so we’re almost out of that situation and we’ll be reevaluating,” he said.

Adams said development coach Dan Girardi, who has been shifted behind the bench to replace Steve Smith, will likely miss tonight’s game because of quarantine rules. The Sabres might summon Rochester Americans coach Seth Appert to fill in.

Girardi, 36, played 927 games as an NHL defenseman, mostly with the New York Rangers.

“(He) was very, very well respected in the league when he played,” Adams said. “High character, high compete, thought the game very well as a defenseman, which I thought would be very helpful in short time to bring a fresh perspective.

“I’ve been extremely impressed with Dan in his role as a development coach on our staff for the past few months, the attention to detail he’s showed, the discipline, the amount of work he’s done with our prospects. There’s always transition and kind of finding our way.”

Adams said Matt Ellis, who was also shifted behind the bench, will continue in his role as the Sabres’ director of player development.